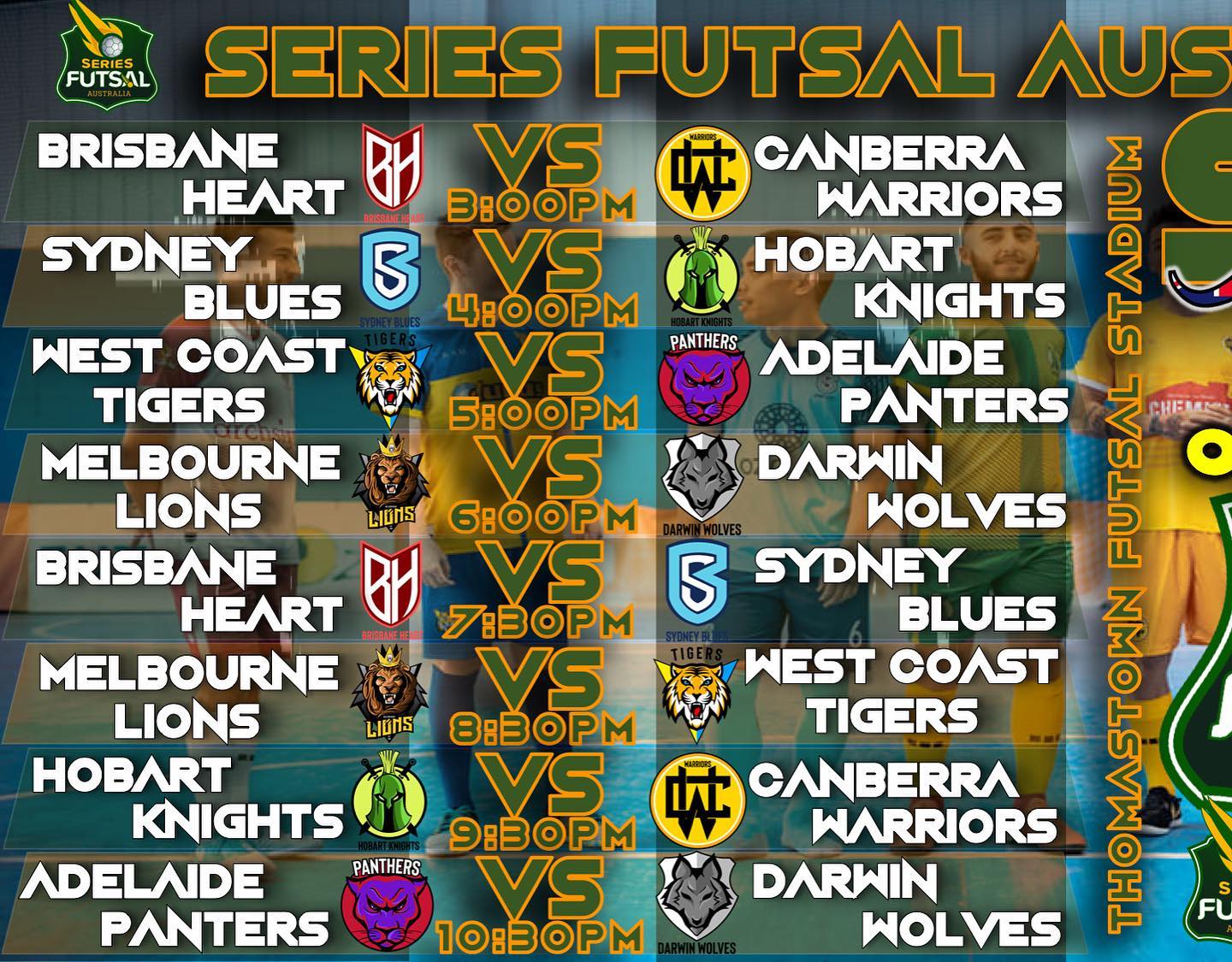 Our first half saw both sides hungry for the opening win but it was the Sean Garnier show as he scored first emphatically and assisted Ubeyde Cicek’s power-strike to go 2-0 up early. Joshua Pulvirenti gave his side hope from close range twice scoring a brace but it was Enrique Pimenta who stretched the lead with a #ridiculous longshot and celebration with fellow show-stealer Garnier. A goal from Nam Pham saw Canberra Warriors reach a 4-2 lead to close the half.

The second half provided more competitive flare as Garnier scored early again to continue his first match domination. Thomas Brossard got his first of the night through a controversial side-ball block from Pimenta, but it was Ernie Simsek who kept Canberra on their toes. Khaled Ayache headed the ball into his own net scoring a horror own goal and immediately subbing himself off, but that was all as the Warriors won 6-3 in our opener.

The first half kicked off fast with Lucas Vaz scoring off of a Cosimo Russo rebounded strike off the post early. The lead was doubled when Vaz got his brace.  Both teams pushed for the third of the match but it was Hobart’s Nicholas Jurcic who scored an emphatic free kick from the half way line to close the half positively for his side.

The game remained close and it was Jordan Constantinidis who equalised for Hobart Knights with a composed finish. Cosimo Russo continued his rediscovered goal-scoring form after a number of saves from Frano Saric, connecting with a well-struck volley to take the lead back. Michael Lettini struck a volley of his own followed by passionate celebrations to take the match into penalties.

Durim Cura and Vaz both scored for their respective teams but it was Lettini who was the difference, complimenting Saric’s saves with a goal to win the match.

Our third match of Series Futsal Australia pitted Vagner Pula’s West Coast Tigers against Adelaide Panthers and much like the opening fixture, the match began with a bang from the veteran in Pula as he fired a distanced volley to take the early lead. Caleb Ulrich doubled the deficit with power and pride as he struck hard and low from range.

Although the half began with a wonder strike from James Ignatidis for the Panthers, Scott Rogan, Ulrich and Tal Galper all fired goals of their own to further the lead and begin the tournament with the greatest goal difference.

The first half saw Melbourne Lions hold possession with confidence as they knocked on the door of the opening goal relentlessly. Darwin Wolves demanded credit though as they did have their fair share of shots to test Felipe Bley but it was Andre Caro who scored the only goal of the half with a powerful strike across goal into the bottom left corner.

The second half saw Alejandro Gomez score after dribbling past two players and firing confidently to double the lead. After taking shot after shot, Melbourne added another to their tally through Jake Besenyi. A well-worked free kick orchestrated by Caro saw Besenyi score and celebrate with crowd members. An injury to Bley meant Aaron Yu finished the game between the sticks, but he only added to Darwin’s frustrations making fantastic saves. Joao Da Silva scored from close range and Jose Filho added the only Darwin goal from the penalty spot to finish the game at 4-1.

It was time for our second round of fixtures for the night and it was must-win for Brisbane and Sydney as the two winless teams went head to head. Sydney were looking to maintain their attacking pressure from their first game as they struck three early goals in very quick succession. A goal from Cosimo Russo off of a side-ball lay-off followed by a brace of confident and decisive finishes from Muhamed Temel saw the blues up 3-0 early. A goal from Stephen Gustus for Brisbane allowed his side to begin the second half with hope.

Both sides weren’t backing down as the next goal could act as the decider. It was Cosimo Russo who scored another to add to his tally for the tournament from an almost identical position as his first of the match. Ernie Simsek would fire home a goal to turn doubters into believers, but Russo was there to shut Brisbane down again with another goal to make his hattrick. Moe Matar closed the game with a beautifully taken chip but it was too little too late for his side.

This was a certain match of the night candidate and provided nothing but competitive flare with both sides putting on a show for the packed crowd. It took a while but the opener came through Caleb Ulrich who was already exemplifying a fantastic tournament. Melbourne Lions’ main man Kevin Dos Santos found himself scoring from close range from a quick counter attack followed by passionate celebrations with players and substitutes. It was all square and game-on for the second-half.

Our second half was almost identical to the first, as Tyler Garner opened the half with a deflected strike to steal the lead back. Much like the first half, Melbourne Lions wouldn’t allow the Tigers to get comfortable as they clawed back into the game through a strong Andre Caro strike. Both teams were firing but it was a brilliantly taken Fernando De Moraes free kick the flowed under the wall and into the back of the net to allow West Coast to take the lead for the third time. Vagner Pula closed the game off with an emphatic penalty to keep his side undefeated in the tournament.

This match was another for the cameras as Sean Garnier took no prisoners with his incredible footwork but it was Series Futsal legend Sofiane Soufi who opened the scoring with greatly placed bottom corner finish from just outside the penalty area. His celebrations were just as fantastic as he used a stole a megaphone from the crowd and started a chant of his own. Jayden Mercieca equalised powerfully but it was Ubeyde Cicek’s goal into an open net that closed the half at 2-1 to Canberra.

The game remained a tight affair with not only plenty of skills on show but also top goalkeeping performances as both sides knocked on the door of a goal. Both teams fought hard but it was Fabio Albuquerque who fired low and hard to stretch the lead and inevitably win the game for Canberra.

Our last match of day 1 pitted two sides in need of a win as Darwin Wolves and Adelaide Panthers faced off. Wolves kicked off the scoring through miracle-man Jose Filho but #10 was having none of it, firing home a chipped, volleyed strike from his own half to equalise. It was a goal of the tournament candidate indeed but it was cancelled out by #12 who found himself 1 on 1 with the keeper and calmly finishing into the top corner. Hayden Kanjo closed the half with a goal to top off a fantastic run after beating his man and the goalkeeper with composure.

The last half of Series Futsal Australia of the night saw both sides struggle to break each other down, but it was Joaquin Jimenez who finished a powerful bottom corner strike. It was a controversial goal that followed a potential handball, but it was irrelevant as the match finished at 2-3 to Darwin.