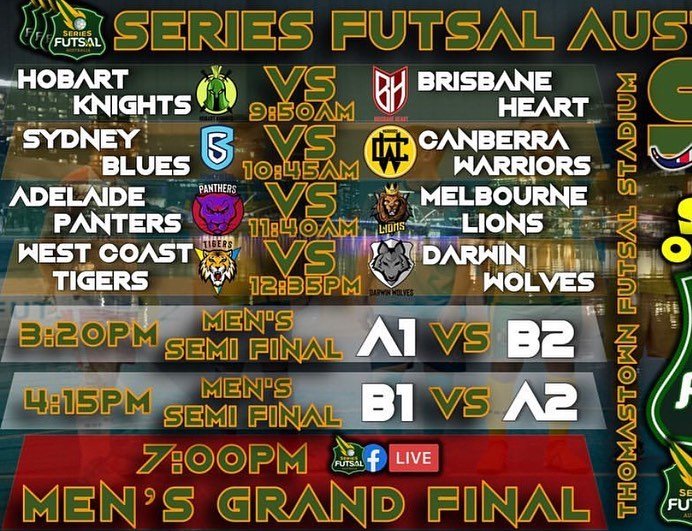 It was the beginning of Day 2 and we kicked off with a goal from Connor George who looked to redeem his sides poor form in the Series Futsal Australia tournament. The winless Brisbane Hearts couldn’t get comfortable though with Zois Galanopoulos firing from range low and hard to equalise for Hobart. Mark Saric took the lead for his side from close range but it was a well-given pass from the teacher Joshua Pulvirenti to Moe Matar that allowed Brisbane to equalise and stay in the game.

The second half saw Stephen Gustus take the lead back early with a strike from the left-flank, and it was George who contributed to another goal by squaring Pulvirenti to double the deficit. Mark Saric scored to off of a fast break to give his side hope and it was Jordan Constantinidis who made the comeback official by equalising at 4-4. The game looked destined for penalties with Hobart taking their fought off the gas in the dying seconds, which allowed Moe Matar to capitalise and score on the final whistle to win the match. The last-gasp goal allowed Brisbane to collect their first win of the tournament.

The stakes were high in our last game for group B as the undefeated Canberra Warriors took on a Sydney Blues side who needed the win to qualify. The game kicked off fast and intense with Moreland looking to be the hungrier side, knocking on the door of a goal from the get-go. Cosimo Russo found himself creating another goal in the tournament setting up Atay Ibrahim inside the penalty area to take the early lead. Canberra found their will and determination having a number of chances, and it was Ubeyde Cicek who broke the deadlock and equalised low and hard from range. The half ended all square at 1-1.

The games intensity continued with both sides having their chances to take the lead and it was the man inform Cosimo Russo who stole it back for the Blues. He struck off a side ball layoff powerfully to put his side ahead. Victor Brauner then got his name on the scoresheet, and questions were asked whether the ball crossed the line until the referee allowed the goal which doubled the deficit at 3-1.

Our 5th match for Group A saw the strong Melbourne lions take on the woeful Adelaide Panthers who were in desperate need of a win. Melbourne were striking early, and multiple saves from the Adelaide goalkeeper eventually lead to the ball falling to Jake Besenyi up close to take the lead. Gerardo Soto doubled the deficit from close range, but Adelaide’s James Ignatidis responded with a well-struck goal to motivate his side. Although the momentum could’ve switched, Melbourne kept up the domination eventually leading to Alison De Lima and Andre Caro tearing up the opposition defence to get a De Lima goal into an open net. Besenyi closed the half with his brace off of a clever free kick play from Caro.

Gerardo Soto opened the half with his second of the game from close-range, and it was Kevin Dos Santos who sealed the deal for Melbourne getting the sides sixth of the game after receiving a Soto pass and walking the ball into the net. Although Ignatidis got his brace from the 10-metre penalty spot, it was too little too late as his side were eliminated from Series Futsal Australia.

The game kicked off intense with West Coast’s young team firing and hungry for goals attacking relentlessly. It didn’t lead to success though, as Darwin’s key-man Jose Filho got the first of the game from close-range to the cheers of the spectators. Tyler Garner had his say though smashing home a fantastic strike off the crossbar and over the line to equalise. Filho then stole the lead back powerfully pleasing the spectators once again, but Garner was still having none of it, toe-poking it low and hard from range and hitting the back of the net. It was all level and game on at half time.

Controversy and drama persisted with players and coaching staff making their voices heard. It was Nathan Long who scored on the left flank to retake the lead. It was a game of cat and mouse though with West Coast scoring through Tyler Garner from close range for another equaliser and his hatrick. It was an immediate reply though as Hayden Kanjo struck from kick-off catching Peter Tamburrino off guard and taking the lead once again. Long then doubled the deficit by firing home a volley off of a Kanjo cross, and although they found a goal through Scott Rogan nutmegging the Wolves’ goalkeeper, it wasn’t enough as Darwin were victorious 4-5.

This game was sure to be a match of the tournament candidate and it undeniably made the case for it as both sides put on a show for the packed crowd. It was Vagner Pula against Sean Garnier and no one was predicting this one. Pula controlled the tempo of the game from the get-go as he struck over and over again at the Warriors’ goals. It didn’t take long for one of his strikes to go in though as he kept his composure in front of goal and struck hard and low to take the lead. West Coast had control but Canberra struck quick after conceding, scoring through star-man Henrique Pimenta as he absolutely terrorised the West Coast defence, making his own space and firing through Peter Tamburrinos legs to equalise. It took a few minutes but Pula found himself in front of goal once again, kept his composure and beat the goalkeeper very intelligently to take the lead back for West Coast.

Our second half kicked off and it was clear that this game was not slowing down. Both sides were playing the best futsal possible and it was Futsal Oz legend Sofiane Soufi who added to the drama by scoring a very intelligent free kick under the wall to equalise. A fantastic celebration followed the goal, but the celebrations didn’t stop there for Canberra as they took the lead through a Pimenta long shot that had nothing but power, precision and a trademark bow-and-arrow towards the crowd. The game wasn’t over yet as these Series Futsal giants chased the win but it was Scott Rogan who went on a #ridiculous run when beating his man quickly and placing his finish into the near-post bottom corner to equalise. With the minutes running down, no one knew who would qualify for the grand final, but it was West Coast who scored the winner with under two minutes to spare through a King Nando longshot from Fernando De Moraes. He managed to beat his man, none-other than Sean Garnier and struck the ball into the top right corner to qualify for the final. The scenes were incredible and were only going to get better.

Our second semi final game kicked off and it was two star-studded sides in Melbourne Lions and Sydney Blues going head to head. Sparks were flying as the intensity flared throughout the match. Melbourne Lions started off the stronger of the two, taking shot after shot and eventually getting their breakthrough from veteran Andre Caro. He struck the ball off of a side-ball lay-off in his trademark fashion, firing the ball under the crossbar and in with extreme power. Sydney woke up and began to show their spirit and determination but it was a Jason Barrientos header that acted as the dagger to the throats of the Sydney side as the deficit was doubled. The game wasn’t over though as the action continued into the second half.

The second half began with a bang as both sides went all in for the next goal. Melbourne weren’t looking to park the bus as they defended with strength and attacked with pace. Although Melbourne still looked strong, it was Sydney who scored next through an Adam Cooper shot being deflected off of Alejandro Gomez and in. The lead was shortened, but the intensity was heightened for the lions as Alisson Lima intercept Cosimo Russo’s backpass and struck nearpost to regain the two-goal lead. Alejandor Gomez would score a chipped goal next to make it 4-1, and saw celebrations erupts from teammates as it became apparent that they were making the grand final. Muhamed Temel scored a quick brace from close range, but it ultimately wasn’t enough as they were eliminated 4-3.

It was time for our Grand Final. After two long days of games for both sides, it was time to implement everything they had learned together and attempt to become Series Futsal Australia champions.

The game kicked off with a predictable big fight feel as both teams were determined to get in eachothers heads. You couldn’t pick a favourite after the first few minutes, but it was Vagner Pula who was the decider as he used great skill and technique to find himself in front goal, stay composed and tuck home a beautifully worked goal to take the lead in the grand final. Both teams were knocking on the door of the second goal of the game, with Peter Tamburrino and Aaron Yu both pulling saves right out of the top draw. It was Melbourne though who found the equaliser through Alisson Lima receiving an Gerardo Soto throughball, taking it in his stride and finishing cleverly into the top right corner. The celebrations were emphatic, but not long-lasting as West Coast responded extremely quickly through Pula getting his brace from a brilliant Scott Rogan assist allowing him to finish into an empty net. West Coast entered the second half with the advantage but certainly without comfortability.

This match was as hard to call as any we’ve seen so far with both Melbourne and West Coast putting on a show for the fans in attendance. The top quality goalkeeping performances persisted throughout the game, but it was Felipe Bley being caught off his line that allowed Rogan to fire home a wonderful chip from his own half. Teammates went wild but the game wasn’t over yet, with Melbourne still knocking on the door of a second goal. Eventually the goal would come through an Andre Caro strike that nearly broke the net. It was classic Caro as he fired home from distance  a beautiful strike that flowed just under the crossbar. It truly was game on. Melbourne enjoyed the freedom of attacking a defensive West Coast side as they were desperate to equalise. It was Jake Besenyi who added another to his tournament tally by firing well and accurate from just outside the penalty area to equalise, there were scenes at SFA as this game went into extra time.

Extra time saw two halves of pure desperate yet orthodox futsal with the two teams leaving everything on the court. Controversy struck though when referees believed that Alejandro Gomez took too long to take his side-ball kick-in, and it was off this turnover that West Coast would find their eventual winner. Big game player Fernando De Moraes gifted his side the SFA trophy after striking low into the bottom right corner from just outside the penalty area off of a Tyler Garner assist. Protests and rage filled the building, but it was too little too late for Melbourne as they eventually lost the grand final to West Coast Tigers.