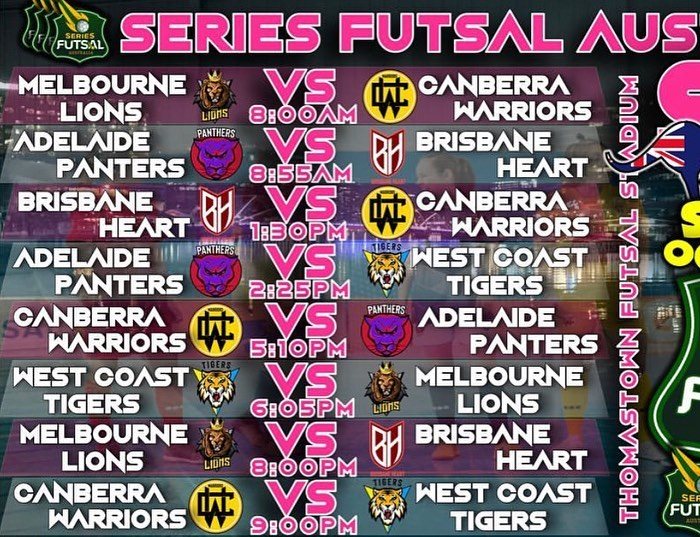 Our first match of the day saw the Melbourne Lioness take on competition favourites Canberra Amazons. Both sides looked strong but it was the Amazons that looked to be the side to win from the get-go, as Monica Fonua struck a first-half brace to enter the second-half with the advantge. Although her second goal was a well-taken close ranged finish, it was her first goal that stole the applause as she headered it backwards into the back of the net.

Our second half remained at the same tempo as before, with Melbourne struggling to break down the Amazons. It was Alex Sinclair who stretched the deficit to three with a header of her own that complimented Fonua’s in the first half. Anita Caro gave Melbourne hope with her close ranged goal but it was Lisa Fonua who shattered the hope of a resurgence from Melbourne by striking a #ridiculous shot from her own half and into the top corner of the opposition net. The match finished with Canberra looking strong at 4-1.

Our next game saw Brisbane Hearts face off against Adelaide Panthers in a match where the first half exemplified a game of cat and mouse. Jessica Au took the lead for Brisbane, but Sidney Marie Allen quickly equalised. Margot Robinne then took the lead back, but Marie Allen was having none of it as she equalised again powerfully. Robinne then got a brace of her own to steal lead again with a top-corner strike, and it was a goal-fest for Brisbane after that with Kristina Hall, Alyson Pym, Au and Ana Correia all scoring to close the half at 7-2.

Adelaide managed an early second-half goal through Marie Allen and managed to hold Brisbane to 0 goals but it ultimately wasn’t enough. Already on her hattrick, Marie Allen decided to continue the domination with another goal from distance and one from just outside the area, but that was all as the game ended at 7-5.

This match pitted two sides fresh out of victories in Brisbane Heart and Canberra Amazons in a clash that was anything but predictable. Both sides were gunning for a goal but it was Lisa Fonua’s fantastic volley from distance that allowed her side to take the early lead. Brisbane received a free kick, and after seeing the shot blocked, the rebound fell to Kristina Hall who confidently struck a volley home to equalise and close the half.

The second half kicked off with top draw performances from both teams as they looked to continue their good form throughout the day. It was Christina Fonua who broke the deadlock as she struck what looked like a shot from her defence and watched it as it went through the opposition goalkeepers hands and into the back of the net. They stole the lead back but looked to further it after Lisa Fonua got her second of the game with a well-taken finish. Jessica Au added another goal to her tournament tally with a great side-netting finish but ultimately couldn’t bring her side back into the game as they went down to the strong Amazons.

Our fourth match of the tournament pitted West Coast Tigers against Adelaide Panthers. It was the Tigers’ first match and Adelaide’s chance to get their first win in an unpredictable affair. Sidney Marie Allen continued her goalscoring form for the tournament by scoring first blood with a top corner placed finished. Her goal was complimented by Steph Galeas fantastic distanced shot that struck just under the crossbar and into the back of the net. Adelaide went into the second half on top of this one.

West Coast were hungry but Adelaide were happy to defend the early lead for the majority of the half, only conceding one goal to the tigers. The goal came through C. Fruscalzo who kept her composure when finding herself in front of goal, but it was ultimately too late to result in any comeback as her side faced defeat.

It was the undefeated Canberra Amazons taking on a hungry Adelaide Panthers side fresh out of beating West Coast Tigers. Rachel Alonso took the lead early for Canberra from close range, and it was Alex Sinclair from distance who struck to double the deficit. The half ended with Canberra in the lead but the game certainly wasn’t over yet.

Canberra smelt blood as Adelaide were struggling to keep up with the constant strikes from their opposition. It was Alonso and Cristiane Astorp’s braces that allowed the Amazons to see the game out with a comfortable lead. After some well worked goals and consistent pressure, the Amazons found themselves conceding one goal through Laila Abdullatif’s chipped strike from close range, but that was ultimately it for the Panthers.

Our next group game saw the Melbourne Lionesses take on West Coast Tigers in an unpredictable affair where both sides would seek their first victory of the tournament. At 0-0, the Lionesses’ received a penalty but saw the post shatter as Emily Coppock missed the chance to take the early lead. It was Stacey Papadopoulos who broke the deadlock as she passed the ball into an open net, and soon would finish off her brace by striking with confidence and composure in front of goal. A goal to halve the deficit for Melbourne through a Sarah Chappel goal that heard cheers and celebrations as a comeback seemed to be on the cards.

Our second half kicked off with West Coast Tigers gunning hard and strong to get the victory. The consistent pressure eventually lead to a wonderstrike from Jess Dillon, who was more than happy to increase the lead for her side. A brace of goals from Sarah Richardson meant that West Coast had run away with their first win of the tournament.

It was Melbourne and Brisbane as both teams searched for the much-needed win if they wanted to advance into the semi finals. The didn’t offer much in terms of goals, but plenty for drama as #11 went down early with a serious knee injury causing her to be stretchered off. The game was square at 0-0 until Stephanie Peluso saw her chance to strike a free kick and took it well as she struck hard and precise to take the early lead.

Our second half saw sparks from Brisbane as they continued to relentlessly attack their opposition. Margot Robinne had her say as she fired home a brace to increase the lead, and Jessica Au added another to her tally for the tournament striking well. Ana Correia scored after a fantastic set piece play to finish off her opponents, as all Melbourne could muster in the first half was one consolation goal through Evangelia Parthimos.

The match began with a bang as Christiane Astorp hammered home a free kick to open up the scoring for the ever-so strong Canberra Amazons. The lead was stretched when Alycia Eicke fired home a goal followed by loud cheers as her team believed they had been taking the win. Jess Dillon fired hard from close range to give her side hope, but an Alex Sinclair header rejected the resurgence whilst closing the half.

It was a game of cat and mouse as both teams found their shooting boots in the second half. Stacey Papadopoulos fired a rebounded goal into an open net to close the deficit, which allowed Emily Coppock to equalise for West Coast to cause mayhem. Astorp took the lead back for Canberra, but it was Dillon who equalised once again. Coppock scored to once again allow West Coast to have the lead, but a wonderfully taken run and goal from Astorp allowed the game to be all square again. Coppock fired home from extremely close range to make it 6-5 in West Coasts favour achieving her hattrick and inevitably winning the match dramatically.