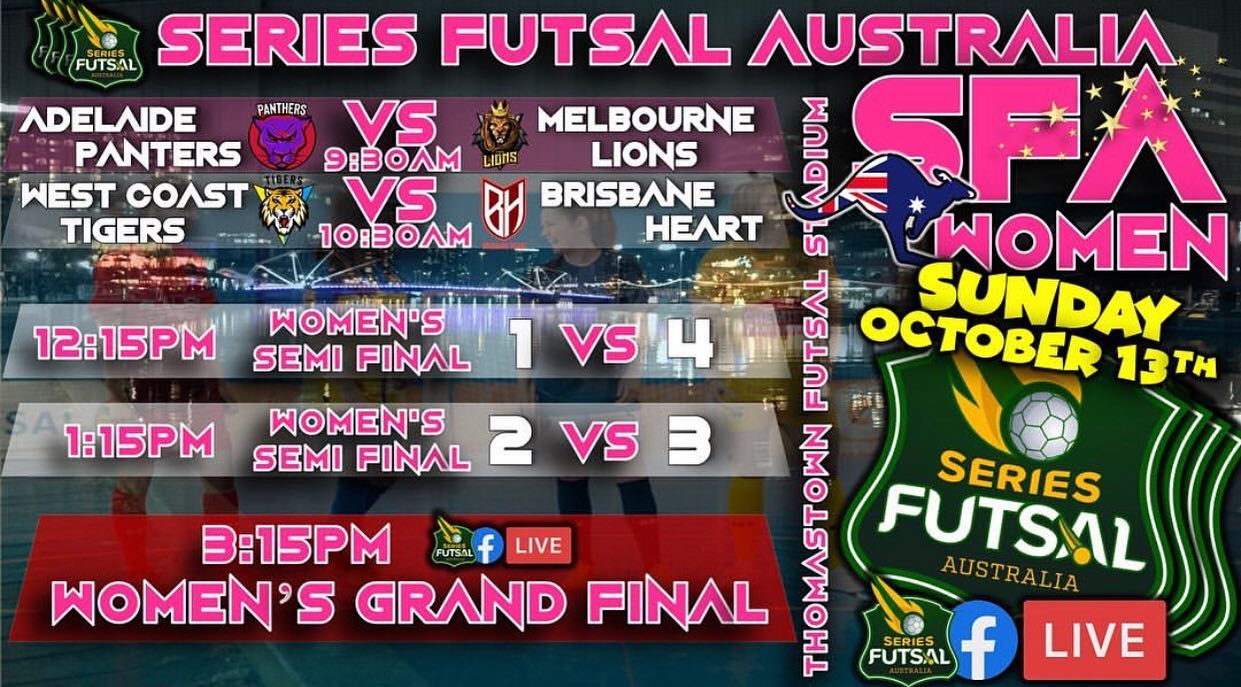 The opening game of the day saw the Adelaide Panthers face Melbourne Lions as a big win of the Lions would see them book a finals place. A tight first half saw the Panthers edge the scoring with goals from Sidney Allen, Alana Cerne & Elizabeth Eyar seeing them hold a 3-2 advantage, while a pair of goals from Bruna Silva kept the Lions in the game at the break.

The second half was just as close with little to seperate the two, until a goal from Allen sured up the result to see Adelaide book their place in the Semi Finals, while the Panthers go home without a win.

The final game of the group saw the Tigers and Heart face off, and with both sides still able to top the group, there was a lot to play for in this one. A strong start from the Heart all but secured the result early as goals from Margot Robine, Steph Peluso, Rebecca Davies & Jess Au had them in control, while a Jess Dillon strike kept the tigers in with some hope.

The Heart proved too strong though as Robinne struck twice more to complete her hat trick and ensure the Heart won by the correct amount of goals to book their place in the Semi Finals as group winners.

The first of the Semi Finals saw an in form Heart side face the sleeping giants Adelaide Panthers. Heart were in fine form coming into this one and a powerful first half saw them remain on track for the final as Jess Au, Shannon Day & Margot Robinne all netted for a three goal advantage at the break.

The second half saw Heart remain in total control as they added a further three goals registered for the Heart as Au added a second to her tally, supported by a Claudia Johns strike and an own goal to see the Heart progress to their first ever final.

The second semi final saw Canberra and West Coast go head to head once again as another epic game awaited for a place in the final. The Amazons started the stronger of the two as Alycia Elker opened the scoring with a well hit finish, before a Lisa Fonua strike was turned in by Alex Sinclair with a classy back heel to double the advantage. West Coast hit back before the break through a Claudia Fruscalzo tap in to halve the deficit, but again the Amazons went ahead with Rachel Alonso netting to a two goal half time lead.

Early in the second half the Tigers showed they were not going to give up the fight as some nice play saw Jess Dillon tap home to again pull her side within one, but the game was all over as Christiane Astorp netted to seal an emphatic win for the Amazons as they progress to the final where they will meet Brisbane Heart.

The final of the Series Futsal Australia saw the top two sides from the group stage go head to head as Brisbane Heart took on Canberra Amazons. Canberra won the pairs first meeting and got off to a similar start in this one as Lisa Fonua rocketed home from close range for the lead, before Monica Fonua finished on the turn to double her sides advantage. The Heart managed to get themselves on the board through the in form Margot Robinne to halve the deficit, but it didn’t last long as Christina Fonua struck from range to restore the two goal cushion going into the half time break.

Early in the second half a penalty went the Hearts way, which Jessiva Au stepped up and converted to pull her side within a goal, but the Amazons would net again to extend her sides advantage to two goals. A late ten meter penalty saw Jess Au’s shot saved b y Christina Fonua, only for the rebound to be smashed back in by Au to set up a grand stand finish, but they would fall just short as the Amazons claimed the championship.