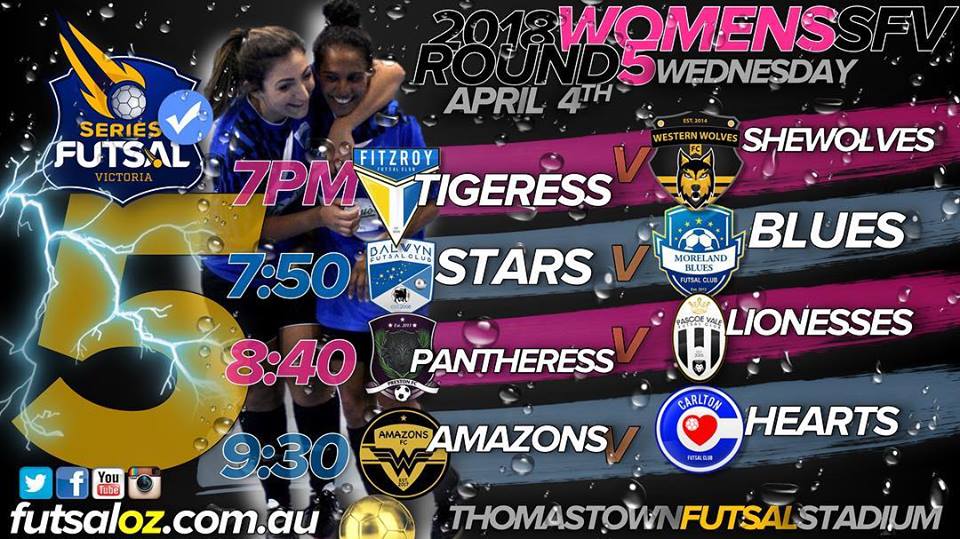 The first game of round five saw title chasers Fitzroy take on Western Wolves. In what was a must win for both sides, Fitzroy got off to the better start as Sarah Richardson converted from a free kick for the opener. The Tigers then added a further seven goals to one with Richardson completing a first half hat trick as well as Braces to Em Coppock and Ili Jakab overpowering Finley Nobbs strike to have Fitzroy leading 7-1 at the half.

The Wolves battled in the second half as they managed to pull a few back thanks to a brace from Rachel Hurlimann and a single to Jan Mustac right on the buzzer, but it would be Fitzroy’s day as they continued the scoreboard pressure, Coppock completing her hat trick while Richardson grabbed a fourth and Erin Clout bagging two for herself in a comfortable victory for Fitzroy as they begin to swing their season into gear.

Second up saw ladder leaders Moreland face the ever improving Balwyn. Coming off an 18-0 win last week Moreland looked in the mood for more goals as they put on a 7-1 first half clinic with Daniella Galluccio & Ebru Hasan both bagging braces while Sinem Celepci, Melissa Missailidis & Rebecca Saber all chimed in with a goal before Zoe Dupont’s late strike for Balwyn add some consolation to the half but Moreland were in complete control.

Next up pitted Preston looking to bounce back from last weeks massive defeat as they took on title hopefuls Pascoe Vale. It was the Lions who got off to the better start with a goal from Marcela Marques setting them on their way, before Priscilla Ribas was on hand to double the advantage. Evangelia Parthimos made it 3-0 as the game looked to be getting away from Preston. Melka Suratie came off the bench pull a goal back for the Panthers on the break, but it was short lived with Marques and Abbey Flight both netting to have Pascoe leading 5-1 at the half time break.

From the second half kick off, Pascoe would strike again thanks to a goal from Ribas making it 6-1. Some lovely work from Elizabeth Eyar ensured Preston remained in the contest at 6-2 but it wouldn’t get any better as Pascoe added a further three goals with Marques and Ribas completing hat tricks while Julie Tran got her name on the scoresheet to round out a solid win for the Lions pushing them into second for the time being.

The final game of the evening pitted Melbourne Amazons against Carlton Heart as both sides were looking to bounce back from defeats last week. Carlton started the stronger as they got the first of the evening through Stef Oddo, before returning Rebecca Davies fired home from a free kick to double the advantage. Oddo would add her second of the contest before Katie Foster tapped home to make it a 4-0 half time lead to the Heart.

Opening the second half Morgan Kirk-Eaton would tap home to get her first of the game, before she doubled her tally shortly after to make it 6-0. Bianca Lee pulled one back for the Amazons to keep them in it, but not for long with a lovely ball from Oddo finished off by Claudia Johns to make it 7-1. Lee would strike again to make it 7-2 and honourable but Carlton were in the mood and struck again through a goal of the night contender from Katie Foster making it 8-2 with her first of the night. Kirk-Eaton completed her hat trick before Foster also completed her treble as Carlton return to the winners list in style while the Amazons fall short again.