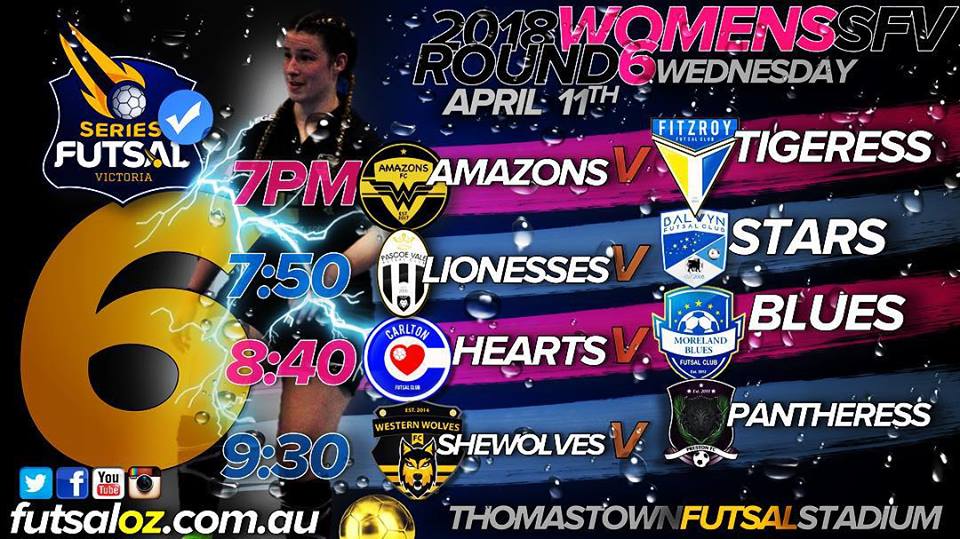 The first game of round six saw Melbourne Amazons face Fitzroy for the first time ever. It did not take long for the deadlock to be broken as Em Coppock found the net for the opener. Coppock then turned provider for the next two with Rebecca Berry the beneficiary. Four more goals would follow in the half with Berry completing her hat trick while Coppock grabbed a brace and Ebru Efe and Erin Clout found the net as Fitzroy took a commanding 7-0 lead into the half time break.

From the opening kick off in the second half Fitzroy were on the board again through an own goal, before Berry grabbed two more of her own to make it five for herself. Coppock completed her hat trick with a header before Erin Clout finished one on one to have Fitzroy in complete control leading 12-0. Fitzroy would add a further five to their tally with Berry finishing with a game high seven goals, while Clout hit four of her own. Amazons pulled one back as a consolation through Breanna Cain but it was not more than that as the Tigers ran out convincing winners.

Second up saw Pascoe Vale take on Balwyn in what was a tricky clash for the lions. Pascoe were on top from the get go though as they piled on six first half goals to none, Marcela Marques the standout with three, while Abbey Flight grabbed two of her own and Evangelia Parthimos got her name on the scoresheet as Pascoe were in complete control.

The second half was better from Balwyn as they kept the lions scoreless for a long period of time, But they could not keep Pascoe out, Marques grabbing her fourth of the game, before Flight completed her hat trick moments later. Marques added another making it a five star performance from Pascoce’s main player, while Julie Tran then chimed in with a goal. Flight would add one more late on to seal a comprehensive victory for the Lions.

Next up saw a game of the night contender between Carlton and Moreland. Only three points separated the pair and it was an important three points up for grabs. Carlton struck first when a long throw was unfortunately turned in for an own goal from Moreland stopper Paige Daly for the opener. Moreland would draw level soon after when Daniella Galluccio found the net to have honours even at the break.

An early blunder in the second half from Carlton stopper Sam Dowling gifted Rebecca Saber the chance to give her side the lead and she made no mistake as she fired it home low. With the time running out Carlton drew level with Rebecca Davies firing home from range to send the game into a penalty shootout.

Carlton took the honours of the shootout scoring 2/3 penalties to take home a critical three points handing Moreland their first defeat of the season.

The final game of the night pitted Western Wolves against Preston as both sides were looking to claw away from the bottom of the table. It was a tight opening to the contest the pair trading blows going into the half time break locked at 2-2, A double for Preston’s Armina Sherifi cancelling out goals from Finley Nobbs and Rachel Hurlimann.

The second half was another tight and hard fought contest with neither side wanting to drop points and bodies flying in everywhere. It would be the Wolves who raced out to a 5-3 lead with Nobbs in the middle of it all scoring and assisting another looking like it would be too much for Preston. The Panthers pulled one back through Lazarevski late on but would fall just short as the Wolves took home their first win of the season.