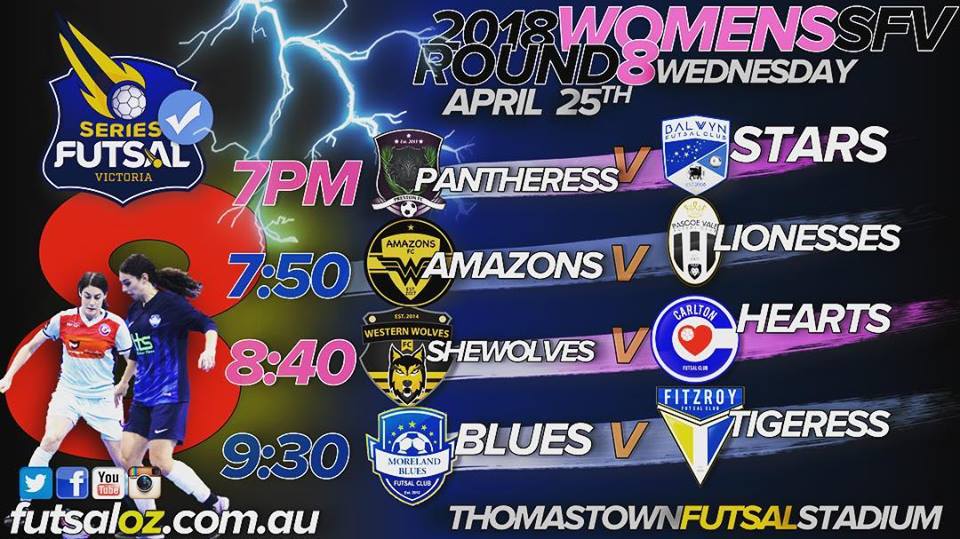 The first game of round eight saw a repeat of the round one fixtures with all sides having faced each other once so far. Preston were looking to get back on the winners list and got off to a flying start when in form Armina Sherifi drew first blood. Balwyn hit back as Lynette West fired one home. With the game in the balance it was unfortunate for Balwyn which saw them concede an own goal to gift Preston the lead again. Malka Suratie then opened up a two goal gap, giving the side some breathing space going into the half time break.

Early in the second half Balwyn set about overturning the deficit and pulled one back through a long range effort from Rachel West. Soon after they were on level terms as Angela West completed the hat trick of West goal scorers with Balwyn looking for all three points. However Preston re-grouped and found a late winner with Rana Atme the scorer sealing an important victory for Balwyn.

Second up saw Melbourne Amazons looking to turn their form around against a Pascoe Vale side with title ambitions. A tight first half saw Amazons make it difficult for the Lions to find the net, though their resistance was broken when Anita Odd marked her return with a goal to have Pascoe ahead 1-0 at the half tie break.

Pascoe started the second half on the front foot and added two early goals through Marcela Marques & Evangelia Parthimos almost had the game beyond doubt. Marques got her second of the game to add some polish to the result, before Liesl Woods rounded off a good performance and important three points for the lions.

Next up saw Western Wolves face top of the table Carlton Heart. Carlton started the better when a long throw was turned in for an own goal from Rachel Hurlimann. It was soon two when Jess Byrne tapped home at the back post and Byrne was on hand again as she finished from a tight angle to have Carlton three goals to the good. Wolves would pull a goal back through Jan Mustac to remain in the contest, but the lead was extended shortly after as Morgan Kirk-Eaton found the net to restore the three goal cushion. Before the half time break, Sarah Chamma netted to have her side within two goals once again trailing 4-2 at the break.

Carlton would add to their tally early in the second half with a good lay off from Byrne seeing Kirk-Eaton’s first time strike find the net. The Wolves stemmed the flow of goals until the dying minutes when Katie Foster found the net for the first time in the contest, before doubling her tally shortly after to seal an emphatic victory for the Heart to ensure they remain top of the table.

The final clash of the night looked to be the game of the evening on paper as fourth placed Moreland took on second placed Fitzroy. A crucial game in the balance of the title, it was Fitzroy who struck from virtually the first kick off as Sarah Richardson saw her first effort saved, before finding the net at the second time of asking. Chances went the way of both sides but it was Richardson who found the net again, this time from inside her own half time give Fitzroy a handy 2-0 lead.

Early in the second half a mistake at the back cost Moreland another as this time Ebru Efe put the ball away with Moreland seeming to have no answers. Moreland did find the net shortly after as a dinked ball over the defence from Danica Petreska saw Ebru Hasan tuck it home to keep Moreland in the contest. A mistake at the back from Fitzroy allowed Melissa Missailidis in to finish and have Moreland within a goal. With under a minute on the clock Moreland drew level as a scramble in the area fell to Missailidis who put it away to all but send the game to penalties. Fitzroy however would escape defeat as Efe’s initial shot was saved which fell to Romy Heasly who put away what turned out the match winner in a very even and entertaining game of Futsal.