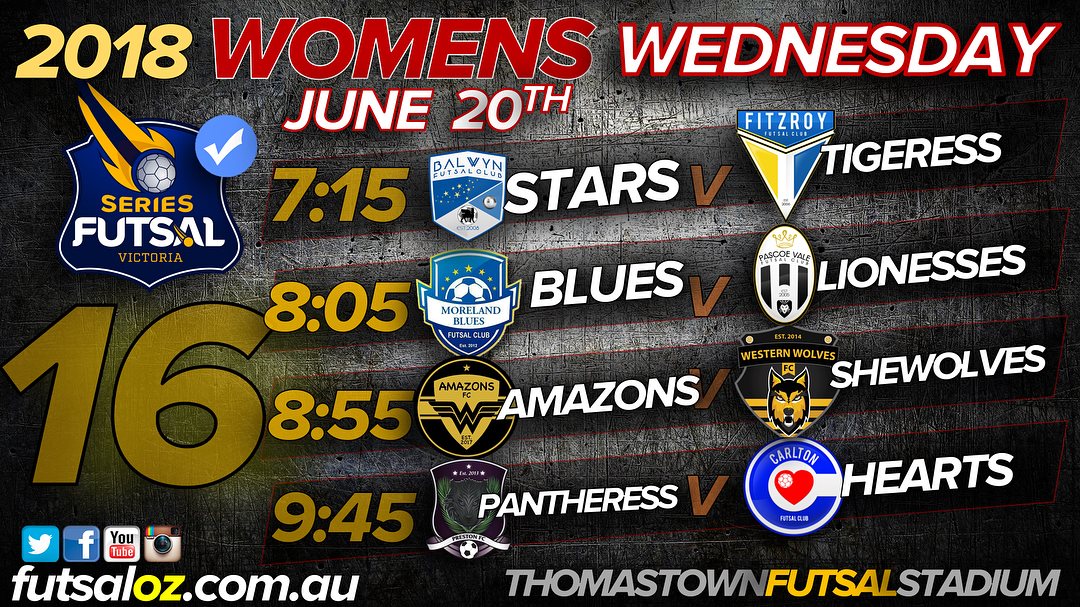 The first clash of round sixteen saw ladder leaders Fitzroy take on bottom of the table Balwyn as they continued to push for the title. Early on Sarah Richardson gave the Tigers the lead but it was quickly clawed back by an Angela West strike restoring parody. Erin Clout put Fitzroy ahead again, scoring from a corner set piece, before Em Coppock got her first of the game to give her side a two goal cushion. Some fantastic play from Fitzroy saw Rebecca Berry tap home at the back post and open up a 4-1 lead. A fantastic strike from range saw Rachel West continue her good form and cut the deficit to two once again. Coppock would find the net again to extend the Fitzroy lead, but Balwyn were not going away as Angela West got her second of the contest to remain in it. First gamer Eva Jan got on the scoresheet for Fitzroy, before Coppock completed her hat trick to have the Tigers leading 7-3 at the break.

While Balwyn continued to battle, Fitzroy continued to pull away as the game dragged on. A further four second half goals from Coppock took her tally to seven for the game, before whilst a brace from Clout completed her hat trick and Richardson added another to make it a brace for herself in a convincing half for Fitzroy. Balwyn fought until the end, Angela West completing her hat trick in a standout performance, with Corina Jayasekera getting a goal for herself but they would only be consolations as Fitzroy continued to march towards a maiden title.

Second up was a game of the night contender as third placed Moreland took on fourth placed Pascoe Vale. A big game for both with SFA on the line it was the Lions who struck first with Leisl Woods finishing on the half volley for the opener. In unfortunate circumstances, Woods then turned the ball into her own goal to have the scores level at the half time break.

Moreland took the lead early in the second half through Jacinta Da Cruz and never looked back, Daniella Galluccio got her name on the scoresheet to open up a two goal buffer, before Galluccio got on the end of a long ball to head home what looked to be the sealer. Galluccio then had a hat trick as a poorly set up wall was split and Moreland took home all three points for the Blues.

Next up saw another interesting clash on the card as Melbourne Amazons faced Western Wolves. It was an entertaining start to the game as the Amazons faced Western Wolves. In a tight star to the half it took some time for the first goal to come with plenty of chances for both sides, but it was Bianca Lee who continued her scoring form as she converted the first. Lee would then double her and her sides tally as she was in fine form and had no intention of stopping. The Wolves pulled one back through Camilla Palmer to go into the half time break with a real chance at overturning the deficit.

Early in the second half Amazons extended their advantage through a stunning long range strike from Ashleigh Kelly. Camilla Palmer finally finished a chance for the Wolves who had blown a heap of chances throughout but remained in the contest. Wai Kwan-Chislett would extend the deficit to two goals once again as they continued to hold their lead. Some great play from Palmer set up Diarna Cartwright to finish at the back post to again have her side within a goal. As was the trend of the game though Lee would complete her hat trick to give her side a two goal lead for the fourth time on the night. Palmer and the Wolves would not go away and clawed another back completing her hat trick to get it back to 5-4, and finally the Wolves were level as Finlay Nobbs finished on the goal line to level proceedings at 5-5. With the scores tied, Palmer would clear a sure goal off the line to save the Wolves and it proved pivotal as Nobbs would then turn out to be the match winner adding another late on to seal a massive three points for the Wolves as they cement fifth place.

The final clash of the evening saw Preston face title hopefuls Carlton Heart. It was Preston who drew first blood as they opened the scoring through Leia Cartanos giving Preston a dream start. Carlton answered back with interest as they levelled proceedings through a Rebecca Davies strike, before Katie Foster put the Heart ahead at the break with a slender 2-1 lead.

Carlton clicked into gear in the second half as they dominated the contest piling on six goals to one, Nicole Ritchie finishing with a second half hat trick, whilst Davies added another to complete her brace, and Jess Byrne & Claudia Johns both netted to give the Heart a big lead. Cartanos would strike a lovely free kick home but it would be no more than a consolation as the Heart keep their title hopes alive.