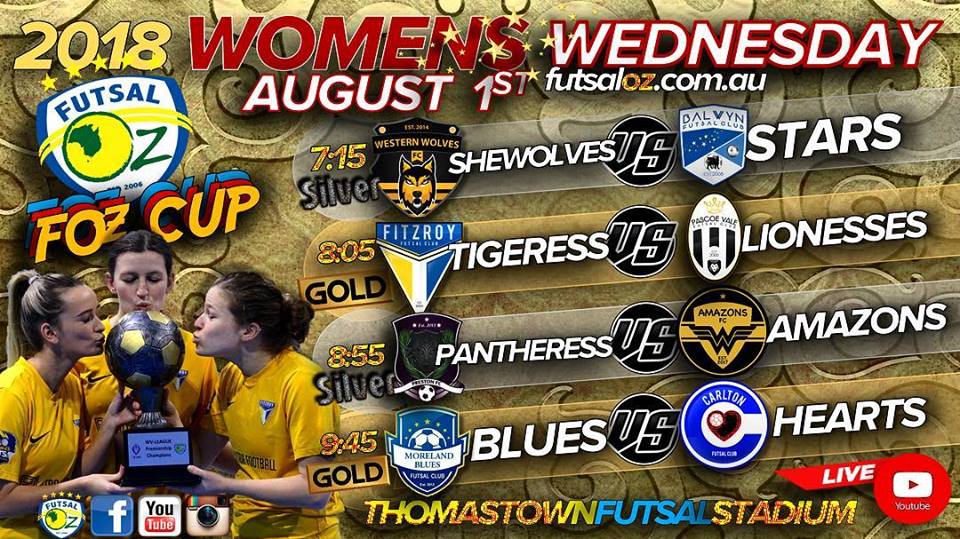 Semi finals under way. Western wolves get an early lead against Balwyn. Scoring the opening goals five minutes into the first half. Pressure on Balwyn to find that space forward and shoot. Wolves defence holds up well with Balwyn’s attacks.

Balwyn eventually able to find that equalising goal. Western Wolves give away a free kick but Balwyn not able to capitalise wasted shot. With two minutes remaining on the clock Western wolves able to score again to give them that one goal lead going into half time. 2-1 Western wolves up at half time.

Western wolves with the counter attack level out the game again and score their third. Goal for goal match with neither side able to get that upper hand advantage on their opponent. Both teams really digging deep. Balwyn able to get a one goal lead after scoring with 13 minutes remaining in the game.

Western wolves found themselves in a two on one situation with the Balwyn keeper struggling to defend both players. Wolves find their fourth goal to level out the game for the fourth time. With five minutes remaining its anybodies game.

With three minutes remaining Camilla Palmer able to scored her third goal for the western wolves to give them their fifth goal. Western Wolves able to get the win.

Fitzroy able to start the game the way they ended the season with a goal. Putting the pressure on Pascoe Vale. Pascoe vale needed to respond and they did. going on to score their first goal and levelling out the game. With the ball constantly being turned over both teams making silly errors when going forward.

Both keepers kept busy with the Pascoe Vale keeper blocking a shot on goal and feeling the pain as it hit her hard in the face. With 30 seconds remaining in the half Fitzroy able to score their second goal giving them a one goal lead at half time.

Pascoe Vale with work to do in the second half to equalise the game and find another goal to give themselves a chance of winning. Fitzroy wanted to extend that lead and that they did. With 14 minutes remaining in the half they were able to find their third goal. Really  putting the pressure on Pascoe Vale.

Fitzroy really pushing hard and communication is playing a big part in the way they go forward. Pascoe Vale putting up a fight playing a good game, struggle to find the back of the net. But their fight was out done by Fitzroy’s finish and class in the game.

Both teams came into the game determined to get the first goal, to put the pressure on early. Melbourne amazon did that exactly. Scoring three goals in the first 10 minutes of the game. Really putting the pressure on Preston defensive plan and structure and keeper.

The game majority played in Prestons defensive end really struggling when going forward. They have had as few chances on the counter attack but cant find the back of the net. Amazons really putting the pressure on and scoring another two goals in the first half. Really making it hard for Preston to come back from.

Preston were award a free kick in front of goal due to a handball call. Shot on goal and were able to convert, getting their first goal for the game.

Second half under way and amazon put there pressure on early. Going on to score two quick goals in the second half. Amazons again able to continue to find the back of the net, scoring their eighth goal for the match. That goal shocked everyone how it somehow went past the keeper for a goal.

Cherrl Rydon going on to score 5 goals for Melbourne Amazon, She really stood up and put her stamp on the game when amazons went forward. Going on to score her sixth goal in the last minute of the game.

Carlton able to start their final series in some good form. Scoring two quick goals early in the first half. Really putting the pressure on Moreland defence early. Moreland needed to stand up and got a quick reply and they did going on to score their first goal for the game.

Pressure in the game heating up from both sides and all players start to feel it, frustration levels start to rise. As both coaches and players start to get into the game. With two minutes to half time Moreland able to find their second goal for the game to level out the game. 2-2 at half time.

Second half under way and it is anyone’s game. With both side continuing to press up and have shots on goal. Moreland went on to score their third goal of the match. Giving them a one goal lead with 13 minutes remaining in the half. One minute later Carlton able to score to level out the game. Goal celebrations boil over with some heated words between opposing players getting the better of both teams.

Moreland not giving up continue to play the way they want. Having mutable shots on goal but struggling to find the back of the net. Moreland able to regain the lead by scoring again with eight minutes to go in the game. With two minutes in the gam remaining Carlton go on to score to level out the game.

Play resumes in the first five minutes of extra time, penalty given to Moreland due to Carlton’s five fouls. Shot missed game still at 4-4. First five minute half, done onto the second. Hopefully a team can get a goal and score the winning goal.

Second half under way and again Carlton gives away foul which turns into a penalty because of the five rule foul. Rebecca Saber takes the penalty and gets the goal. To give them the lead, two minutes later same situation and Carlton frustrated with the lost and Moreland proud of their efforts.