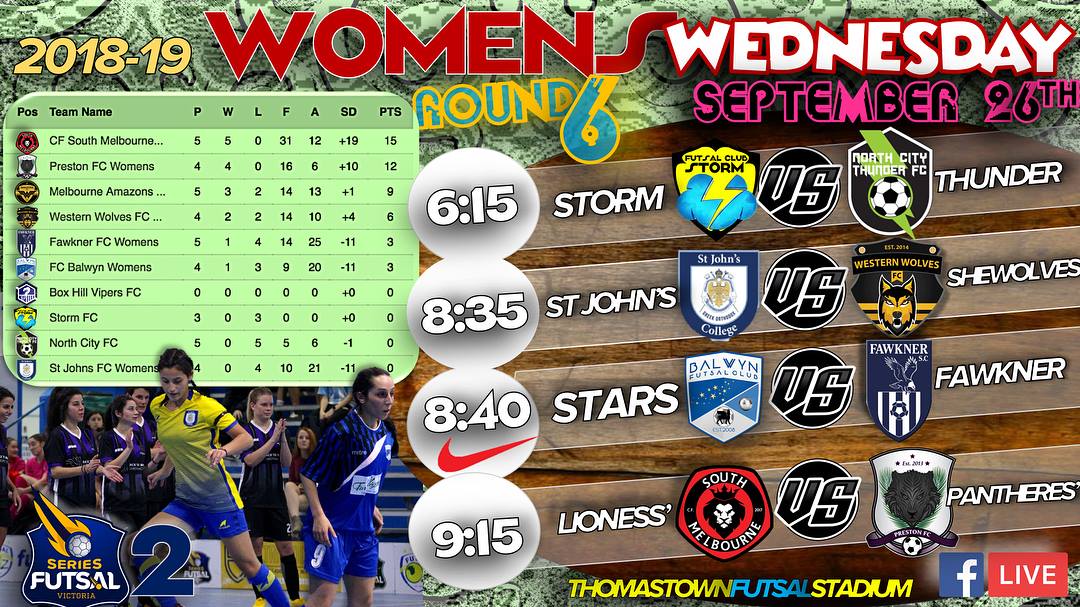 Our first game of the round saw two new sides go head to head with Storm FC taking on North City. With both sides looking for their first win in the league. In a tight first half neither side created a heap of chances with the only strike of the half coming from Paula Reyes who continued her goal scoring form from last week to give her side a slender lead at the half time break.

City came out of the break and doubled their advantage when Eleanor Horton found the net, before Michelle Vidanoski found some space and toe poked home from around ten meters for a commanding 3-0 lead. Storm stemmed the flow and pulled a goal back through Jessy Nguyen, and some lovely play soon after saw Amar Ayache finish her one on one chance to have her side within a goal. Paula Reyes found the net once again to steady the ship, before Reyes struck once again late on to seal a tough win for North City and their first three points in Series Futsal Victoria.

Next up saw a young St Johns side looking for their first win, take on Western Wolves. The Wolves got the first goal of the game through some nice build up play which saw Jan Mustac strike to give the Wolves the lead. Dani De Matos got her first goal for the Wolves to double the advantage. Finnie Nobbs made it three just before the break as the Wolves were threatening to blow their opponents away leading 3-0 at the break.

St Johns defended much tighter in the second half and limited their opponents to just one goal, which was another well worked move from the Wolves which saw De Matos tap home at the back post sealing a comfortable victory as the Wolves make it two wins on the trot.

Balwyn and Fawkner have played out a thriller with the game finishing 4-4 after normal time, Juliette Browne was fantastic for the Balwyn side as she bagged a brace, which was aided by Sarah Chamma & Kitty Master. While for Fawkner, Allana Cerne had a standout performance also bagging a brace of her own, while Laila Abdullatif continued her scoring form getting a goal of her own and Aaliyah Elrafei also found the net in a thrilling end to end affair which we could not find a winner in and need a penalty shootout to decide it, which both these teams experienced last week.

Our final game of the evening was the match of the round as the top two sides in the competition locked horns with South Melbourne facing Preston. Both were undefeated and the winner would gain some breathing space at the top. A strong start from South Melbourne saw them open up a 3-1 lead at the break thanks to goals from Natalie Italiano, Angela West & Wai Kwan Chislett all finding the back of the net, while Tayla Halabi got the goal for Preston to keep them in the contest.

Preston set about overturning the deficit in the second half and had some success as they pulled a goal back through Jess Vecchio who finished with a toe poke from distance to have her side within one, and when Armina Sherifi snuck a ball in at the near post and Preston were level and had victory in their sights. However with the game heading to penalties, arguably the player of the season so far Italiano hit a rocket from distance into the top corner to snatch all three points in amazing fashion as South remain undefeated.