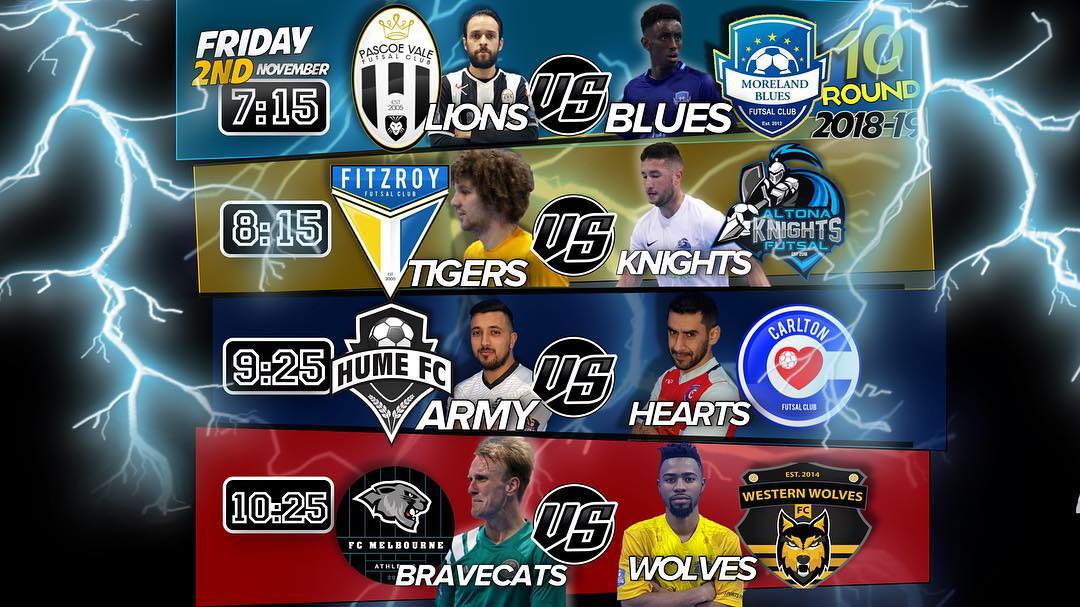 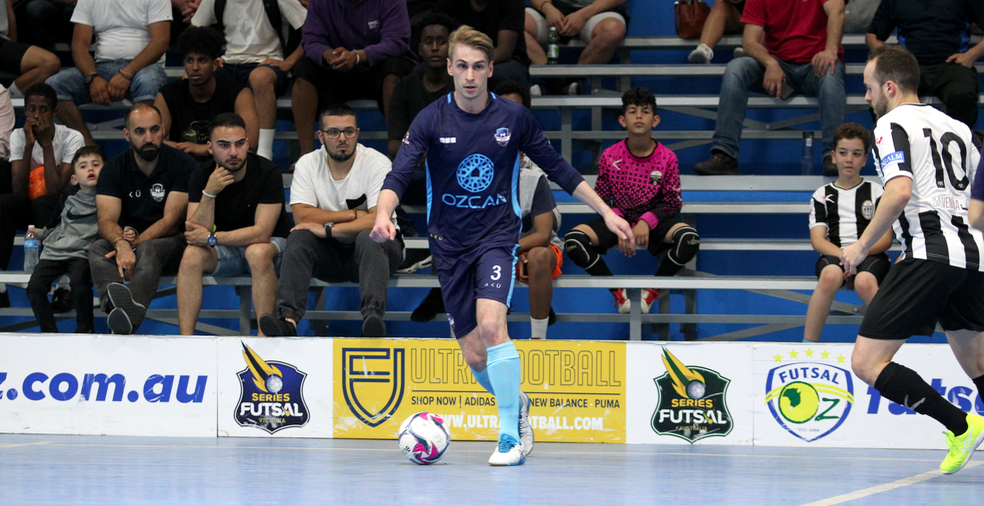 Our first game of an action packed round ten of Series Futsal Victoria saw table toppers Pascoe Vale take on title chasers Moreland. In a must win for both sides, Moreland got off to a better start as Josh Allen scored a stunning chip from a tight angle to open the scoring. Pascoe hit back immediately after as a lovely turn from Lucas Vaz was tapped in by Mauricio Novak at the back post to level proceedings. Soon after Pascoe were ahead as Joao Da Silva cut inside and hit the top corner as good as you can to ensure Pascoe would lead going into the break.

Moreland came out of the blocks rejuvenated in the second half and pulled level as Atay Ibrahim found the top corner to level the game at two, though the lead didn’t last long as an unfortunate deflection off Abdirahman Ahmed found its way in for an own goal to restore the Pascoe Vale advantage. Moreland were not going away though and a stunning effort from Adam Cooper on his left foot hit the post and went in to level the game at three as players and coaches were on edge. Pascoe Vale were determined to take the points though and some great work from Da Silva saw him beat his man and roof an effort to put his side ahead 4-3. Moreland looked hungry to take the game as well and a long range effort from Cooper would find the net to draw Moreland level for a third time, and when awarded a late ten meter penalty, Adam Cooper would keep his nerve, stepping up and converting off the post and in to seal a famous Moreland win. 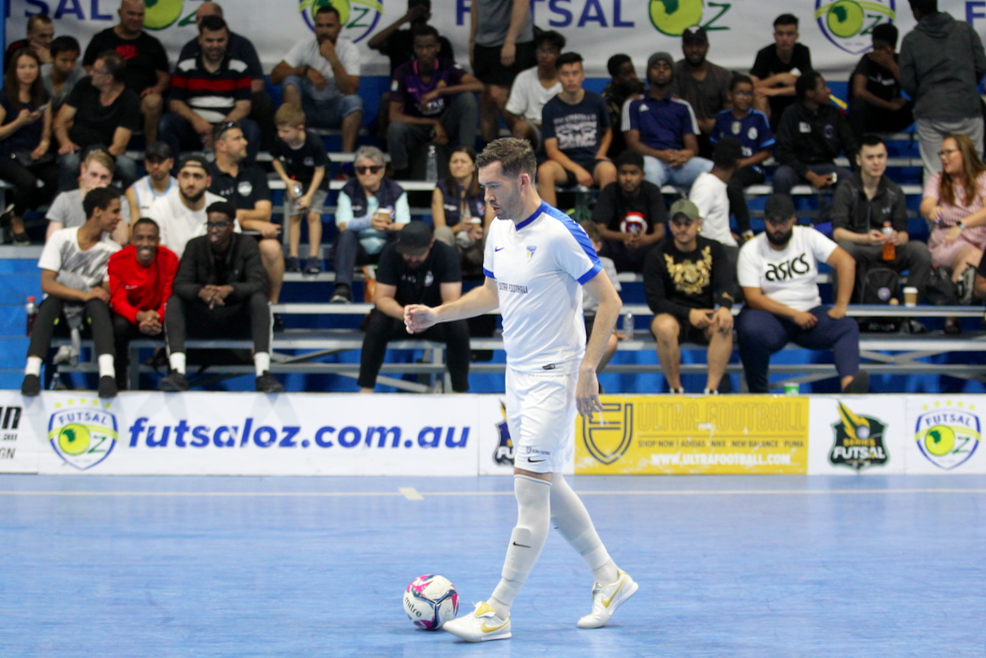 Next up saw Fitzroy coming off two straight defeats take on relegation threatened Altona Knights. With every game crucial at this stage of the season, Fitzroy got off to a good start as Scott Rogan found Fernando De Moraes at the back post who converted to give Fitzroy the lead. A mix up between the Fitzroy players saw a turnover and Jayden Merceica didn’t need too much room as he toe poked into the top corner to bring the Knights level. Merceica had his second of the game as he turned on his defender and picked out the top corner to give the Knights a handy 2-1 lead at the half time break.

Fitzroy would pull themselves level early in the second half as Cosimo Russo found the net, but from the resulting kick off Merceica completed his hat trick as he was running riot on the Fitzroy defence. A well hit free kick from De Moraes brought Fitzroy level again, and with the game heading to penalties a well worked move saw Corey Sewell lash home from the top of the area to put Fitzroy ahead. Altona attempted to play the fifth man but it backfired with Scott Rogan sealing a come from behind Fitzroy win. 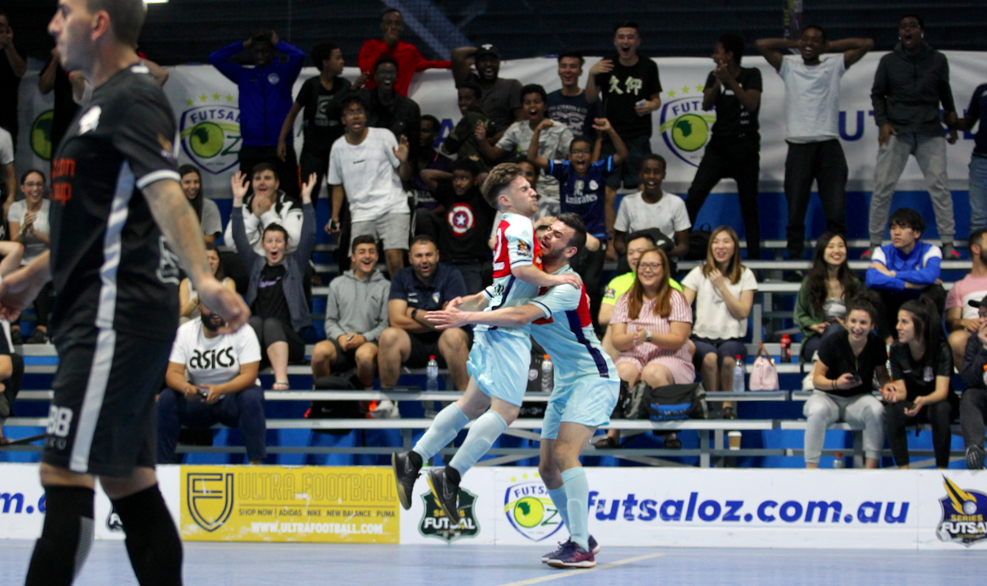 Next up saw a Hume side on the rise take on three time Champions Carlton Heart who knew a victory would take them clear top of the table. Hume have been a tough contest for Carlton in recent times and it looked the same story here today as Muhammed Temel converted a free kick early on to give the army the lead. A side ball late in the half saw Nejdett Sahin hit a rocket over Fodi Karatzas head to give Hume a 2-0 lead going into the half time break.

Carlton rallied in the second half and managed to pull a goal back through Arturo Garzon who slid in at the back post to halve the deficit. Into the final ten minutes and Carlton were given a controversial penalty which Chaaban Rajab stepped up and converted to bring Carlton level. In the final minutes of the clash, the Heart would find a winner through a long ball which Rico Hauser turned in to send the crowd wild and send the Heart back to the top of the league.

Our final game of the night was a big one in the course of the relegation battle as Melbourne Athletic took on Western Wolves. Early on it was Athletic who drew first blood as Ed Evans finished at the back post to give his side the lead. The Wolves hit back as Elvis Kamsoba cut inside and finished to restore parody. Atheltic had a golden chance to go ahead again but Ben Grillo missed the open goal and Wolves made them pay as Chris Mutsigna found the net to give his side the lead for the first time. Melvin Becket then roofed an effort from close range for a two goal advantage to take into the half time break.

Wolves went further ahead in the second half as a free kick deflected in off Lokmen Ramadan to make it 4-1 as the Wolves looked set for a big win. Melbourne hit back through Ben Grillo who turned his defender and finished to keep his side in the contest, and they were one goal closer when Simone Pelletti blasted an effort which found the net from a free kick to get them back within a goal. Becket then restored the two goal cushion with a lovely chip over George Paschalidis to make it 5-3, before Haidar Noor got himself a late goal to ensure the Wolves took a crucial win which lifts them off the bottom of the table. 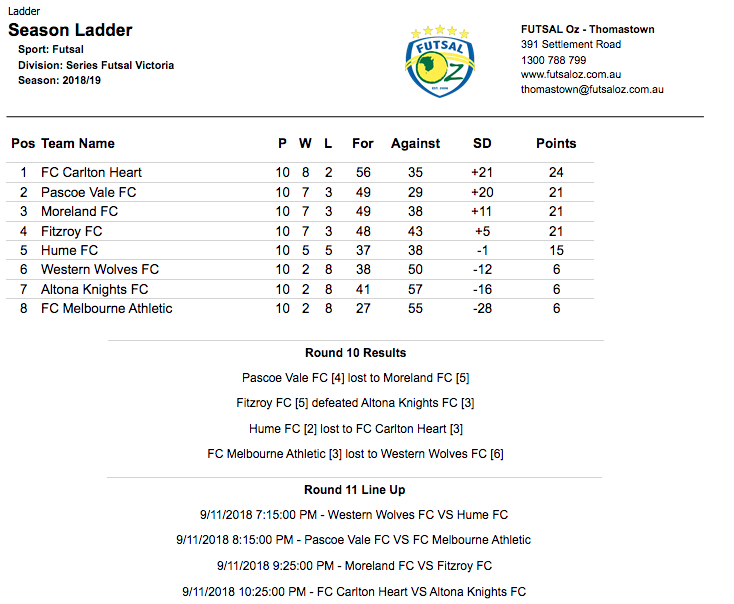