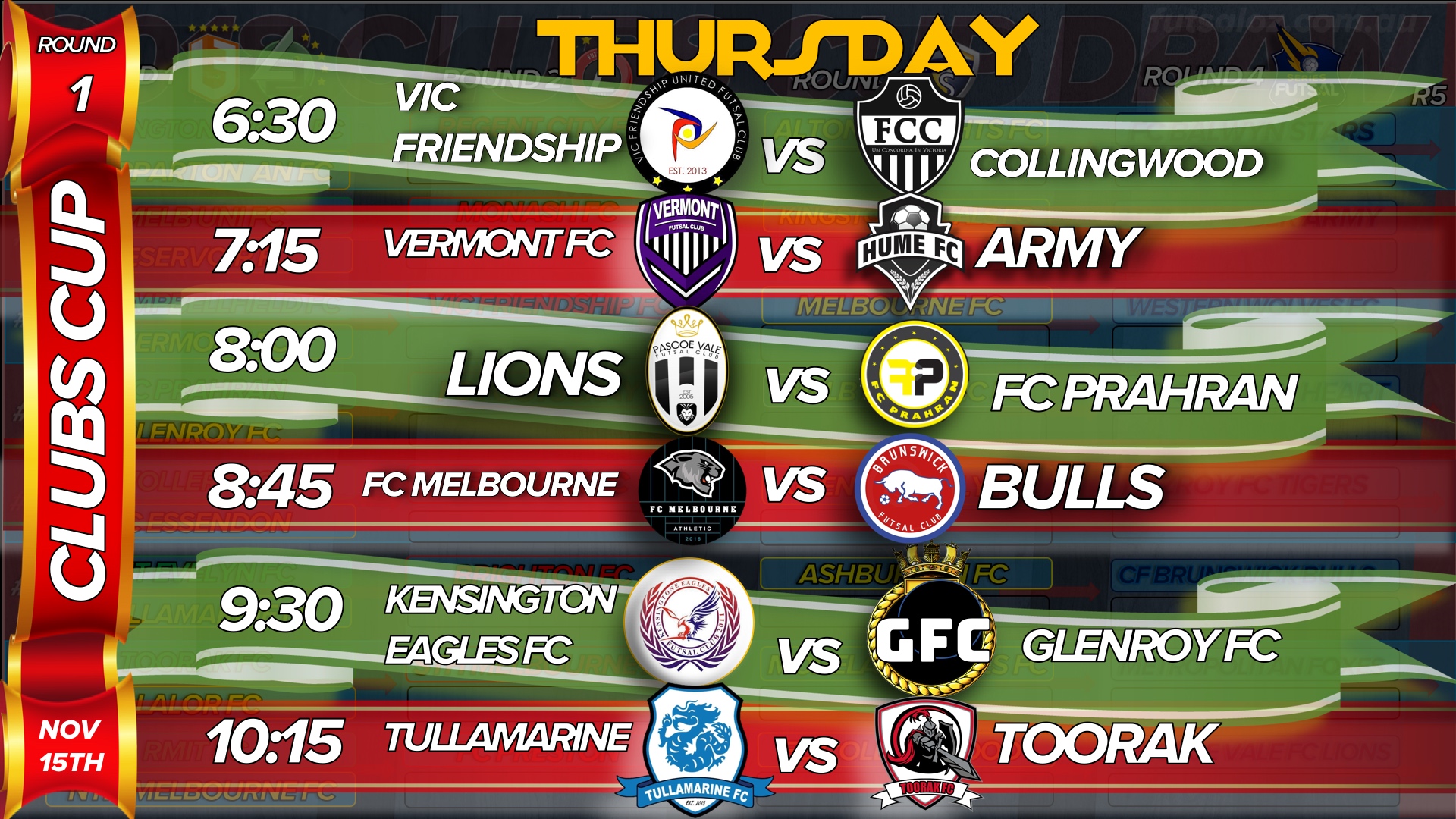 to progress to the next round and Tullamarine got the dream start when Vu Pham opened the scoring midway through the first half. Pham would then double his and Tulla’s score as they went into the break with a handy two goal advantage.

Tullamarine were continuing their dominance on the game and went three up when Jude Kattan beat his man and finished his chance to all but end the game. A g
oalkeeping error gifted Kattan his second of the game, before Kattan turned provider finding Chris Nguyen at the back post to extend the lead, Pin ty would pull a goal back for Toorak to ensure they wouldn’t go home empty handed, but Jason Nguyen would tap home late on and seal Tullamarine a safe passage to the second round where they will meet Kensington Eagles FC

Next up we saw Kensington Eagles of State League Two face fellow League Two side Glenroy. Both sides would have fancied their chances of progressing to the next round. A hotly contested first half saw the Eagles edge the encounter as they built a 3-1 lead at the break with goals to Sajad Roudbar, Hooman Shekari & Morteza Sadeghi had them ahead with Emran Mousani the only scorer for Glenroy.

Glenroy came out on the front foot in the second half and saw chance after chance go begging as it was becoming more and more unlikely that they would get back into the game despite their dominance and chances on goal. Glenroy finally broke the Kensington resistance as a fantastic bit of passing saw Farshid Balauri tap home at the back post to set up a grand stand finish. With just twenty seconds remaining Kensington conceded a foul inside the area handing Glenroy the chance to send the game to extra time from the close range penalty mark. However the Glenroy celebrations were cut short as Alireza capped a fantastic game by saving the penalty after the final whistle to send Kensington through to the second round where they will face the winner of Tullamarine Futsal Club & Toorak Futsal Club

Next up saw a game with a bit of feeling to it as Series Futsal Victoria side Melbourne Athletic faced State League Championship side Brunswick, a rematch of the promotion playoff which saw Melbourne promoted and Brunswick relegated just three months ago. In a rather dull first half neither side managed to find the back of the net though the few chances that were created fell to Brunswick who came closest to opening the scoring, but we were level at the break.

Brunswick would eventually open the scoring as a shot from Michael Marusic was deflected in by Michele Salvi to give the Bulls the lead. Brunswick had their chances to double the advantage but Athletic would pull themselves level when Justin Phengrasmy held off his defender and finished on the run to level proceedings at one. Brunswick managed to restore their advantage as a well placed ball from Salvi put Clint Mogoai one on one with Alonso and the experienced Brunswick man made no mistake as he slotted it into the bottom corner for a 2-1 lead. The Bravecats would push hard for an equaliser that never came as they see themselves as the first Series Futsal Victoria side eliminated from the competition while Brunswick book their ticket in the second round where they’ll meet Pascoe Vale Futsal Club of Series Futsal Victoria.

Next up saw Series Futsal Victoria side Pascoe Vale face State League One outfit Prahran in what was expected to be a comfortable victory for the ten time SFV champions. It didn’t take long for the Lions to open their tally as Joao Da Silva toe poked home from half way to open the scoring. Gerardo Soto would then convert from a tight angle to double the advantage, before Alisson Lima Da Rossa chimed in with a goal to have Pascoe in with a commanding 3-0 lead early. Prahran pulled a goal back through new signing Mansour Alanazi who fired home a free kick, and moments later a good finish from Peter Iliopoulos had Prahran back within a goal as they fancied themselves a chance. Andre Caro climbed off the bench and fired home with a neat volley to restore the two goal advantage. Da Silva then beat his man and fired home on his left foot as Pascoe were again building an advantage. With a minute remaining in the half Caro tapped home to have the Lions leading by four goals at the break.

The second half kicked off with Prahran finding their third goal of the contest with Erick Vasquez finding the net as they still believed they could overhaul the deficit. Da Silva then tapped home to complete his hat trick to all but kill off the tie but it became a little more interesting as Mauricio Novak was given a second yellow card reducing Pascoe to four players for two minutes. Pascoe weathered that storm, but conceded shortly after as Stephen Donoghue tapped home to have his side with three again. Andre Caro again killed off any chance of a comeback as he picked out the top corner for his hat trick and restored the four goal advantage. Vasquez got his second of the contest as Prahran hung in the game, but a late goal to Alisson Lima Da Rossa sealed a comfortable victory for Pascoe Vale which see’s them progress to the second round where they will face the winner of FC Melbourne Athletic & Brunswick Futsal Club.

Next up saw State League Two ladder leaders Vermont face Series Futsal Victoria outfit Hume. In what was expected to be a routine Hume victory they opened the scoring early through Hakan Bayrakli, before a Zois Galanopoulos strike gave Hume a two goal cushion. Steven Gusevski got his first goal of the night to make it a three goal lead for Hume, and when Luqman Samuri rounded up Ray Ngo and scored it had Hume ahead 4-0 at the half time break.

Hume were dominating the possession and early on in the second half added to their tally as Muhammed Temel found the net after a lovely piece of skill. Temel then found the net again with a low hit effort from range to make it six as Vermont were in danger of conceding a high number of goals. Bayrakli got himself a second of the game to make it 7-0 as Hume had wrapped up the points and put their stars on ice knowing they had an important fixture tomorrow evening. Vermont would get a late consolation goal to ensure they did not go home empty handed with Joe Lang finding the net, but it was too little too late as Hume progress to round two where they will face VIC Friendship Futsal CLUB

Our opening game of the 2018/19 Clubs Cup saw two State League Championship sides go head to head as Vic Friendship did battle with Collingwood. Both sides are familiar with each other playing the same competition, and despite being lower on the table Friendship opened the scoring through a Hai Phan rocket after a positive opening to the game. Despite a depleted squad Collingwood looked determined to progress and captain Cameron Holmes would strike to pull his side back level. Friendship regained the lead when Kevin Lam found the net, before Lam converted a classy chip to have his side leading 3-1 at the half time break.

Collingwood would look to mount a second half fightback but fell further behind when Hai Phan completed his brace and Kevin Lam finished off his hat trick for a commanding 5-1 lead. Collingwood pulled a goal back through Edgar Daly struck on his left foot to hold hopes of a comeback for the Woods. It was all over soon after though as Hai Phan completed his hat trick to kill off any chance of a comeback, before two late strikes from Hsa Blu Htoo Ko sealed a comfortable victory for Friendship as they progress to the second round where they will face the winner of Hume Futsal Club & Vermont CYSM Futsal Club