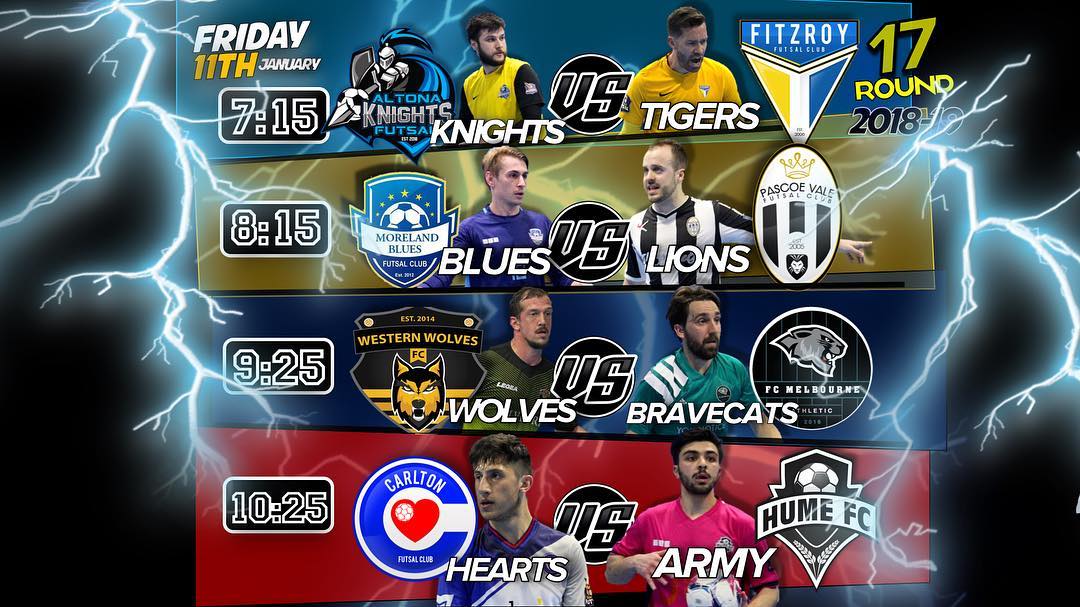 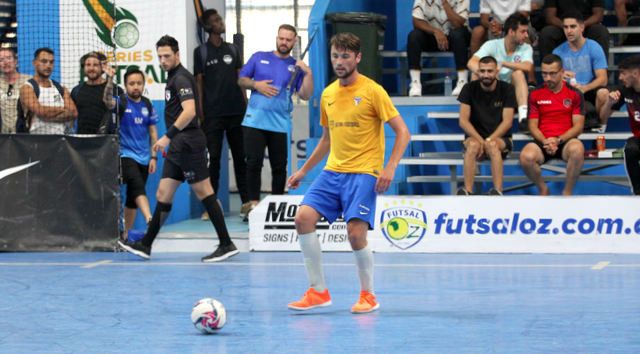 Our first game for 2019 saw Altona Knights looking to claw their way out of a relegation battle, take on title chasers Fitzroy. It was the Knights who would strike first through Nikola Jurcic who netted from close range. Fitzroy hit back immediately as Leo Kimpara found the net to restore parody, before Llewellyn Stone turned well and fired Fitzroy into the lead. Stone then netted for a second time to give his side some breathing space, before Jose Filho struck to make it a 4-1 lead. Tal Galper turned well and fired home as the game was getting away from Altona as the Tigers built a handy 5-1 half time lead.

It only got worse for the Knights in the second half as the Tigers found the net a further six times, with Filho, Galper, Rogan & Stone all finishing with two each, while late goals to Harry Robotis and Jimmy Soufis sealed the win to have Fitzroy firmly in the title chase. 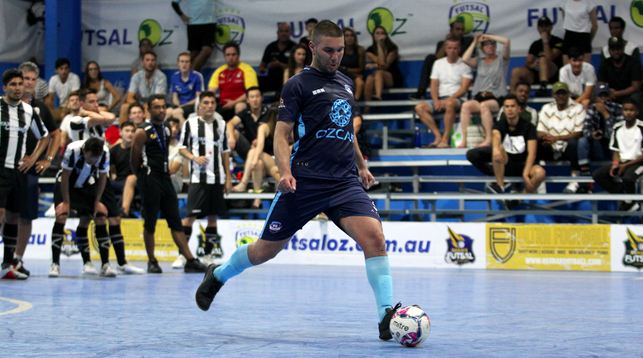 The next game of the night was the biggest on the card as Moreland faced Pascoe Vale in what had serious title implications. It was Moreland who struck first with Matthew Vragovski squeezing an effort home from a free kick, before Jason Barrientos found the net to double the Moreland advantage. Pascoe hit back before the break with Lucas Vaz finding the net to keep the lions in the contest at the break.

Early in the second half Moreland extended their lead through an Atay Ibrahim toe poke as the Blues were running away with it. Pascoe continued to fight and got a goal back through a classy Rabona finish from Behrad Behzadpour to have his side within a goal, before Joao Da Silva fired home from a tight angle to bring Pascoe Vale level and it was game on. Moreland would find the net again in the dying minutes as Adam Cooper tapped home to all but seal a Moreland win, but Pascoe showed their fighting spirit again as Gerardo Soto fired home from a corner to send the game to penalties.

It would be Moreland who won an epic shootout and for the second time this season against Pascoe Vale to seal a crucial win for the Blues. 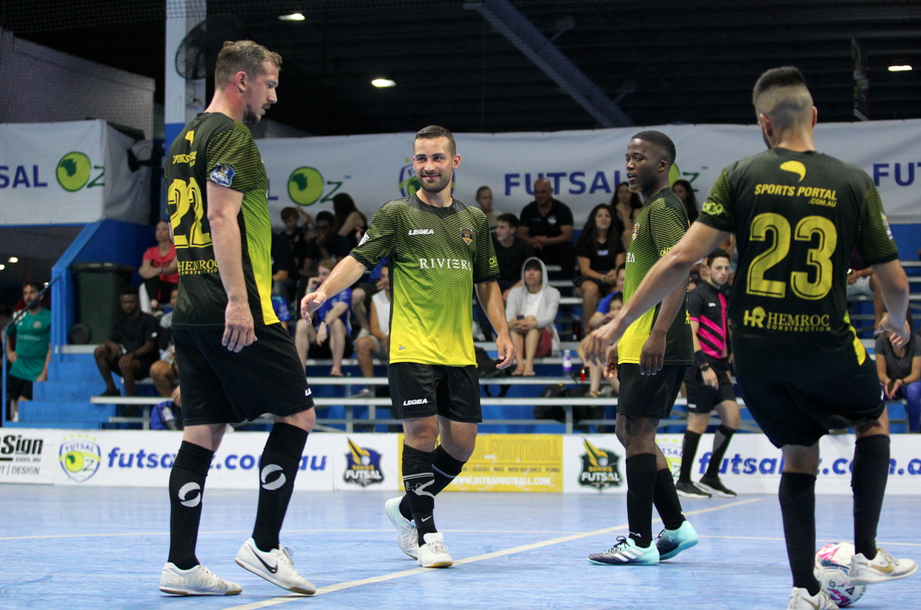 Next up saw the Western Wolves face Melbourne Athletic in a big game in the course of the relegation battle. It was the Wolves who struck first through a Rodrigo De Faria strike to give his side the lead, before Ubeyde Cicek also found the net from range to double the advantage. Ben Grillo turned his defender to halve the deficit, before some nice play saw Melvin Becket find the net to restore the Wolves advantage. Simone Pelletti hit a rocket into the top corner to keeper Athletic in the game at the break. 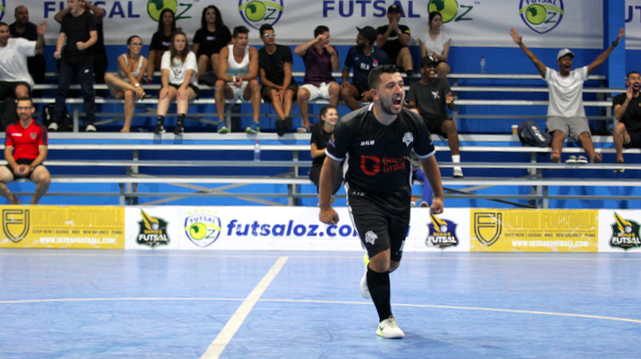 The final game of the night saw Carlton take on Hume in what was a must win for both. Hume drew first blood with Moe Matar scoring on his right foot to give his side the lead, before Carlton hit back through a Rico Hauser strike. Hauser then netted again to give his side the lead, before Hauser rocketed home for a third time as he was in the mood giving his side a 3-1 half time lead.

Early in the second half Nejdett Sahin finished from close range to keep his side in the contest, before a flurry of goals from Carlton guided them to a handy lead with Arturo Garzon netting before Chaaban Rajab converted for a 5-2 lead. Hume were not going away as they pulled a goal back through an own goal from Iggy Lahiff Jenkins, and just moments after netted again as Moe Matar found the net. Matar was in the groove and completed his hat trick to bring Hume level. With just seconds on the clock Hume found an unlikely winner as Zois Galanopoulos found the net to give Hume a memorable win and shock the defending Champions to blow the title race wide open. 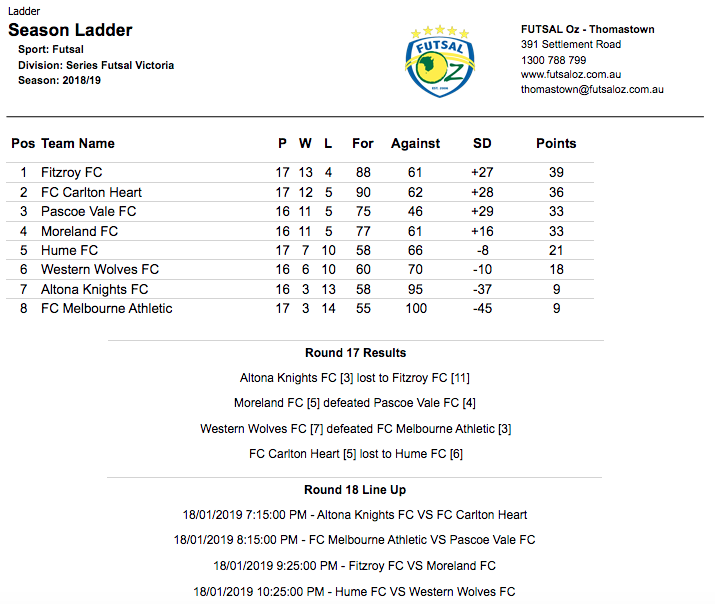