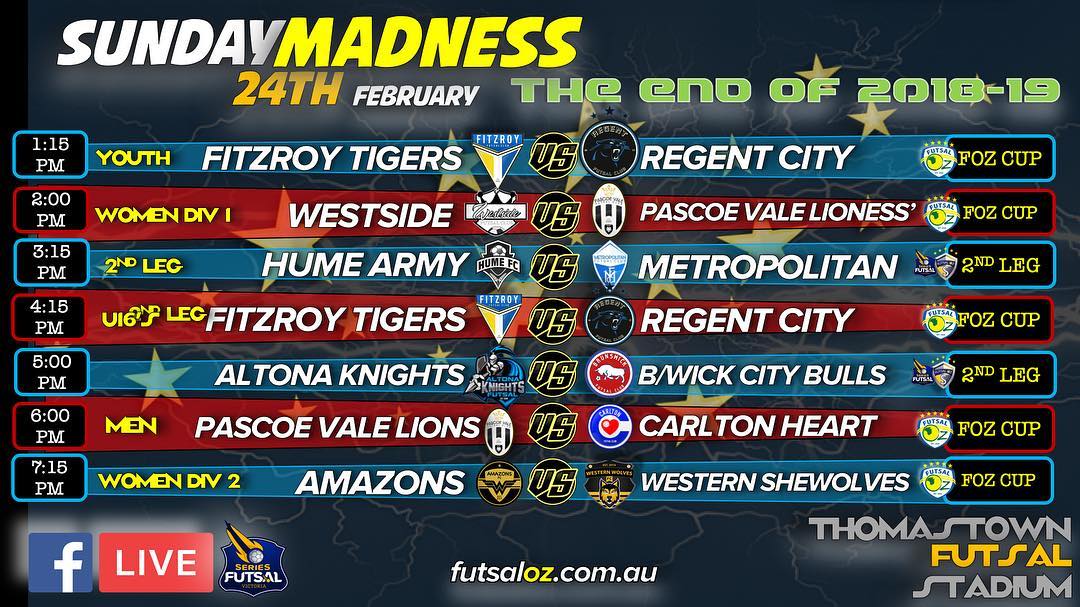 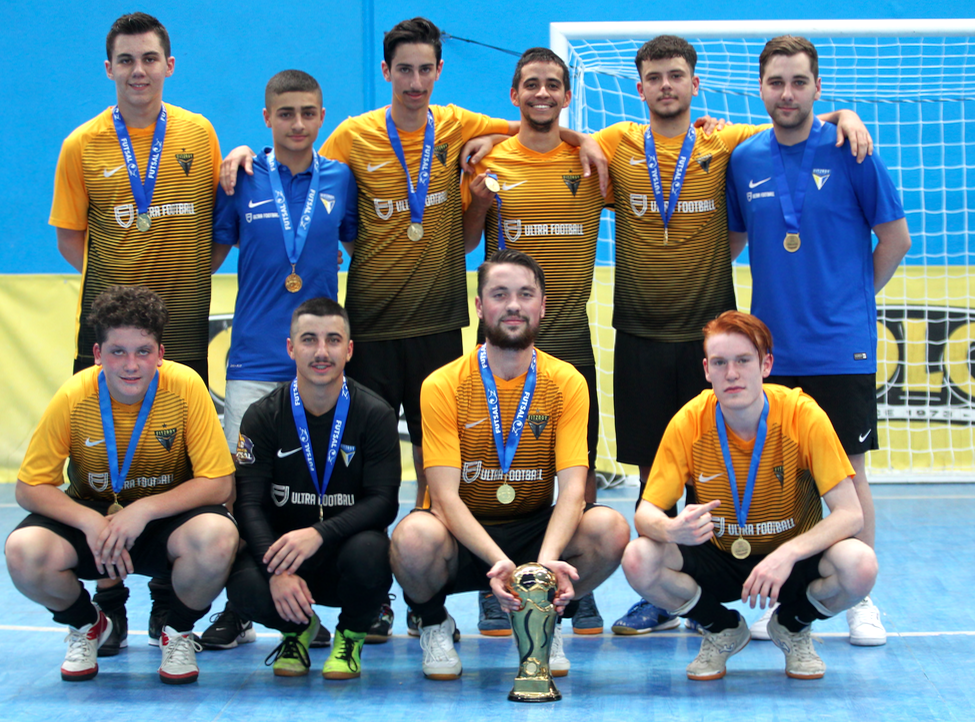 The opening game of a Sunday full of action saw the final of the Under 21’s Futsal Oz Cup. League Champions Fitzroy faced second placed Regent City in what was built as a massive clash. It was Fitzroy who struck first as Scott Rogan won the ball and toe poked through the legs of the Regent stopper for the lead. Rogan then turned provider as he found Harry Robotis at the back post who tapped home to double the advantage, before Rogan beat his man and fired home on his left foot for a three-nil lead. Jose Filho got in on the act as he tapped home for four, before Cosimo Russo got himself a goal as Fitzroy had an amazing 5-0 lead at the break.

Fitzroy were not letting up in the second half and got their sixth through Jose Filho, before Elias Parthimos found the net making it a 7-0 lead. A late goal to Cosimo Russo ensured Fitzroy would take home the League and Cup double in what was a dominant display in the final. 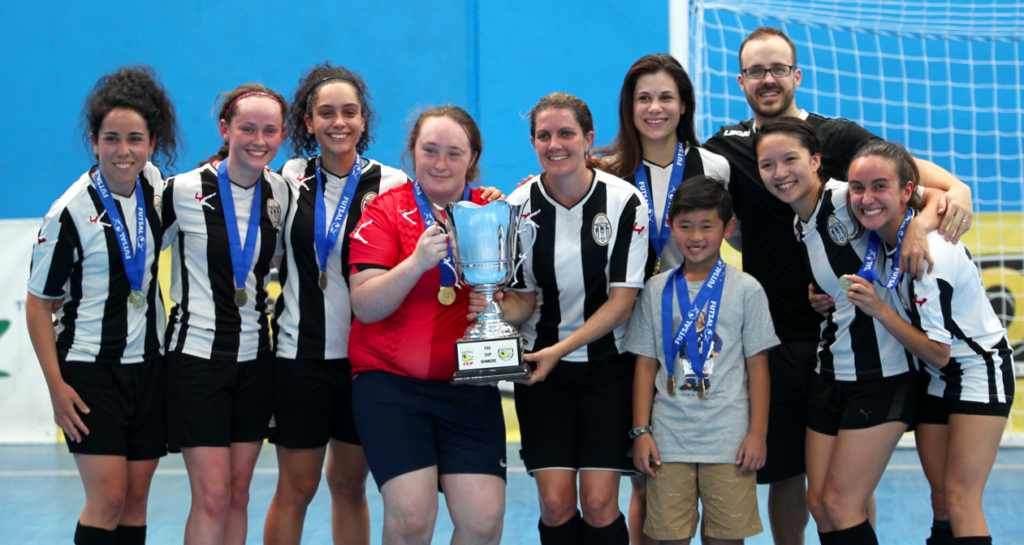 Next up saw the Womens top division final where league Champions Westside took on bottom of the table Pascoe Vale from the regular season. It would be Pascoe who struck first as Beatriz Gonzalez strolled through the Westside defence and picked out the bottom corner to give her side the lead. It wasn’t until the halftime whistle that Westside drew level as Lisa Fonua found the net to take her side into the break on level terms.

The second half saw a twenty minute stalemate as neither side added to their tally in this time, with both goal keepers at the top of their game, the tie went into extra time.

It wasn’t until the final minute of the second period of extra time that Pascoe Vale found their match winner, when Abbey Flight struck to seal the deal for Pascoe as they come from bottom of the league to take out the top prize against the league Champions. 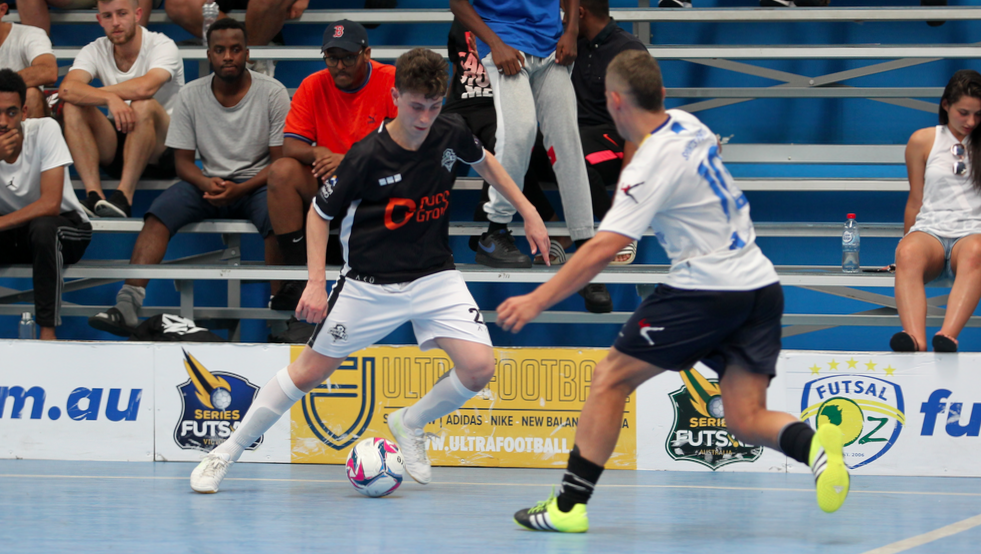 The next game on the card saw Hume of Series Futsal Victoria, take on Metropolitan of the State League Championship, in the second leg of their promotion playoff. With Hume holding a slender one goal lead going into the second leg, Metropolitan started like a house on fire as they created a number of chances, only to be denied the by brilliant Enes Ozkoca. Hume then opened the scoring as Zois Galanopoulos found the net to give his side the lead, before Muhammed Temel picked out the bottom corner from a free kick to double the advantage. Galanopoulos then struck for a second time as Hume held a commanding 6-2 lead at the break.

Metro continued to push in the second half but Hume looked too strong as they added to their lead late on with goals from Hanna Shamon & Kursut Guler snuffing out any chance of a comeback, while Alija Redzepovic got a late consolation but it wouldn’t be enough as Hume ensured they would be playing Series Futsal Victoria in the 2019 season, while Metropolitan are confined to another season in the State League. 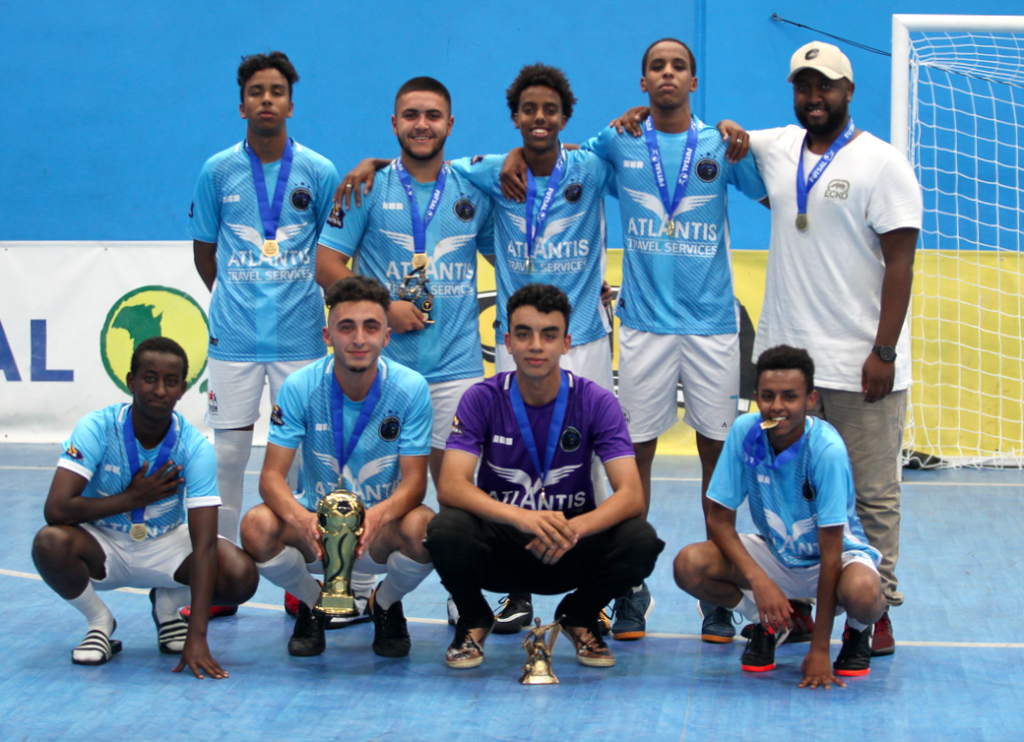 Next up saw the Under 16’s grand final take centre stage as Fitzroy took on Regent City. In what is always a blockbuster affair, Fitzroy got the jump on Regent as Elias Parthimos finished on his left foot to open the scoring. Regent hit back with two goals in quick succession as Loukmen Khodr & Ali Atosh found the net to give City the lead. Fitzroy responded before the break as Parthimos got his second of the game to see the sides go into the break level.

The game was on a knifes edge and it was Regent who looked like they would take home the chocolates as Shuayb Abdulkadir restored the lead for Regent, before Khodr got his second of the contest to open up a two goal cushion Fitzroy turned to the fifth man tactic and pulled a goal back through Abed Chandab to set up a grand stand finish, and a strike from Parthimos struck the post in the dying second to ensure Regent City would claim their first piece of silverware in the Under 16’s with a cracking victory. 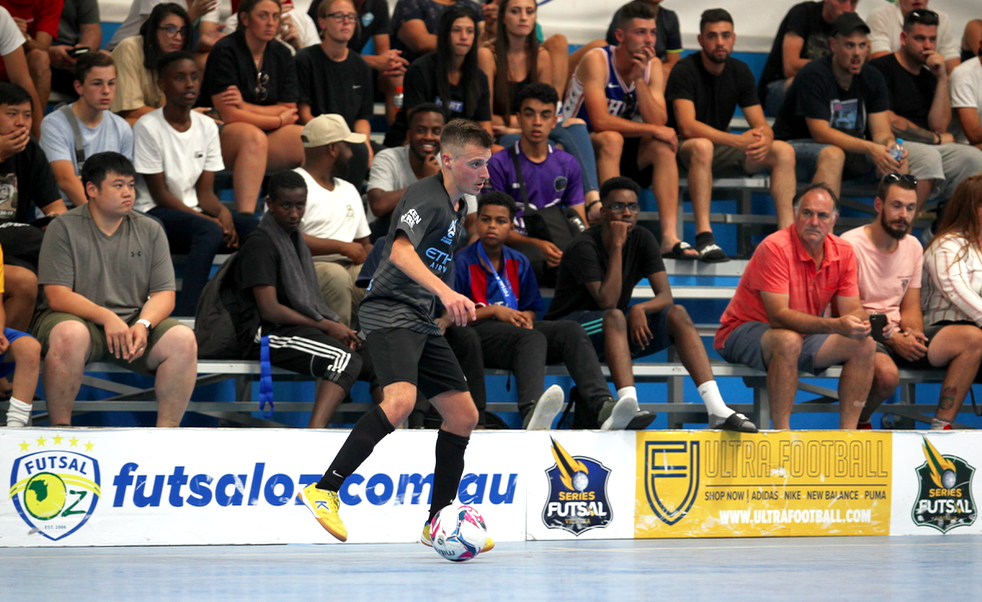 The second of the SFV playoff games saw Altona looking to overturn the three goal deficit from the first leg as they took on Brunswick. In what was a bit of a chess game in the first half, Altona would pull a goal back through Durim Cura to have his side within two goals and well on top at the half time break.

Early in the second half, Brunswick steadied the ship finding the net through first leg hero Alejandro Manuel-Gomez to restore their three goal cushion. Altona were not going to go away without a fight though as Mark Saric pulled a goal back for the Knights, before a long ball from Tony Saric hit the crossbar, before rebounding back into play where Jayden Merceica found the net to have his side within one. Altona were then level when Tony Saric struck from close range to send the Knights wild. With time running out, Brunswick would get the crucial goal as Manuel Gomez struck for the second time in the game with what would prove the match winner as The City Bulls booked their place back in Series Futsal Victoria, after a season away, while the Knights stay just one season in the top flight as they make their way back down to the State League Championship. 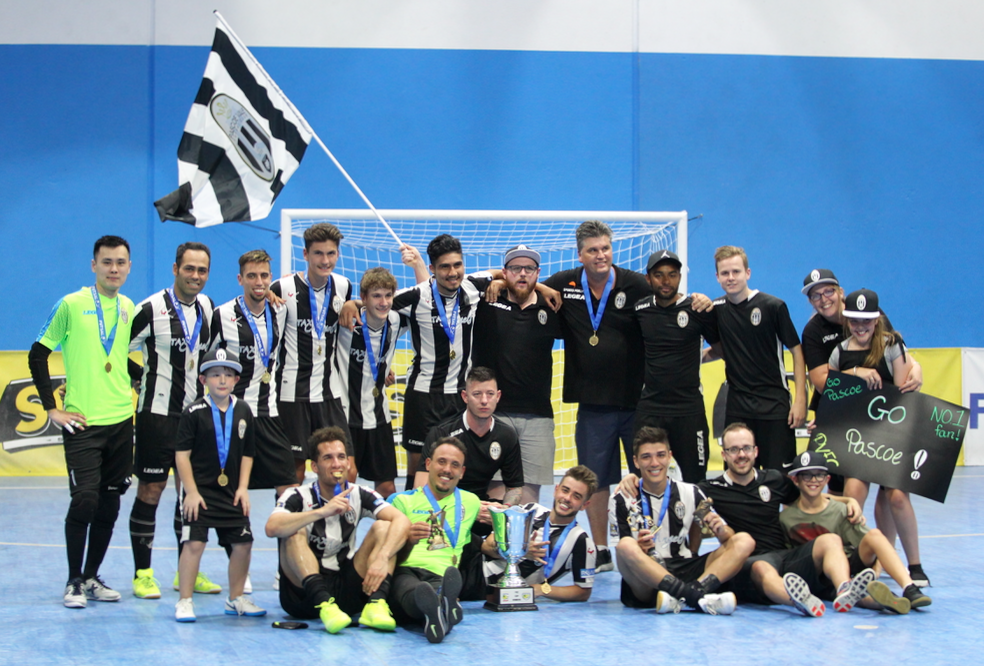 The final of the mens Futsal Oz Cup was next up on the card as Pascoe Vale took on Carlton in what was a mouthwatering encounter. It would be the Lions who opened the scoring with Henrique Fernandes Pimneta finding the net to give his side the lead. Pascoe Vale would then double their advantage through Behrad Behzadpour, and when Gerardo Soto found the net to make it 3-0 at the half time break, Pascoe Vale were in control and the Heart had work to do.

Early in the second half Carlton hit back through youngster Sinan Gluhak who found the net to keep his side in the contest, but their work was undone when Mauricio Novak found the net from a free kick to restore the three goal cushion, and when Behzadpour netted for a second time it was all but over for Carlton. A late goal from Pimenta saw him put the polish on the result as Pascoe Vale sealed the Futsal Oz Cup in style for their first piece of silverware since 2016. 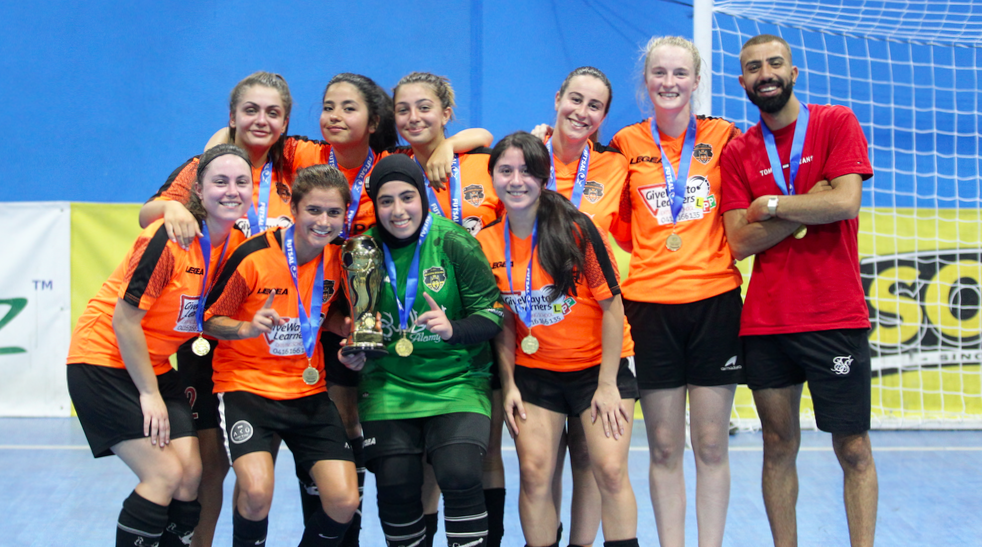 The final game of the day saw Western Wolves face Melbourne Amazons in the Futsal Oz Cup 2 Womens encounter. It would be the Wolves who struck first through a well worked move that saw Mary Hubeek pick out Alissa Kaddour at the back post to give her side the lead. The Wolves then doubled their lead when Fatima Abou-Eid found the net to have her side 2-0 up at the break.

The Amazons pulled a goal back early in the second half when Aliesha Elker finished her one on one chance to have her side back within a goal. The Wolves extended their lead again when Mary Hubeek struck off both posts and in on her left foot to restore the two goal advantage. A late strike from Elker set up a grand stand finish, but it wouldn’t be enough as the Wolves hung on for their first piece of silverware in a tight contest.