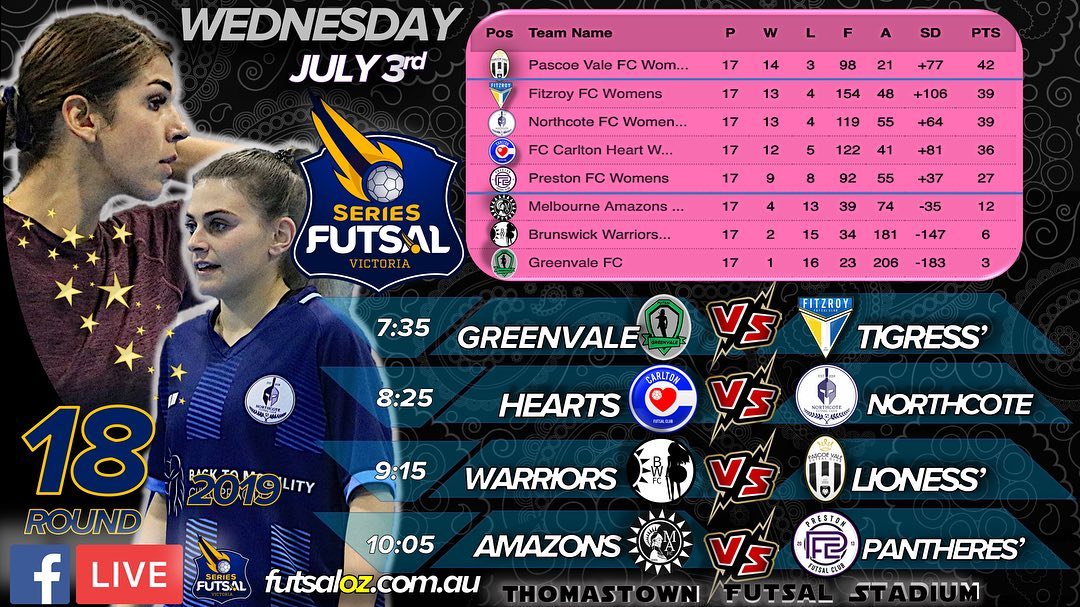 The opening game of the round saw bottom of the table Greenvale take on title chasers Fitzroy. The Tigeress’ had been in fine form of late and looked set to continue the trend as they got out to a dominant 7-0 half time lead, with Elaina Vatcky leading all scorers with four to her name, helping her side to a big half time lead.

Greenvale managed to hit the scoresheet in the second half but it wouldn’t be enough as Fitzroy ran out convincing winners with Vatcky ending the game with five goals to her name with Em Coppock also bagging five in a commanding win as Fitzroy continue their push for the title.

Next up saw Carlton take on Northcote as they looked to keep their title hopes alive. A massive game in the context of the season, it was Carlton who took the early lead as Rebecca Saber squeezed her shot home at the near post for the advantage. Northcote would draw level as Monica Fonua struck before the break to go into the half on level terms.

Northcote stepped it up a notch in the second half and proved far too strong as they added four unanswered second half goals to take home a crucial win and remain in the hunt for the title, as Fonua completed her brace, supported by goals to Penny Bakopoulos, Mary Hubeek & Mel Garcia helping Northcote to a convincing win.

Next up saw a struggling Brunswick take on league leaders Pascoe Vale. A slow start to the game to the league leaders but they soon found their grove as Jess Byrne opened the scoring, before Anita Caro & Liesl Woods chimed in with goals to make it a three goal advantage. Christine Fonua lashed home on her left foot before the break to have her side four up at the break.

The second half was one way traffic for the Lioness’ as they added a further six unanswered goals to take home a massive victory, getting a healthy boost to their goal difference in the process, as Caro finished with a hat trick, while Byrne and Woods completed braces of their own as Pascoe Vale remained on top of the table with three games to play.

The final game of the evening saw Melbourne Amazons take on Preston. Two sides who had improved throughout the course of the season, It was Preston who struck first, through a Sidney Allen strike, but the Amazons hit back through Rachel Grove to go into the half time break locked at one.

The second half was all Preston as they took the lead through a Tayla Halabi tap in, before two lates goals from Elly Torre helped the Pantheress’ take another important win as they continue their late push for a top four place.