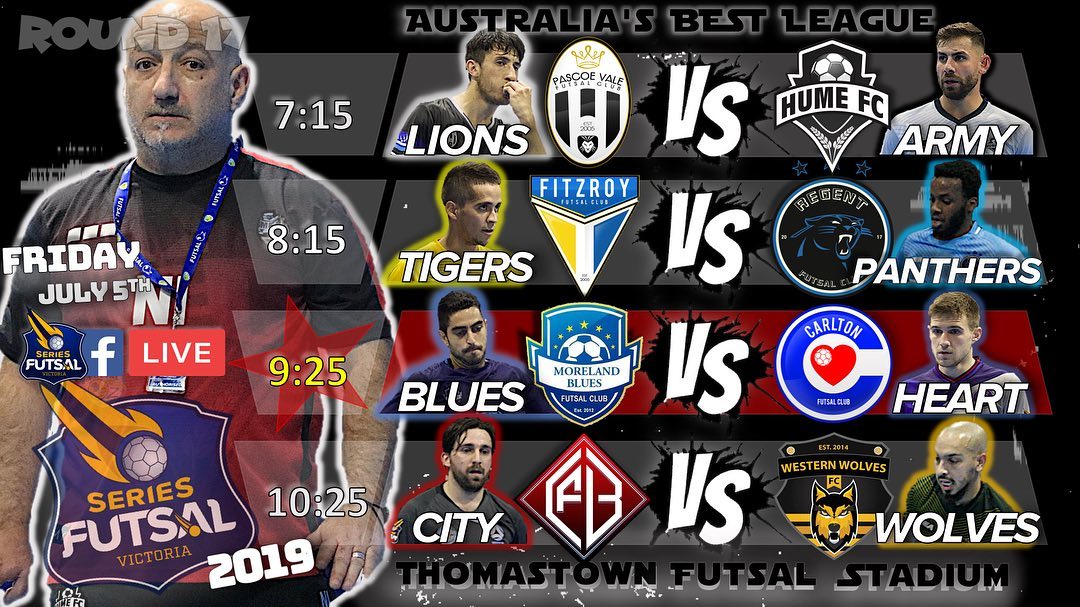 To kick off the night of Series Futsal, Pascoe Vale took on Hume in a must-win fixture for the Army as they looked to avoid the relegation zone.

Pascoe Vale dominated possession for the first quarter but were held goalless by the Hume Army. Eventually, Jake Besenyi kicked off the scoring with a deflected strike from distance with 16 minutes to go. Following a controversial tackle by Kevin Dos Santos, Pascoe Vale found themselves doubling the lead with Tyler Garner finishing off a low cross from Dos Santos. Minutes later Garner returned the favour to Dos Santos, assisting his teammate with a pass from the corner. The second half finished at 3-0.

Andre Caro began the second half with a beautifully taken goal, as he turned the Hume defender to not only find space, but also find the top right corner. Garner was putting on a man of the match performance by this point, so stepping up for a penalty and scoring with 15 minutes left on the clock only solidified the claim. A cross from Garner on the right wing saw Christian ‘Flick’ Lindermark score on his debut for the Lions, with a beautiful jumping-volley followed by cheers from teammates and spectators. The flood gates opened and ‘Flick’ scored his brace from close range off of a Arturo Garzon Diaz pass. Hume scored from close range through Aaron Phung but it was redundant as the match finished 9-1 to Pascoe Vale after Garner set up another teammate with a close ranged finish in Sinan Gluhak.

Our next fixture of the night saw league leaders Fitzroy take on the hungry Regent who were in desperate need of an unlikely win as they sat in the relegation zone.

Shockingly to the screams of the Series Futsal commentators and spectators, Regent’s Michael Nguyen opened the scoring with a greatly placed striker from distance into the bottom left corner. It didn’t take long for Fitzroy to respond as Scott Rogan would score from close range almost immediately. Joaquin Jimenez found himself receiving a backheel, which he would take in his stride and score to put the underdogs back in the lead. The half ended with the favourites trailing 1-2 and both teams looking up for it.

The second half would remain a tight affair, until Mo Matar would take to the court. It only took him a couple of minutes to score his brace. His first goal was a fumble from the Regent goalkeeper, but his second was a nicely placed strike high into the net. A great contest between two valiant teams saw Fitzroy take the needed 3 points to stay clear of Moreland in the title race.

Our third fixture of the night saw Moreland, hungry to maintain the 3 point gap between themselves and Fitzroy, take on Carlton Heart who are fresh out of disposing of Regent in Round 16.

Almost immediately, Moreland’s Mohamed Temel put his side up 1-0 with a simple low-finish from close range. Minutes later, Temel would strip Rico Hauser of the ball in the Carlton defence, leading to his early brace after a fantastic finish. It was the #11’s night as Temel would find himself blasting home two fantastic strikes from the left wing to get his third and fourth of the night. Eventually Carlton would close the gap slightly as Syahmi Sarip would get on the scoresheet after a decent strike from distance. The half ended 4-1 to Moreland with Carlton looking stronger than they did earlier.

The half would begin with an immediate goal from Carlton’s Veteran Ernie Simsek to halve the deficit and supply his side with some hope. Several minutes passed as both teams were looking hungry, but it was Hayden Kanjo who would put his side well and truly back in the game with a great first-timed finish. If Adam Cooper wasn’t having a good enough game already, it was an incredible long-distanced strike that almost pierced through the netting of the top corner to stretch Moreland back to a two-goal lead. With under a minute to go tensions were flaring and fouls were persisting as goalscorer Simsek saw himself sent off as he received his second yellow card. The match finished at 5-3 with Moreland maintaining the chase for top.

The last game of the night had Western Wolves face the prospect of finally escaping relegation following Hume’s loss earlier tonight. In order to achieve that though, they needed to defeat a desperate Brunswick who sat in last place.

The game kicked off with high intensity, as Wolves’ Reda Zenfuri would open the scoring with a nicely taken strike from close-range. The game maintained its competitiveness for the next few minutes and it was Ubeyde Cicek who would double the lead for Wolves scoring off of a free kick. Giovanny Garcia would halve the deficit from close range off of a greatly placed pass from teammate Michele Salvi. With mere seconds to go, Andrea Zaccone would score from centimetres out off of a switched pass from Simone Pelletti to equalise. The goal was followed by roars from the Brunswick players and coach.

To begin the second half Wolves were looking fiery, scoring almost immediately through Cicek to get his brace, once again from close range. The team-leading would quickly snatch their second of the half through Cicek, who was poaching for the Wolves, getting his hatrick of simple finishes. Brunswick weren’t going down without a fight though, as Salvi made another mark on the game slotting a great-but-simple finish past Wolves star keeper Billy Atik. Minutes later Salvi would switch an assist to teammate Andrea Zaccone to equalise once again. The game intensity practically doubled with Garcia and Zenfuri both scoring for their sides to keep it level at 5-5. With 1 minute to spare Zenfuri would score to put Wolves in the lead once again leading to emphatic celebrations to finish the game.