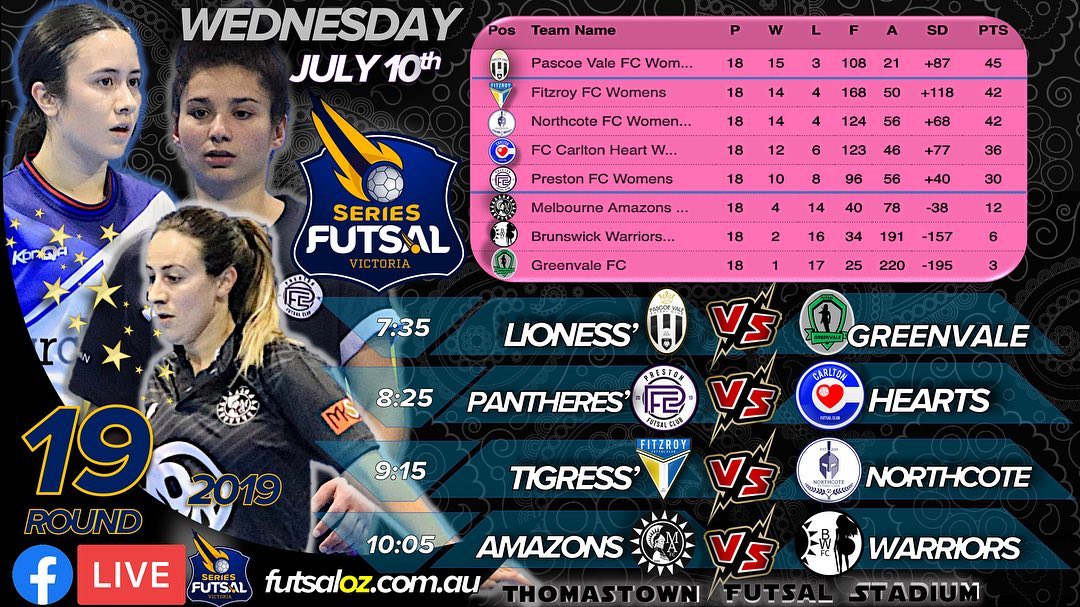 The opening game of the evening saw league leaders Pascoe Vale take on cellar dwellers Greenvale. Pascoe were looking to take another step towards the title and got off to the perfect start as they piled on seven unanswered first half goals, lead by braces to Christina Fonua & Evangelia Parthimos putting them in the box seat at the half.

The second half was all about bossing the goal difference for the Lioness’ and they did a fine job of it as they added a further nine goals to no reply, as Parthimos finished with a game high five goals, while Fonua and Liesl Woods both completed hat tricks in a big win for the Champions elect.

Next up saw an in form Preston take on Carlton Heart in what was looking like a close contest on paper. It was Preston who drew first blood as a lovely run from Sidney Allen was finished off to give her side the lead. Carlton would draw level through a Zoe Tizard strike from close range, but again Preston would regain their lead through an Elly Torre strike, before opening up a two goal advantage with Guliana Pavlia finding the net to give her side some comfort. Carlton would pull a goal back before the break through a Steph Peluso strike to go into the break trailing by just one.

Midway through the second half, Preston would restore their two goal cushion through an indirect free kick, which Allen converted to have her side leading 4-2. Peluso got her second of the game to have her side back within a goal but they would fall just short, as Preston hung on for another impressive victory.

Next up was the game of the night as second placed Fitzroy took on third placed Northcote with the loser to see their chances of winning the title diminish. Only a win would do for both teams and it was Northcote who struck first as a stunning strike from Daniella Galluccio gave her side an early lead. Their lead was doubled when Monica Fonua finished her one on one chance as Northcote had raced out of the blocks in this one. Fitzroy got a goal back before the break as an Ebru Efe strike was parried into the path of Alexandra Gummer who finished to halve the deficit at the break.

Early in the second half, Fitzroy got themselves level as a long throw from Zoe Lovatt was controlled and finished off by Gummer for her second of the game as she levelled the game at two. Fitzroy were then ahead for the first time on the night as Gummer completed her hat trick with a rocket of a strike from range for a 3-2 lead. Northcote were not about to lay down and roll over though, as a cracking strike from Eleni Fakos found the net from a side ball to tie the game at three in what was a fantastic game so far that looked destined for penalties. With just seconds on the clock a long throw from Lovatt was forced to ground with a contest in the area and it fell to the feet of Gummer who made no mistake with the finish as she snatched the points for Fitzroy to now set up a title deciding game against Pascoe Vale next week.

The final game of the evening saw Melbourne Amazons take on the struggling Brunswick Warriors. The first half saw an contest with the Amazons edging the scoring to carry a handy 2-1 lead into the half time break.

The second half saw the Amazons prove too strong as they ran out convincing 5-2 winners, with Mariella Bagang bagging a brace, supported by a brave to Monique Kolyvas to seal a handy victory for the Amazons as they look to end their season on a high.