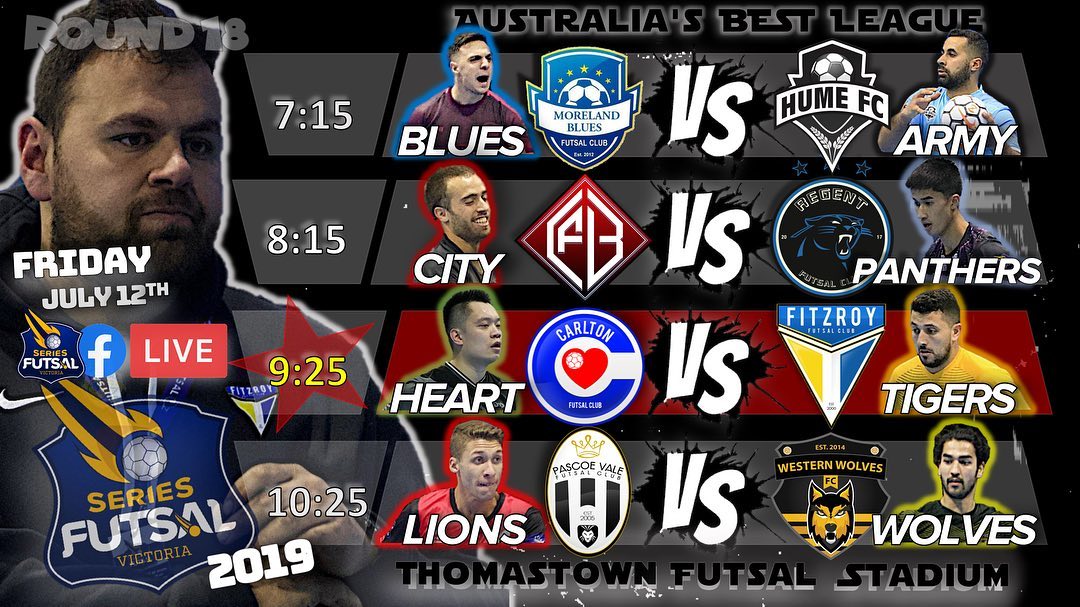 Inform Moreland took on an out-of-form Hume side as both teams fought for much needed points.

The first half was majorly one-sided with Moreland dominating 7-2. 2 goals and 5 assists from Adam Cooper had already guaranteed him Man of the Match for this one. The other goalscorers for Moreland were Muhamed Temel with one and Atay Ibrahim and Lucas Vaz both with a brace each. Aaron Phung got his brace for Hume to offer some form of a highlight for the Army.

The second half was even more annihilation from the favourites as it ended 16-4. Moreland’s second half goalscorers consisted of Ibrahim with 3, Cooper with 2 and Temel, Vaz, and Kui Nu all with one each. Hume managed one more goal through Andres Delgado but that was all for them as they fell victim to a hungry Moreland side. The highlight of the match was Adam Cooper’s fabulously struck volley from distance to get his fourth of the night.

Relegation battlers Brunswick and Regent hosted our second match of the night with both teams sitting on at equal last with 12 points each prior to the fixture.

The first half was one to watch as both teams were looking hungry for the 3 points. It was Giovanny Garcia who kicked off the match with a brace to bring Brunswick 2-0 up. With his side trailing by 2, it was Regent’s Kevin Lam who wasn’t having any of it as he netted a fantastic hattrick to take his side into the second half with the lead.

The second half remained competitive with both sides putting in their best efforts in an attempt to avoid relegation. It was Abdirizak Kadir who dominated the half getting himself a brace and an assist. His teammate Abdulkadir Mohamed aka Fundi also got himself on the scoresheet. In an effort to regain the lead, Andrea Zaccone managed to get one for his side accompanied by a late own-goal but they were ultimately not enough to make an impact.

The first half provided spectators with a great showing as the league leaders Fitzroy mostly trailed. A Hayden Kanjo header, own goal and strikes from Chaaban Rajab and Hayden Razbocan were enough to put 4 past the Tigers. Fitzroy’s Yohai Karube got an early goal, but it was Leo Kimpara’s strike late in the half that gave the favourites the momentum they needed to enter the second half with.

The second half was nothing short of a spectacle with Cosimo Russo and Chaaban Rajab both making their marks on this high-stakes matchup. With both teams up for it, this unmissable affair ended 7-7 with Fitzroy relentlessly fighting to get level for most of the game. It was a Russo hattrick, a Scott Rogan striked deflection and Karube’s second of the game that got the Tigers back into it. Carlton continuously kept Fitzroy chasing them though, through 2 more goals from Rajab and 1 more from Kanjo, but this match ultimately ended in penalties.

This match saw plenty of goals, but in this shoot-out, only one was scored. The penalty scorer was Jose Filho, helping Fitzroy maintain top spot.

Our last game of the night saw an inform Pascoe Vale take on a desperate-for-points Western Wolves.

The first half, although lacked an immense number of goals, still provided spectators with a great matchup. Wolves went down early to a great Andre Caro strike, but they didn’t slow down, consistently putting pressure on Pascoe Vale. Although the Lions held more possession, they had to deal with a fiery Billy Atik in goals for Wolves. It was Rodrigo De Faria who equalised with a nicely slotted finish 1 minute from half time.

The intensity continued in the second half as both teams were refusing to lie down and lose this battle. A red card for Arturo Garzon Diaz put Pascoe Vale in a vulnerable positions late in the game. It was a brace from Ubeyde Cicek and a goal from Mohamed Rahimi that kept Wolves in it whilst it was Caro’s second, Kevin Dos Santos’ first and a Tarek Zoubir own goal that took Pascoe Vale into penalties.

Cicek and Caro both scored the first penalties for their sides, but it was Rahimi who scored the winner for the underdogs as Wolves won this one.