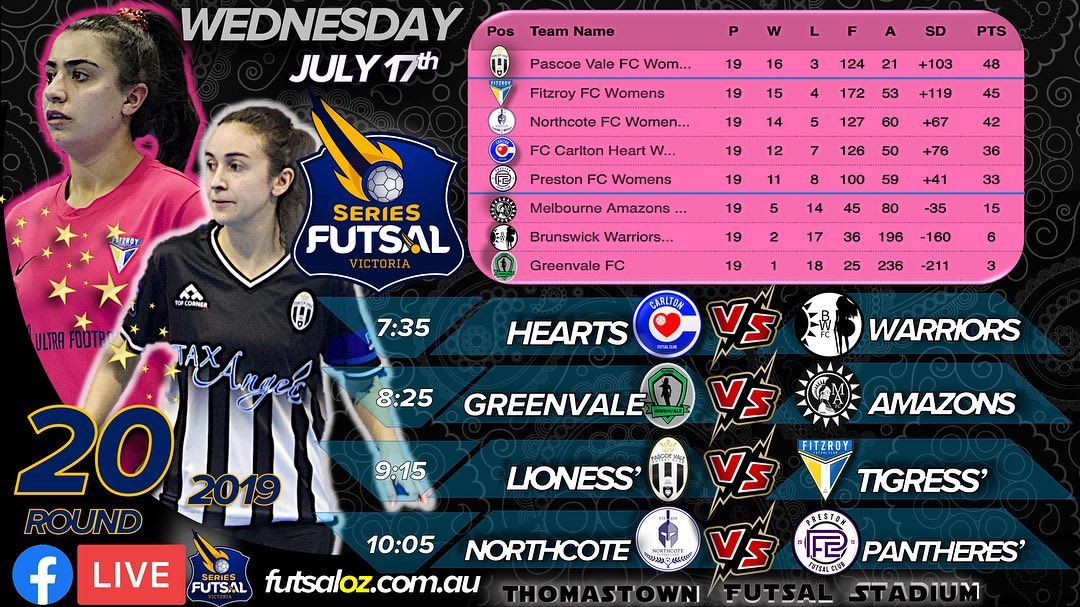 The opening game of the evening saw Carlton take on a struggling Brunswick Warriors. In what was expected to be a routine win for the Heart, they cruised to a 6-0 half time lead on the back of a brace from Rebecca Davies, and singles to Savanna Anastasopoulos, Anthea Ranieri. Ana Carolina & Rebecca Saber all but had the game won at the half time break.

The second half was more of the same as Carlton were simply too good, with Davies & Anastasopoulos both ending the game with hat tricks, while Saner & Tizard finished up with braces in what was a comfortable win for the Carlton side.

Next up saw Greenvale take on the Melbourne Amazons in what looked an interesting clash on paper. The Amazons held a slender half time lead with Bianca Lee opening the scoring, before Louisa Verratti doubled her sides advantage. Greenvale hit back before the break through a Dahlia Badra strike to keep her side in the contest.

Amazons stepped it up a gear in the second half and piled the pressure on the scoreboard with Lee adding a further three goals to take her tally to four for the game, while Monique Kolyvas & Rachel Grove both found the net in what was a comfortable victory in the end for the Amazons.

Next up saw the game of the night with huge ramifications to come, as top placed Pascoe Vale faced second placed Fitzroy. A win for Pascoe would wrap up the title with a game to spare, while a victory for Fitzroy would send the title race to the final day. The Tigers would strike first as a lovely passing move seeing Claudia Fruscalzo find Stef Oddo at the back post to give her side the lead. The lead was soon doubled as Oddo caught Christine Fonua out of her goal to give her side a two goal cushion. Pascoe Vale pulled a goal back through a rocket from a side ball, put away from Liesl Woods to have the Lioness’ back in the contest at the half time break.

Early in the second half, Fitzroy would restore their two goal cushion when Erin Clout found Em Coppock at the back post who converted with ease. Pascoe continued to fight and a Bruna Silva strike ensured there would be a grand stand finish, but it wasn’t to be as Pascoe threw everything at Fitzroy but were caught with Fonua out of her goal again as Clout toe poked home the sealer to send Fitzroy top of the table on goal difference with one round left in the season.

The final game of the night saw Northcote take on Preston in what was the friendly rivalry and always a close game. After a close start to the game, Northcote opened the scoring through Monica Fonua as they got themselves the lead. Some lovely play from Preston was finished off at the back post by Sidney Allen to go into the half time break level at one.

The game was in the balance and Northcote again put themselves ahead with Fonua netting for a second time, before Fonua completed her hat trick to have Northcote holding a comfortable lead. Sidney Allen picked out the top corner from a free kick to set up a grand stand finish, but it wasn’t to be as Northcote held on for the victory.