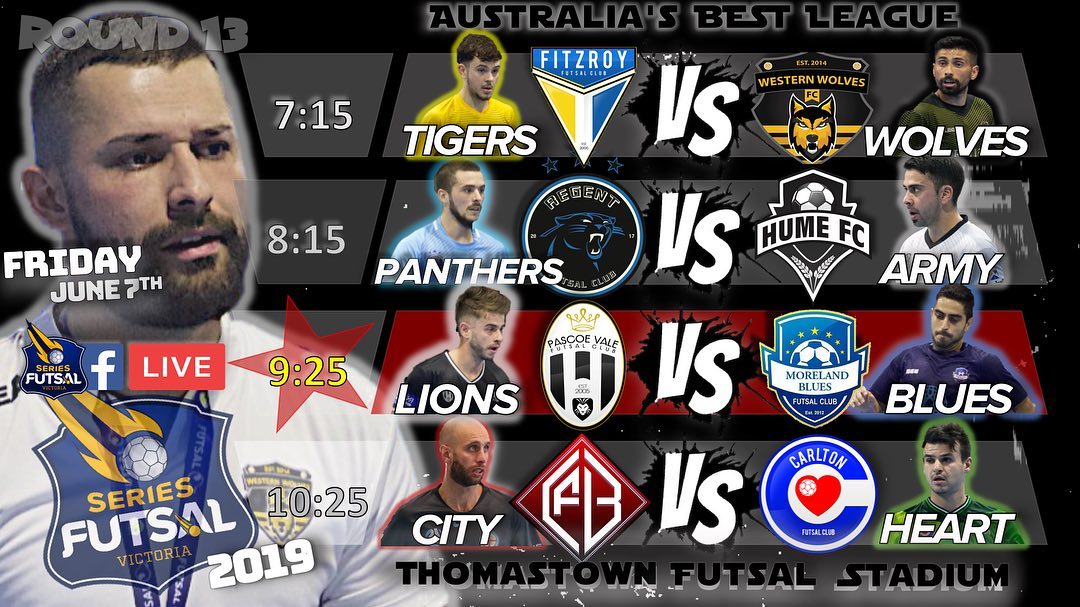 To begin the night, top-of-the-ladder Fitzroy took on a Hume side desperate for points as their hopes of avoiding relegation continue to slip.

The first half was predominantly comfortable for the favourites Fitzroy, although the deceiving scoreline may suggest otherwise. Fitzroy managed 5 quality goals with Cosimo Russo getting a hatrick and Fernando De Moraes, Scott Rogan and Jose Filho all getting one each to their name. Hume managed to enter the second half with their heads just above the water thanks to a brace from Behrad Behzadpour and a goal from Aaron Phung.

Fitzroy showed their ruthlessness and tenacity as they really switched it on in the second half turning their 2-goal-lead into a 13-goal-lead. Moe Mater, Filho, and youngster Harry Robotis each got one second half goal to their name. Rogan got a brace making his hatrick for the game with the goalkeeper shirt on as Fitzroy continuously attacked Hume with an extra onfield player. It was the Russo show though, as he scored 5 second half goals, finishing the match with 8 to his name.

With Moreland’s star man Adam Cooper missing this match due to yellow card accumulation, it was looking to be a competitive contest between Regent and Moreland.

The first half was, although physically competitive, an example as to why Moreland are chasing Fitzroy at the top of the ladder until the final days of the season. It ended 6-2 with Atay Ibrahim getting a fabulous four goals under his belt early in the match. Muhamed Temel and Taner Korkmaz also got their names on the scoresheet with a goal each. Regent found some hope through goals from Shaf Ibrahim and Kevin Lam but with Moreland flying high, these goals ultimately weren’t enough to be considered a serious threat for the rest of the half.

Although the first half transpired the way it did, Regent came out firing in the second half with goals coming from Osman Ahmed, Ali Al Sharani and Ibrahim to make it 5-6. Although they looked strong, these goals ultimately weren’t sufficient in their attempts to gain the lead as Lucas Vaz and Ibrahim both got a second half goal each to finish the game off at 8-5.

Our third game of night put an inform Pascoe Vale against a hungry Brunswick, who provided a spectacle for fans in a match of the night candidate.

The first half was as competitive as possible with both sides kicking it into gear from kick off. It was Zaccone who drew first blood as Brunswick went 1-0 up. It didn’t take long for star player Andre Caro to have his say as he finish a beautiful strike into the roof of the net to equalise. Later in the half, Christian Lindnermark tapped in a Caro-cross to take the lead and finish the half on a positive note.

The second half provided an ensemble of goals as the competitiveness intensified. Pascoe Vale’s Kevin Dos Santos, Tyler Garner, Arturo Garzon Diaz, Mauricio Novak and Sinan Gluhak all got their first of the match whilst Caro scored his second to make his brace along with the creations of many of his teammates goals. Brunswick’s Michele Salvi and Giovanny Garcia scored their braces to give Brunswick hope but it wasn’t enough as the favourites finished the match in the lead and in style.

It was Wolves and Carlton who finished the night of Series Futsal but it was the crowd that stole the show as loud cheers and boo’s echoed throughout the game and throughout the arena.

The first half was nothing short of a spectacle as both teams were playing to the excitement of the packed crowd. Ernie Simsek got his brace of emphatic finishes as he does, whilst Western Wolves’ Reda Zenfouri got his brace and Mohamed Rahimi got one for himself. Ubeyde Cicek got on the scoresheet for Wolves aswell but it was equalled with a goal from Carlton’s Rico Hauser. The first half finished 4-3.

The second half remained just as tight with Lokman Ramadan and Tarek Zoubir being menaces to Carlton throughout. Ramadan got his brace for Wolves along with Zenfouri getting one under his belt. Carlton managed to get one more goal through Rico Hauser to keep the pressure up. Although Wolves looked great throughout the match, their lapse of concentration in the final minute caused Chaaban Rajab to score a brace, complete his hattrick along with a goal earlier in the half, and equalise to take the game to penalties.

Ubeyde Cicek and Ernie Simsek both scored their penalties, but it was Tarek Zoubir who stole the 3 points with the winning penalty put passed Aaron Yu.