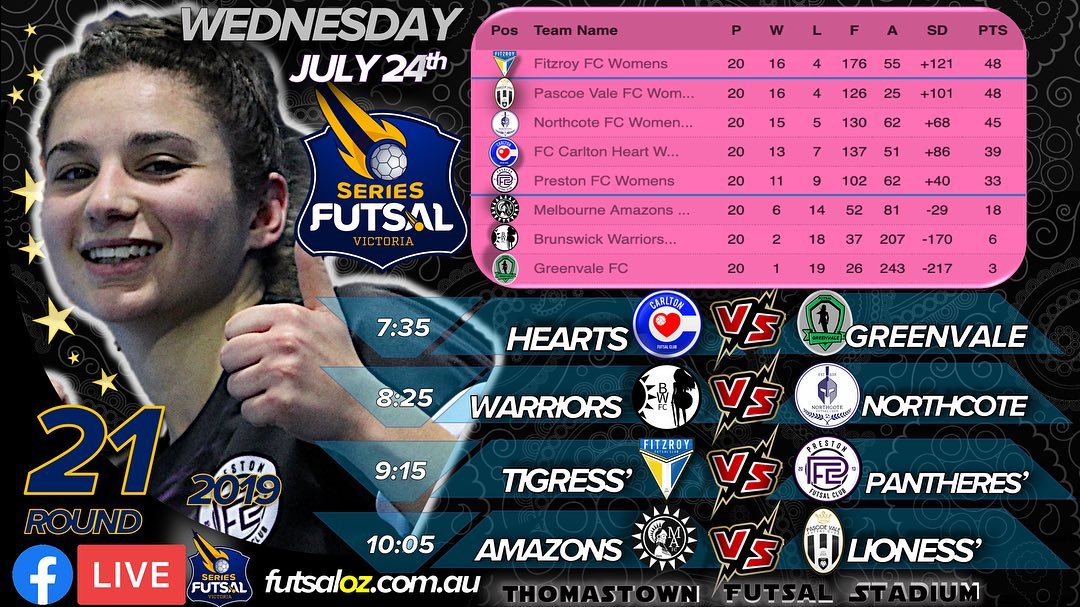 The opening game of the night saw a dead rubber in terms of the table as Carlton took on Greenvale. The last time the pair met, it was a big win for the Heart and this one looked to follow suit with twelve first half goals from Carlton wrapping up the points before the break with Ana Carolina leading all scorers with five goals to her name.

The second half was all Carlton as the scoring continued with Carlton hitting thirty goals for the second time this season against Greenvale, Carolina finishing with 11 goals for the game, a record for the season, while Zoe Tizard found the net 7 times supported by four goals from both Laila Abddullatif & Rebecca Davies to help the Heart end their season on a high.

Next up saw a second dead rubber take to the court with Brunswick Warriors facing third placed Northcote. With both sides missing a number of key players it was Northcote who found the only goal of the first half with debutant Barbara Fakos finding the net to give her side a slender half time lead.

Early in the second half, Brunswick equalised through a Natasha Jovic strike, but it didn’t phase Northcote as Barabara Fakos hit straight back to restore her sides lead. Sister Eleni Fakos then gave her side a two goal cushion. Jovic hit back to have her side back within a goal late in the contest but a late goal from Eleni Fakos killed off any chance of a comeback as Northcote end their season with a win.

Next up were the two title defining games as current league leaders Fitzroy took on an in form Preston outfit. The Tigeress’ took the lead early on as Em Coppock controlled the ball before firing home to give her side the lead. It was soon two when Georgia Cawley climbed off the bench to strike from a corner to double the advantage. Soon after Coppock finished her one on one chance to have her side three up and looking like Champions. Before the break a swift counter attack from Preston was finished off by Armina Sherifi at the back post to give Preston hope going into the break.

Early in the second half, Preston were right back in the contest with some great feet from Tayla Halabi seeing her round up the keeper and finish to have Preston back within a goal and send some big nerves through the Fitzroy camp. With the game in the balance, Fitzroy would find the telling goal as Coppock picked the pocket of Sidney Allen and completed her hat trick to all but seal the win, before Erin Clout found the net late on to have Fitzroy on top of the table as they await the outcome of the Pascoe Vale vs Melbourne Amazons game to see if they will be Champions.

The final game of the season pitted sixth placed Amazons against title chasers Pascoe Vale. With Pascoe needing a mammoth 24 goals to snatch the league title on goal difference, they started well as Abbey Flight opened the scoring, before Jess Byrne struck to double the advantage. Before the break, Bianca Lee pulled a goal back to see her side go into the half time break trailing by one and have any chance of catching the goal difference almost impossible.

Pascoe raced out of the blocks in the second half and got out to a 5-1 lead as Byrne, Flight and Anita Caro all found the net but time was against the Lioness’ as they tried desperately to make up the goal difference, and pushed until the very end, but would fall short despite an amazing season from the Lioness’ they would finish up in second place, only on goal difference.