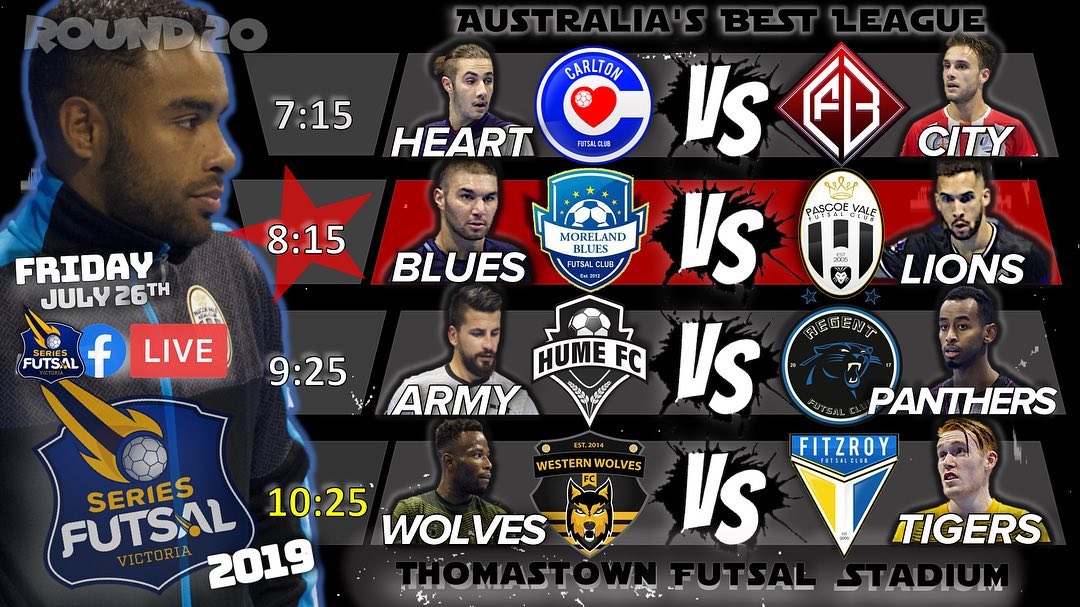 Our night kicked off with two teams in desperate need of 3 points as they both fight to escape the relegation zone.

The first half saw a motivated Brunswick take control from the beginning as they provided a one-sided goal-fest with confidence. With screams from their coach Gabriel Zeballos as support, Brunswick took pride in scoring goals through Michele Salvi, Giovanny Garcia and Luis Bulboa. Although the half offered plenty of entertaining moments, it was Andrea Zaccones fantastic brace that was the highlight for spectators. The first half ended 5-0 to Brunswick City.

The second half provided a much closer affair with Brunswick hoping to hold the large margin as the minutes ran down. Garcia opened the half with his second of the game with a passionate celebration following the goal to make it 6-0. Carlton would refused to lay down, scoring early and registering hope for themselves through Chaaban Rajab. It was a game of cat and mouse though, as Salvi would score again for City. A brace from Ernie Simsek and Rajab and a red card for Simone Pelletti gave the trailers hope, but it was Garcia with the dagger to the hearts of Carlton Heart to finish the game at 8-4.

Our second of the night saw two goliaths lock horns in a top of the table clash between Moreland and Pascoe Vale. Moreland were in need of a dominant display to pull their weight in the race to the title.

The match was set to be a potential match of the night candidate, but the ever-so-hungry Moreland  had no remorse when going 6-0 up within the first half. The game began with a nicely taken brace from Atay Ibrahim, a goal from Kui Nu and an own goal from Andre Caro to make it 4-0. Brunswick were looking lethargic and Moreland were looking hungrier by the minute as Adam Cooper put in his sides fifth of the night off the post. Just before the end of the half, Lucas Vaz carried the ball down the left wing during a powerful counterattack, only to perform and score an outrageous rainbow flick over Pascoe Vale’s young goalkeeper. The goal was followed by loud cheers from everybody watching and will surely go down as a potential goal of the season, up against his own bicycle kick against the same opponents in Pascoe Vale.

The second half showed a dominant Moreland side who were happy to defend and maintain their convincing lead. Pascoe Vale saw most of the possession but were only able to muster four goals through Arturo Garzon Diaz, Sinan Gluhak, Jake Besenyi and an Ibrahim own goal. Although scored some goals themselves, they also conceded another two as Adam Cooper got his brace and Matthew Vragovski scored late.

The third fixture of the evening saw Hume Army take on the Regent Panthers as both sides look to capitalise on the shock loss for Carlton who sit three points above both sides just outside of relegation.

The first half was intriguing for spectators as tempers flared and fouls persisted. An early goal from Michael Nguyen saw Regent take the lead early, yet both sides were looking strong. Hume were struggling to break down the Regent defence though, as they just couldn’t get their goal to get back in the game. The situation was the same in their defence as they resorted to fouls against the opposition, leading to a penalty taken calmly by Abdirizak Ahmed. The first half ended low scoring at 2-0.

Our second half only saw the heat get hotter as both sides were ready to fight until the end. Fouls were committed, insults were thrown, and intensity plateaued as red cards were given to Hume’s Aaron Phung and Resit Culculoglu. Joaquin Jimenez and Shifa Ahmed added to Regent’s lead whilst Hume could only close the gap with two goals through Zois Galanopoulos and Konrad Machoy. This game may not have been the highest scoring of the night, but it sure provided with the most drama.

Our last game of the night saw league leaders Fitzroy take on a Wolves side looking to continue their sudden climb up the Series Futsal Victoria ladder.

The game began with both teams firing as Hisham Nehfaoui was guilty of first blood opening the scoring for Wolves. It took a few minutes of consisted possession for Fitzroy, but they eventually got their equalizer through a well-taken backheel from Leo Kimpara. Cosimo Russo would then score a brace, one goal being a nicely spotted toepoke into the bottom corner, and another being a tap-in off of teammate Scott Rogan’s cross to continue maintaining their incredible partnership on the court.

The second half was a much more intense one with players and coaches losing their tempers on more than one occasion. Wolves improved as they substituted star goalkeeper Billy Atik, who apart from conceding an early goal to Jackson Shaw, had an impressive half. It was 4-1, until Nehfaoui closed the gap with a well-taken goal to get his brace, but it wasn’t enough as the game finished 4-2. The match finished with this scoreline as Fitzroy continue their journey to the league title.