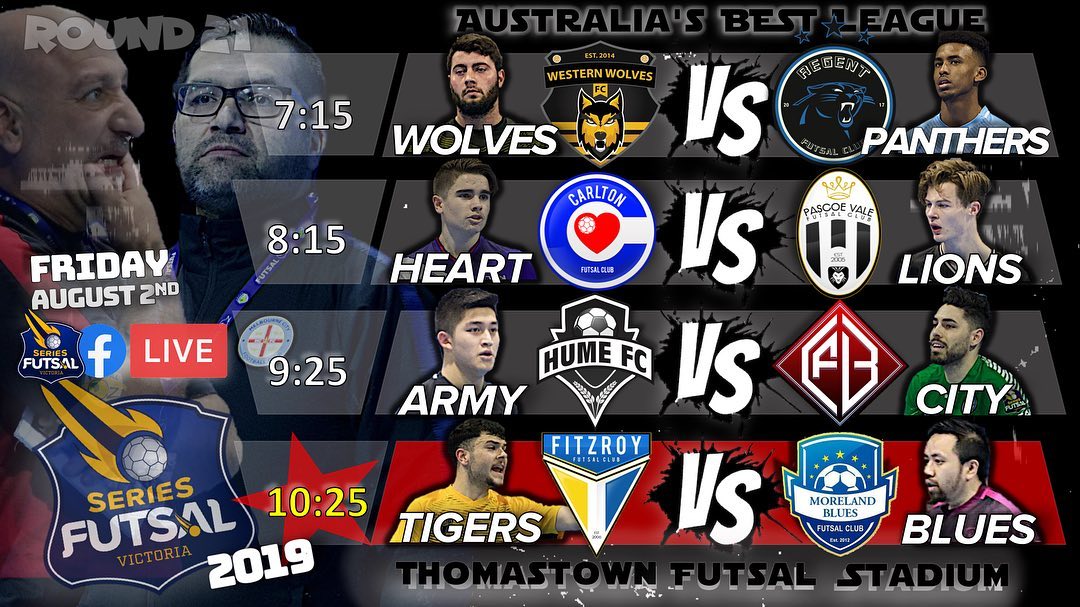 Our first relegation battle of the night saw the Western Wolves take on the Regent Panthers in a tight clash. Although Wolves came into the game on a solid 21 points, if they had lost they still could have been in contention of relegation depending on the Carlton/Pascoe Vale fixture.

The first half was as tight as expected with both teams in need of the win to attempt to remain the Series Futsal Victoria division. The match began with Kevin Lam for Regent scoring a well-placed bottom corner strike to loud cheers from his teammates and coach. Wolves’ attacked and searched for an equaliser for quite some time and finally got through marksman Lokman Ramadan’s superb flick and volley. Late in the half, Ubeyde Cicek blasted home a fantastic strike to take the lead for the Western Wolves.

The second half began much like the first with both teams determined to avoid relegation. The majority of the half saw Regent consistently hold possession and attack as Wolves relentlessly counter attacked with pace. A strike from Regent’s Joaquin Jimenez deflecting off of Abdizirak Ahmed saw itself as the equaliser for the panthers , but it wouldn’t last long as Mohammad Rahimi’s strike would put his side back in the lead. Late in the half Jimenez would bring Regent back in the game with a well-placed strike, which allowed this game to be decided in penalties.

In easily the best penalty shootout this league has seen in weeks, it was Regent who are guaranteed to remain in Series Futsal Victoria for another season. Goals from Ubeyde Cicek, Tarek Zoubir, Michael Nguyen, Shifa Ahmed and finally Shaf Ibrahim would all combine for a fantastic shootout filled with plenty of emotions.

Pascoe Vale looked to get back to winning ways to finish their season positively in a must-win game for Carlton Heart as they were desperate to avoid relegation.

With nothing to play for as they safely sit in third, Pascoe Vale had no remorse when taking it to Carlton Heart in the first half. Jake Besenyi scored early and it only motivated his side further as they got their second through Sinan Gluhak. A well-timed through-ball from Mauricio Novak to Andre Caro lead to their third goal as Caro slotted home a nicely placed finish. The first half ended 3-0 in favour of Pascoe Vale.

Besenyi may have had a goal to his name already entering the second half, but a combination of great position, awareness and finishing would allow him to collect another whopping four goals to his name finishing with five. His goals all game from close range thanks to help from teammates being able to find him in the correct position. Nathaniel Turner also got on the scoresheet for Pascoe Vale with a tap-in whilst Hayden Kanjo and Chaaban Rajab were able to score consolation goals for Carlton.

In what should have been another relegation battle for the night, Hume and Brunswick faced off in a fixture to determine the last and second last place due to their largely negative goal differences.
The scoreline of this match wasn’t as high as the one previous, with both teams struggling to find the back of the net in both halves. A goal from Michele Salvi followed by passionate celebrations and one from Behrad Behzadpour meant both teams were entering the second half level at 1-1.

The second half provided more goals and a higher intensity as both teams kicked into a higher gear to take the three points and the bragging rights. Nejdett Sahin opened the half with a great top corner strike to put his team in the lead, only to get another one soon after to make his brace. Michele Salvi gave his side a lifeline, but it was Behzadpour with a goal to make his brace as he scored a well-taken goal to see out the game. Giovanny Garcia offered a consolation goal but it wasn’t enough as Hume finish the season off on a high note.

Undoubtedly our match of the night, Moreland take on Fitzroy in a match to determine this seasons Series Futsal Victoria champions. Moreland enter the game in need of a win resembling a 3-goal margin in order to overtake Fitzroy at the top spot.

Our first half was exactly what was expected with both teams desperately fighting for this seasons title. It was Fitzroy who played more convincingly though, as they got off to a 1-0 lead early to a Fernando De Moraes tap-in from close range. His lap around the court in celebration was a highlight of the match as he drew first blood for the league leaders. The young Jackson Shaw would then get his name on the scoresheet with an emphatic bottom cornered strike, only to score a follow-up goal immediately to get his brace. His celebration resembled shock as he basically makes it impossible for his team to lose the title race, as at this point Moreland were in need of 6 goals without conceding to redeem themselves.

The second half saw further domination from the inevitable winners as they opened the half with a goal from Jose Filho. The crowd was wild and having a fantastic time as they cheered for their favourite players to take the field. The energy was only fuelled further when Cosimo Russo finished two open nets as Moreland’s goalkeeper was away from his goals, attempting to help his side create more chances to get back in the game. Harry Robotis and Elias Parthimos both got on the court and the scoresheet with cheers from the crowd following their strikes. Moreland got three goals through Dean Lockhart, Atay Ibrahim and Muhammed Temel but they weren’t enough as Fitzroy were crowned champions.