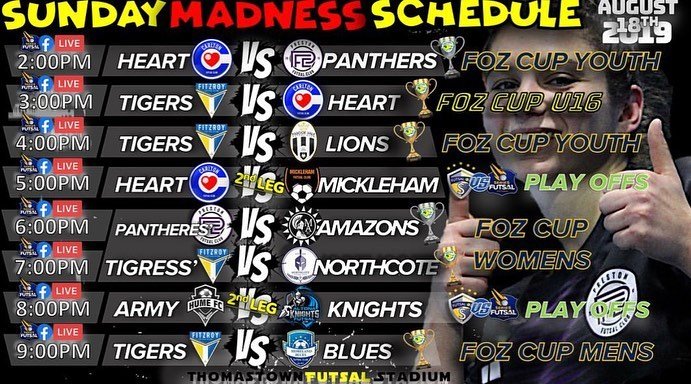 Our first match of our Super Sunday was a battle for Futsal Oz Youth Silver Cup. The match originally had the Preston Youth to take on Metropolitan Youth, but due to a forfeit from Metropolitan, Carlton Heart Youth were substituted in for our opener.

The action kicked off with James Ignatidis taking the lead for Preston as he walked the ball in with ease following a shot deflecting off the post. Later on Thomas Natoli would double the lead with a greatly taken volley from close range, all the shot took was the slightest of touches to steer the ball into the net. Both Ignatidis and Natoli finished the half with a brace each following a goal each. An own goal for Carlton in the dying seconds allowed for the trailers to enter the second half with some hope.

The second half kicked off with more goals as Jackson Georgi got his name on the scoresheet with a beautifully taken strike from distance. Ali Atosh got his brace as he scored his first and second of the game after causing the own goal in the first half with his heavily deflected strike. Ignatidis and Natoli completed their hatricks to finish off the game and the season for the FC Preston Youth side.

Our next game of the evening was our Futsal Oz Under 16s clash as Fitzroy and Carlton Heart battled it out for their respective Futsal Oz Cup.

Our first half was goals galore for Fitzroy as they managed to put a staggering nine past the Carlton Heart. Goals came from Loukman Khodr and Abed Chandab aswell as a hattrick each from Hamza Soueid and Elias Parthimos. It was all Fitzroy although Carlton managed to get an early goal through Noah Husseni to give them hope but it wasn’t enough as Fitzroy played their game with comfort and style.

The second half wasn’t as eventful as the first, but the domination did continue with Fitzroy getting four more goals as Muhammad Mustapha and Harry Robotis got their first of the game whilst Chandab completed his hattrick and Soueid got his fourth.

It was our third fixture of the night and it was time for our Youth Gold Cup match between Fitzroy and Pascoe Vales respective Youth sides to see who would finish the season on the bigger high.

The night of quality futsal continued for Fitzroy as they looked like they would be stamping their thumbprint on yet another trophy for the season. It was recent Moreland signing Cosimo Russo who scored the opener with a powerful volley as he plays his last few games for his beloved Fitzroy. A howler of an own goal from Moe Feteiha doubled the lead and a brace from Tal Galper and goals from Scott Rogan and meant the leaders were taking it to Pascoe Vale 6-0. A late Gerardo Soto goal for Pascoe Vale offered consolation but it would be a difficult task for PVA to get something out of this game.

The action slowed down in the second half as the game was seemingly over for Pascoe Vale. Fitzroy continued to dominate as Russo scored another two to complete his hattrick. The match finish at 8-1 with Fitzroy taking home yet another trophy for the season.

Our first Series Futsal Victoria playoff of the night saw Carlton fight to redeem the one-goal deficit provided by Mickleham in the first leg in a heated battle.

The first half was a great watch for any spectator in attendance as both fought desperately to play in Series Futsal Victoria next season. The match began at 5-6 and Carlton exploded with energy at the beginning as Hayden Kanjo proved it with a header to bring it level. Not long after, a deflected strike from Abdirizak Ahmed allowed Kanjo to get his brace as he walked the ball into the back of the net. The first half finished with two goals to Carlton’s name and the aggregate scores at 7-6 to Carlton.

In one of the most intense games of Series Futsal this season, it’s Carlton who remain in Series Futsal Victoria for another season as they disposed of a determined and reluctant Mickleham FC. Both sides provided a match of the season candidate as they threw everything they had for the victory. Anthony Boras opened the half with a nicely taken goal, but it was Rico Hauser who makes his mark on this fixture much like the first leg, scoring a wonderful brace. Boras followed this with his own brace, but Hayden Kanjo responded with a shot deflecting of him into the goals for him to claim his hattrick. Adrian Dobraszkiewicz scored for Mickleham to give his side hope, and it was a Tony Stalevski penalty that would equalise the match at 10-10 to force it into extra time. Mickleham’s tank was clearly running empty, as Stephen Gustus scored a brace of close ranged goals followed by the roars of teammates and crowd members. Chaaban Rajab closed the game with a well-taken finish to make his mark and claim the man of the match award.

Our fifth match of our Super Sunday was our first womens fixture of the night, where Preston FC took on the Melbourne Amazons for the Womens Silver Cup.

It was a close affair from the beginning for this one as both sides fought hard and fast for the win. It was Mariella Bagang who gave first blood when she slotted home a goal with a smile as she took the lead for her side. Preston kept their heads up and didn’t slow down though, as Taylor Halabi equalised not long later with a well-take close ranged goal. Amazons proved their quality though as they quickly struck back in the lead through Bianca Lee but it was Giuliana Pavia who equalised for Preston, taking this affair into the second half as a draw.

The second half was just as close as the first, with both sides struggling to score against each-others solid defences. Multiple close chances from each side had spectators second-guessing their predictions for the entirety of the match, but it was Elizabeth Eyar’s powerful strike that separated the sides. Eyar ran the show as she put on a dominating display, only to top it off with a fabulous goal to win the Silver Cup for Preston FC.

One of our last few matches of the night saw the Fitzroy FC take on the Northcote FC for the Womens Gold Cup.

This was a clash of the titans-resembling fixture as these two can easily be classified as the two top women’s teams in the competition. Northcote’s Mary Hubeek proved the quality of her side as she buried a wonderfully taken goal from distance to open the lead for her side. Fitzroy fought as both sides put on a skilful display and ultimately scored an equaliser through Georgia Cawley after a fantastic build-up play and finish.  Ebru Efe and Elaina Vatcky both finished their own respective close-ranged goals to take the lead for the tigers and close the half on a high note at 3-1.

The second half saw the tables turn as Northcote showed their determination when bringing the game back from 3-1 to 4-3 in their favour. A great goal from the right-wing from Melissa Garcia gave them hope, and an identical finish from Monica Fonua equalised and brought the game back for them. After minutes upon minutes of both sides fighting for a decisive goal, Eleni Fakos would take the lead emphatically. Northcote looked like they were preparing for victory, all until Fitzroys Emily Coppock made her mark on the score sheet finishing a powerful strike to equalise at 4-4. After two halves of extra time the score remained level and we had our first penalty shootout of the night.

It was a shootout dominated by goals as both sides scored all their penalties but one in Northcotes Hubeek. This meant that Fitzroy claim yet another trophy for the season and continue to dominate Series Futsal.

Our second last game of the night was a challenge for Hume as they looked to overcome a five goal deficit in their Series Futsal Playoff Second Leg fixture against Altona.

The first half only piled on the misery further for Hume as they looked closer and closer at an inevitable relegation. A goal each for Altona’s Mark Saric and Jayden Merceica meant the aggregate score was then 4-11, leaving Hume almost hopeless for the second half.

Although the winner was clearly to be Alton, Hume refused to lie down and take the loss as they fought for their dignity, and maybe even a miracle as they were in need of seven goals to catch up to their opponents. They managed to get consolation goals through Andres Delgado and Behrad Behzadpour but they were ultimately irrelevant as Jayden Merceica completed his brace and Durim Cura finished the game off for his side as they got promoted to Series Futsal Victoria.

Our final game of our Super Sunday was fittingly the grand final of the Futsal Oz Cup between the top two teams in Series Futsal Victoria at the moment, Fitzroy and Moreland.

This was looking to be an extraordinary match as the spectators piled in to see two titans clash heads. An early goal from young starlet Jackson Shaw saw the stadium erupt as celebratory roars filled the building. Cosimo Russo was playing his last game for his club and was on the ball as he scored two well-taken goals to make the lead 3-0. The first was a close ranged strike nutmegging the Moreland goalkeeper and the second was a distanced volley into an open net. Jackson Shaw got his second of the game and was once again supported by emphatic roars of celebration. The first half finished at 4-0 to Fitzroy.

After an intriguing first half, the competition slowed down and turned into a chess game as Moreland attempted to pick apart an airtight Fitzroy defence, whilst utilising the fifth man tactic. Although they moved the ball well, they just didn’t take advantage of their opportunities, and as they watched Jackson Shaw complete his hattrick into an open net, they saw their chances of winning the Futsal Oz Cup crumble to pieces. Jose Filho scored soon after in identical fashion as he passed the ball into an open net, and followed it up with an emotional celebration. He completed his brace with seconds to go and celebrated with a smile. The match finished at 7-0 with Fitzroy convincingly and impressively disposing of a star-studded Moreland FC.