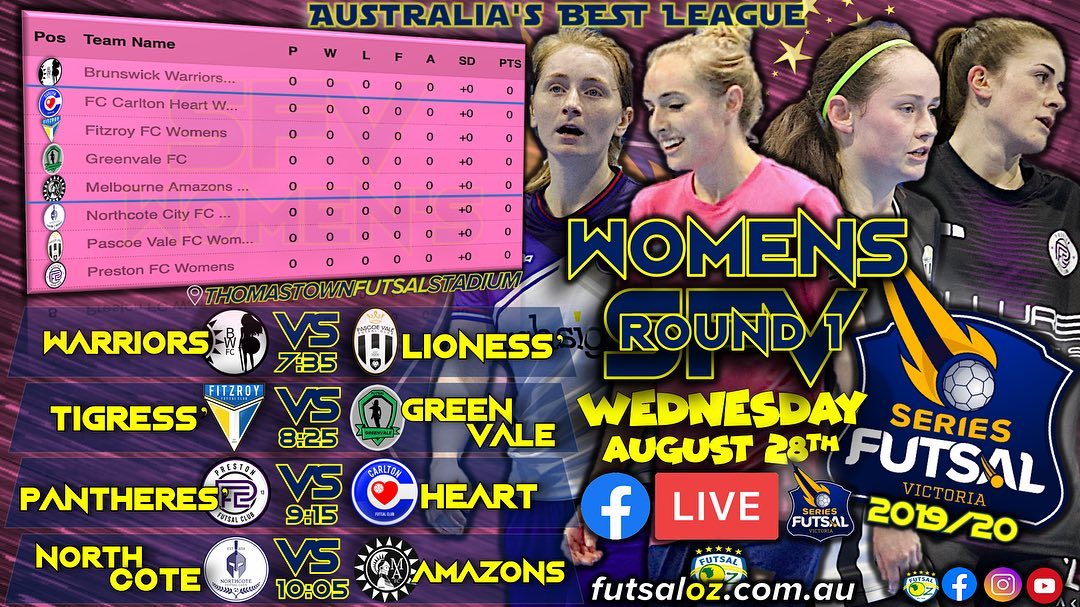 The opening game of the 2019/20 season saw a new look Brunswick Warriors take on last seasons runners up Pascoe Vale. After a tight opening to the contest it was Brunswick to drew first blood as Pam Demetriou opened the scoring for the Warriors, before Demetriou struck again to double her sides advantage. A penalty went the way of Pascoe Vale, which Abbey Flight stepped up and converted to keep her side in the contest at the break.

The second half saw a similar star to the first as both sides had chances and the next goal was crucial, it went the way of Brunswick as Demetriou scrambled home her hat trick to restore the two goal cushion, before Daniella Galluccio got her first goal for Brunswick to all but kill off the game. A late goal to Demetriou saw her end the game with a game high four goals, as Brunswick signal their intent early on in the season while Pascoe will look to bounce back.

Next up saw defending Champions Fitzroy take on Greenvale. A tight start to this one saw both sides have their chances but it was Fitzroy who took advantage and opened the scoring through Em Coppock to give her side the lead. The lead was doubled shortly after when Stef Oddo found the net, before the floodgates opened as Coppock ended the half with four to her name and debutant Deanna Fruscalzo got herself a goal to see the Tigeress’ go into the break with a six-nil lead.

The second half saw Fitzroy not find the net as many times and Greenvale unlucky to to have a couple of goals for their troubles , with Coppock ending the game with a game high six goals to lead Fitzroy to a first up win as they look to defend their title.

Next up was the game of the night as Preston took on Carlton with both sides looking to start their season with a win. Preston raced out of the blocks as they took the lead through Sidney Allen, though it didn’t last long as Rebecca Davies fired a strike that was too hot to handle to restore parody. Preston again went ahead through a thunderbolt strike from Allen, before striking four unanswered goals with Steph Galea bagging a brace supported by singles to Elizabeth Eyar & Taylor Halabi had Preston 6-1 ahead and dominating proceedings. Carlton would pull a goal back through Davies before the break to keep their chance of a come back alive.

Try as they might, their slow start would cost the Heart as they matched Preston in the second half but could not claw back the deficit as Halabi completed a brace and Armina Sherifi also got on the scoresheet to ensure goals from Alyson Pym & Zoe Tizard would not be enough as Preston firm as an early title favourite for the 2019/20 season.

The final game of the evening saw title chasers Northcote take on a Melbourne Amazons side looking to improve on their sixth placed finish. The early exchanges were an arm wrestle with neither side finding the net in the opening ten minutes, but it was the more experienced Northcote that took the lead through. thunderbolt from Camila Fresneda off the crossbar and in for the lead. Before the break, City would double their advantage through Mary Hubeek to go into the break two up.

The second half saw Northcote dominate the possession for the majority of the encounter and it wasn’t until one minute to play that Northcote iced the game as Fresneda finished off her second of the contest to get Northcote off to the perfect start, while the Amazons can take positives from their performance.