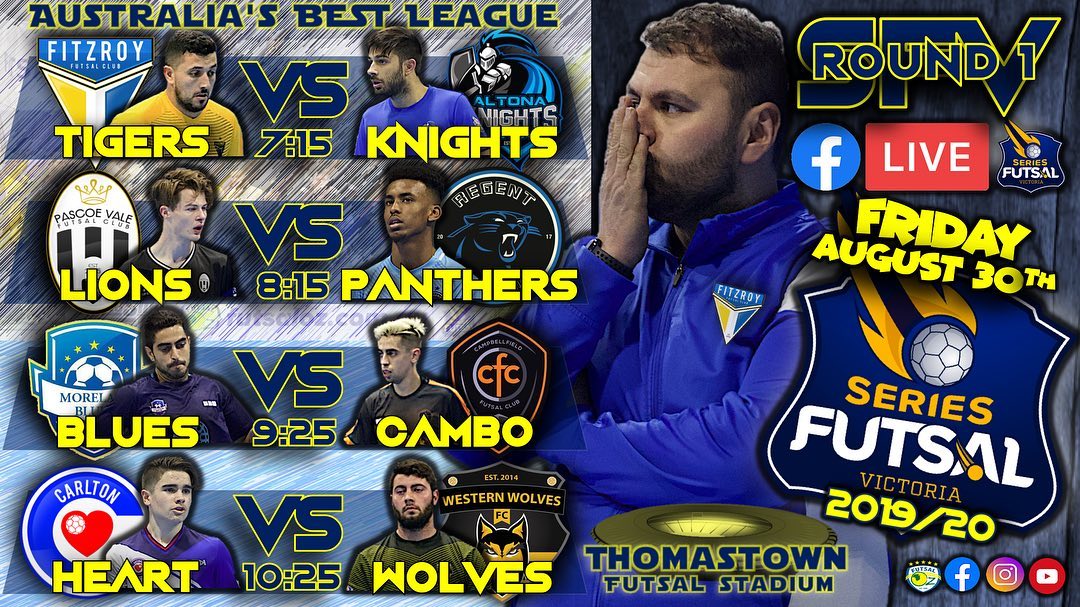 It was our return to Series Futsal and what a match it was to kick us off, as the dominant champions Fitzroy faced off against the hungry Altona in what was sure to be a classic. Fans were wondering how Fitzroy would cope with star-players Jose Filho and Cosimo Russo transferred out.

The first half was a game between goalkeepers as both sides relied on the superb talents of Peter Tamburrino and Frano Saric. It was Fitzroy that dominated the possession and shots though as the game was the ball travelled predominantly in Fitzroys favour, as Altona relied strictly on pacey counterattacks. The half ended at 0-0 but was highly entertaining as we wondered who would take the three points in this affair.

The second half provided a similar showing as both goalkeepers showed their talents, but it was Tal Galper who finally scored first blood with a top right corner strike. Fittingly, it was Tamburrino who joined him in celebration first. Both sides continue to strike the ball, but it was Altona who was really beginning to find their groove in the second half as they continued to test Fitzroys defensive resiliency. Eventually, the consistent pressure lead to a Harry Hillary-Jenkins equaliser, with celebrations erupting. Tensions heightened and tempers flared as the two teams became frustrated with each other, and the referees. A red card was given to Nicholas Jurcic and multiple warnings were provided as this match went to penalties.

The penalty shootout saw Scott Rogan and Luke Jurcic score for their respective clubs, but fittingly it was man of the match Frano Saric who scored the winner for the underdogs as they toppled the champions.

Our second fixture of the night saw Pascoe Vale take on Regent in a clash that was sure to see goals. Attention were on PVA’s Aaron Yu and Regent’s Jason Barrientos as the two inter-league transfers debuted for their respective clubs.

The first half was a tight affair as both sides had their chances from close and far range, but it was a magnificent strike from youngster Mubarak Ahmed that broke the deadlock. The ball was struck from an extremely tight angle on the right wing and almost broke the side netting, the crowd loved it. It didn’t take long for Pascoe Vale to respond though as Joao Da Silva scored from close range to equalise. Later in the half Jake Besenyi stole the lead with a nicely taken strike, and almost got his brace with under a minute to go, but it was an extremely controversial handball from goalkeeper Samatar Yusuf that kept the one goal deficit.

We entered the second half with plenty of intrigue due to the actions that transpired in the conclusion of the first, and it was Mauricio Novak who furthered his sides lead with a well-taken bottom corner finish. Besenyi followed up with a goal for himself later in the half, but it was countered by Regent’s Ismael Mohamed. The game was successfully seen out by Pascoe Vale thanks to the non-stop pressure from Kevin Dos Santos and great defensive efforts from Tyler Garner.

What was set out to be our potential match of the night saw a star-studded Moreland side take on a massively motived Campbellfield. The fixture was littered with highly regarded debutants, including last season’s MVP and Golden Boot winner Cosimo Russo.

The match opened with an immediate goal from Atay Ibrahim, who found the top corner with a brilliantly placed strike on a tight angle. Adam Cooper followed this up with a fantastic strike making theis fixture must-see. Chabaani closed the gap with a well-taken strike, but it was Kazuhide Hirose that got the hold of the game for Moreland once again. The match remained at this scoreline for the majority of the rest of the half, until star-player Henrique Pimenta made his mark on the game scoring a quality goal to lower the deficit to one as we entered the second half.

The second half provided easily the best half of futsal we saw all night with both sides throwing absolutely everything into their games. All eyes were on Danny Chabaani, Herique Pimenta and Adam Cooper as they dominated the narrative of the match. Cooper scored powerfully to further his sides lead, but it was a brace from Chabaani (to make his hattrick) and a goal from Henrique Pimenta that put Campbellfield in the lead at 5-4. Cooper then scored to equalise for Moreland but would soon see himself put the ball in his own net to allow the opposition back in the lead. Ibrahim would close the game off with a wonderful strike as he did well to stay on his feet, find the bottom corner and equalise for his side to take this game into penalties.

Ubeyde Cicek and Atay Ibrahim both scored their penalties for their respective sides, but it was a quality penalty that topped off a fantastic performance from Henrique Pimenta that gave Campbellfield the victory.

Our last match of the night saw two sides determined to redeem themselves after lack lustre seasons finishing in the bottom half of the table. It was Carlton Heart taking on Western Wolves in another clash showcasing plenty more high calibre debutants.

The match kicked off with an injury to Carltons Fodi Karatzas forcing them to replace him with David Barra who made a number of crucial saves throughout the match. Billy Atik countered it for the Wolves though with some save of the season candidates already. Double saves and even triple saves from Atik saw players dumbfounded by his efforts throughout this game, but it didn’t mean that Carlton weren’t scoring as Joshua Pulvirenti scored the opener with a scooped chip. Jose Filho equalised though with a low driven strike. Chaaban Rajab got his side back in the lead with a shot struck straight into the upper-right corner to close the half.

Our last half of Series Futsal for the night was a clinic by Carlton as they dominated the scoreline only conceding two more goals and scoring four. Connor Irwin stole the show earlier with a fantastically taken solo goal and great run/assist for Abdizirak Ahmed’s goal. Ernie Simsek topped off a fantastic Carlton performance with a brace of well-taken ‘chips’ over the keeper, and it was only Hayden Kanjo and Filho’s goals that stopped this from being a flawless half from Carlton.