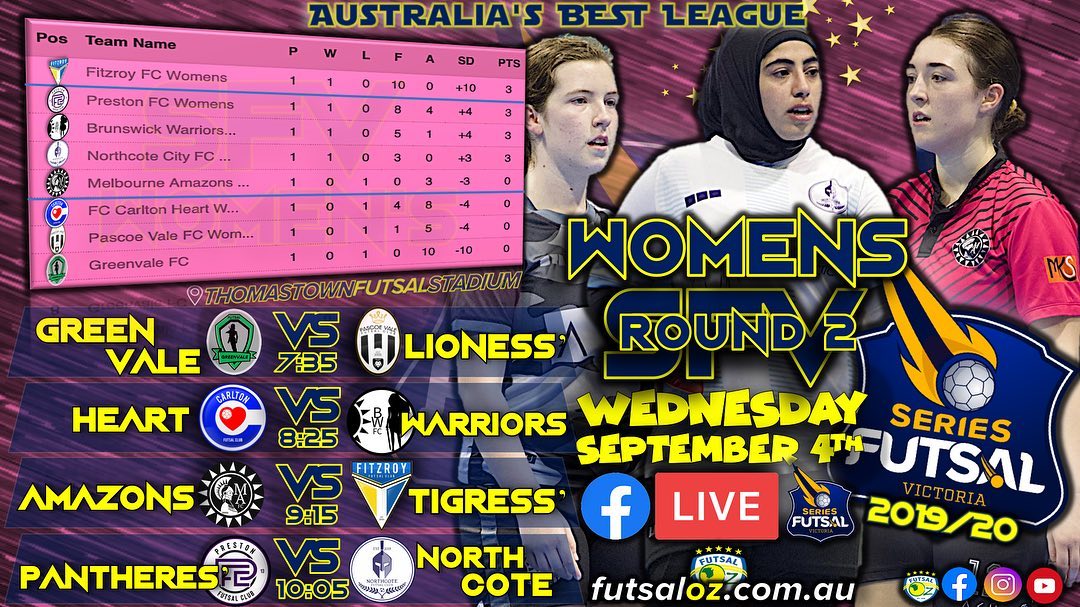 The opening game of round two saw bottom placed Greenvale take on Pascoe Vale who were looking to bounce back from last weeks defeat. The opening half was much tighter than expected as Pascoe went in with a comfortable but not comprehensive 3-1 lead, with goals from Jess Byrne, Jan Mustac & Julie Tran giving Pascoe the edge, while a goal from Madeline Bove kept Greenvale in the contest at the break.

Greenvale put up an all mighty defensive effort in the second half, before letting themselves down in the final three minutes of the half where the Lioness’ piled on four unanswered goals with Jan Mustac and Julie Tran completing braces, while Evangelia Parthimos & Bruna Silva both chimed in with goals of their own to see Pascoe record their first win of the season.

Next up saw Carlton who were looking for their first win of the season, take on a new look Brunswick Warriors who were sure to be fighting for the title. It was the Warriors who got the opening goal through Daniella Galluccio to give her side the lead, only for Carlton to hit back through Katrina Tsalikidis to have the sides level at the half time break.

The second half saw a tight contest that saw both sides have their chances, but it was the Warriors who were the moire clinical of the two as Galluccio netted twice more to complete her hat trick and and seal a hard fought win for the Warriors as they remain unbeaten.

Next up saw Melbourne Amazons take on defending Champions Fitzroy in what was a hotly contested clash. Amazons had gained some confidence after pushing Northcote all the way last week and got off to a good start in this one with Mariella Bagang finding the net after intercepting a pass to give her side a dream start. It was soon two as a lovely bit of play from the Amazons saw Monique Kolyvas find the net ti double their advantage. The Amazons looked in the mood and were one fire as Kolyvas got herself a second to have her side three up and leave the defending champions shell shocked. The Tigeress’ pulled a goal back before the break as Claudia Fruscalzo cut a ball back for Em Coppock who finished it off to keeper her side in the contest at the break.

Early in the second half, Fitzroy were back within a goal as a long throw found the head of Coppock who turned it home with her head for her second of the contest. Fitzroy were then level as a corner was finished off by Stef Oddo to tie the game at three. After letting the lead slip, the Amazons weren’t about to go away as they regained their advantage through new signing Zoe Schaffner, but it lasted just a matter of moments as Fruscalzo picked out the top corner at the other end to tie the game at four. Fitzroy then hit the front for the first time on the night as Deanna Fruscalzo picked out Stacey Papadopoulos who put her side ahead. The Amazons were determined to take down one of the title favourites though and again pulled level through a stunning long range effort from Schaffner levelling the game at five with not long left on the clock. It wasn’t to be the fairytale finish the Amazons had hoped for as Claudia Fruscalzo netted a late winner to see Fitzroy get themselves out of jail and the Amazons send a message to the league, they would be no pushover this season.

The final game of the evening saw Preston and Northcote resume their friendly rivalry as they closed out the evening with what was on paper, the game of the night. In what was a close opening to the game, the first half saw just one goal as Camilla Fresneda found the to give her side the lead, which they carried into the half time break.

The second half saw both sides have their chances, though Northcote had more chances that they failed to convert and were punished late on as Steph Galea found the net to equalise for her side and send the game into a penalty shootout.

Once again it wasn’t to be for Preston in the shootout as they missed all three of their penalties, all saved by the brilliant Iesha Atik, before Camilla Fresneda put her penalty away to seal a hard fought win for Northcote and keep them unbeaten.