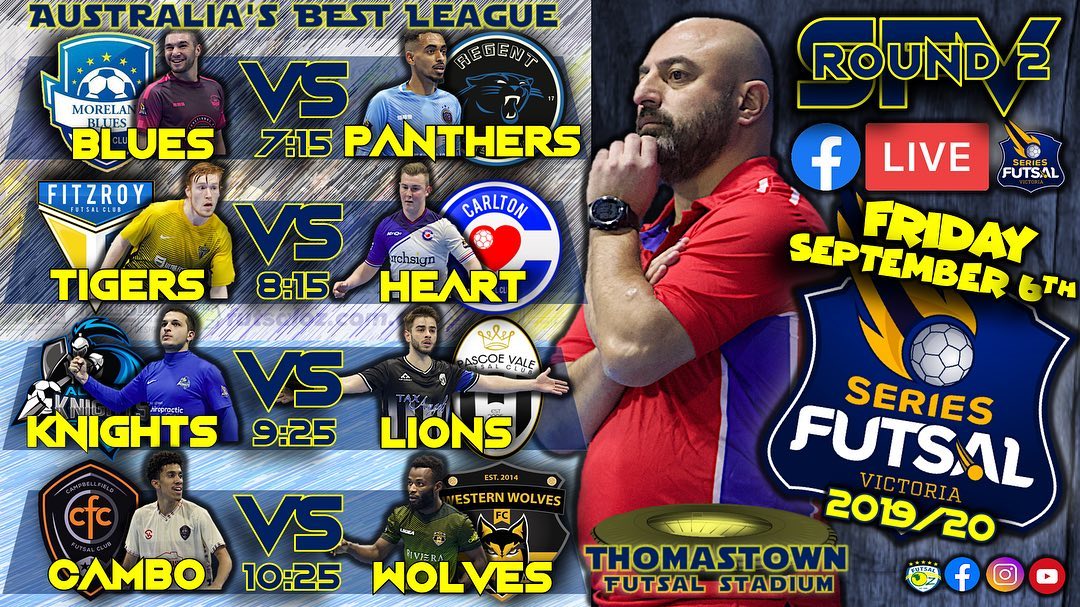 Our first fixture of the night saw two determined teams in Moreland and Regent both looking to bounce back of last week’s losses.

The first half played out much closer than one would anticipate, with Regent having the lead for the majority. Although Atay Ibrahim opened the scores, it was Mubarak Ahmed who equalised for Regent with a confidently taken goal. Osman Ahmed then took the lead for the Panthers as he did very well to stay on his feet and get a nicely placed shot off which was then followed by an Abdulkadir ‘Fundi’ Mohamed strike to stretch the lead further. Rico Hauser was brought on to good effect for the Blues as he scored from close range, and it was a 1-2 between Cosimo Russo and Adam Cooper that allowed Cooper to score and take his side into the second half level.

Our second half saw fantastic scenes as Regent stole the lead back from Moreland with two consecutive early goals through Osman Ahmed and Fundi. The two-goal lead once again wouldn’t last as Hauser snatched his brace to make his hattrick and Adam Cooper scored another to make his brace. It was 6-5 to Moreland with Regent’s crowd making their voices heard louder than ever, and it was a Fundi equaliser and hattrick that truly made the building unglued. The match went to penalties with every shot being lead into with cheers, boos, stomps and claps.

Although this was an incredibly entertaining game, the penalty shootout left much to be desired as Moreland calmly took their first three points of the season through goals from Atay Ibrahim and Cosimo Russo.

Our next fixture was one of our match of the night candidates with the ever-so-hungry Carlton Heart looking to deliver Fitzroy their second loss in two matches.

This match kicked off exactly as it was predicted with both sides competing in an extremely tight 23 minutes. The goal between the sides was from Elias Parthimos who got himself a scrappy goal. The youngster was more than happy to open his bank account for the season as his side entered the second half 1-0.

The second half began just as close as the second, with an early Moe Matar tap-in to double the defending champions lead. After what seemed like an eternity, Carlton Heart finally got there goal after constant frustration through an Arturo Garzon Diaz strike that was fumbled in by goalkeeper Peter Tamburrino. It was 2-1 with both sides struggling to break each other down, until Scott Rogan had his say on the match as he scored two greatly taken goals, one from each wing. It was the Rogan show all game as he dominated the match with his consistent tackling, relentless pressure and

Our third match of the night saw two teams looking to create a streak after last weeks victories with newly promoted Altona Knights taking on the strong Pascoe Vale. The story of the match was Andre Caro’s return to Series Futsal, whilst we wondered if Frano Saric could maintain his match-winning form between the sticks.

The first half saw another game where Altona heavily relied on the heroics of Saric as they continuously saw their defence beaten by the pacey Pascoe Vale. They didn’t lack shots of their own though, with new signing Aaron Yu being forced to make some significant saves. It took an immaculate Joao Da Silva header that divided the sides to finally get a goal passed Saric. The first half ended at a tight 1-0 scoreline.

The second half saw Pascoe Vale really take their chances much more efficiently as they managed a 5-goal divide between the sides by full time. It didn’t seem as if this was going to be the case though, as after Pascoe furthered their lead with a Kevin Dos Santos tap-in, Altona managed to snatch two goals in controversial fashion through Camilo Marin and Kojo Brown.  The game became tighter, which made Pascoe become hungrier as Andre Caro took the game by the throat with an incredible toe-poke into the top left corner to take the lead. Following an outstanding save, Aaron Yu took it upon himself to seal the victory with a court-long strike into an open net to score. Caro, Da Silva and Jake Besenyi all scored to see the game out and get their second victory of the season.

Our last game of the night had everyone talking as the firing Campbellfield took on a Western Wolves filled with new faces.

The first half was action-packed as both sides found themselves getting on the scoresheet, but it was Campbellfield who were the team inform taking four first half goals to their name. It was Jose Filho, Reda Zenfouri and Abdirahman Ahmed who got goals to their names for Wolves, whilst all Campbellfield could provide for themselves was a goal through Michael Nguyen Although there was a three goal deficit, both sides entered the second half as hungry as ever.

The second half saw Wolves only take their lead further through more goals from Filho, Zenfouri and Ahmed again. Wolves were relentless in their pressure, but it didn’t mean that Campbellfield lacked attempts as they tested star goalkeeper Billy Atik plenty of times throughout the game, but other than a second Nguyen goal, they just couldn’t get the better of him.