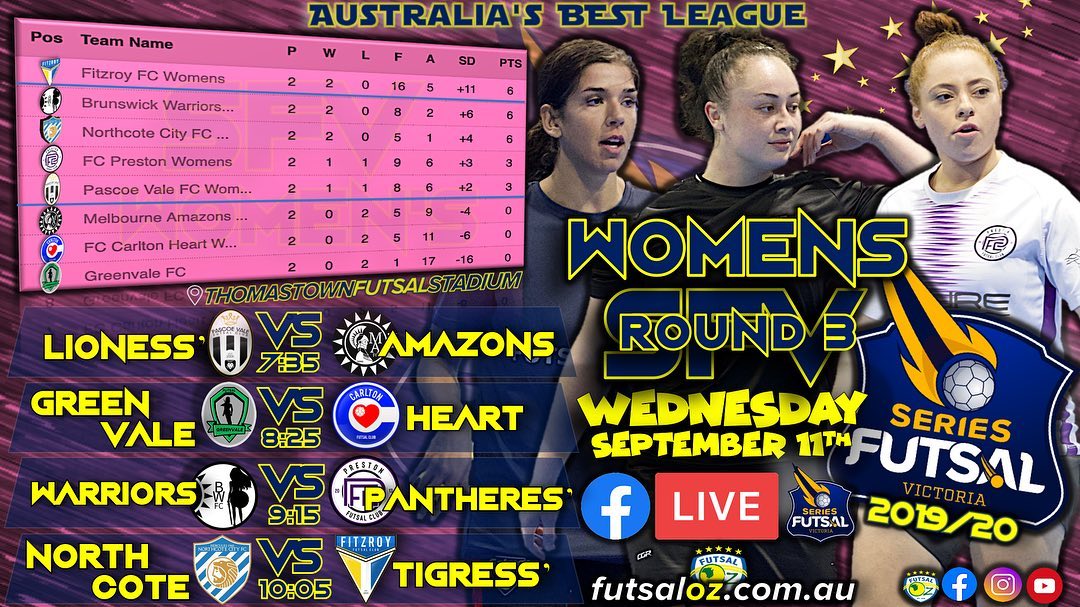 The opening game of the evening saw Pascoe Vale looking to make it two wins on the trot, face a much improved Amazons side who were eager for their first win. Both sides are known for their defensive work and this game started no different as both sides were sitting back and not really creating many clear cut chances, with the only goal of the first half coming from a wonder strike from Bianca Lee as she put a free kick into the top corner to give the Amazons the lead at the half time break.

It was clear early in the second half that some stern words from Lioness’ coach Andre Caro had sparked his team into life with Abbey Flight turning brilliantly and finishing into the bottom corner to level the scores at one, and soon after they were ahead as Bruna Silva bundled the ball home from close range. Pascoe looked too strong and were too convincing with Flight adding a second, supported by an Anita Caro strike to seal a hard fought win for Pascoe Vale.

Next up saw bottom placed Greenvale who were in search of their first win, take on a Carlton side who were surprisingly also winless after two games. The Heart didn’t plan on seeing themselves stay without a win for much longer as they put on a clinical first half display where they piled on seven unanswered goals, with Alyson Pym & Jessica Au both bagging braces, while Katrina Tsalikidis, Rebecca Davies & Savanna Anastasopoulos all found the net for a 7-0 half time lead.

The second half saw Greenvale stem the flow of goals, keeping the Heart to just two, while Greenvale did get on the scoresheet, but it would only be a small consolation as Carlton get their first win of the new season in some style.

Next up saw Brunswick Warriors who were undefeated take on an in form Preston side. In what was a big clash on paper, it was Brunswick who started stronger with Monica Fonua firing home from a turnover to give her side the lead at the break.

Early in the second half Brunswick struck twice in quick succession through two Pam Demetriou strikes for a 3-0 lead. Preston pulled a goal back through Elizabeth Eyar to remain in the contest and despite having a number of chances to get back in the game, it wasn’t to be though as Penny Bakopoulos iced the game, before a late goal to Monica Fonua sealed an important win for Brunswick.

The final game of the night was sure to be a thriller as two sides who always put on a show in Northcote City and Fitzroy locked horns for the first time this season. It was Northcote who came racing out of the blocks as Camilla Fresneda and Mary Hubeek found the net early to open a two goal cushion. Fitzroy were not going to lay down though and pulled the goals back through Nikolina Bucalo and Em Coppock to level the game at two. Fresneda would again find the net for the second time on the night as she restored the City lead, but Fitzroy would again pull level before the break through Claudia Fruscalzo to go into the break locked at three.

Fitzroy opened the second half on the front foot as they won a penalty, which Em Coppock stepped up and converted to take the lead for the first time on the night, before a lovely bit of play saw Fruscalzo net at the back post to open up a two goal cushion. Northcote were not out of the game there as Fresneda completed her hat trick and City were then level again as Mel Garcia headed home to send the game to penalties.