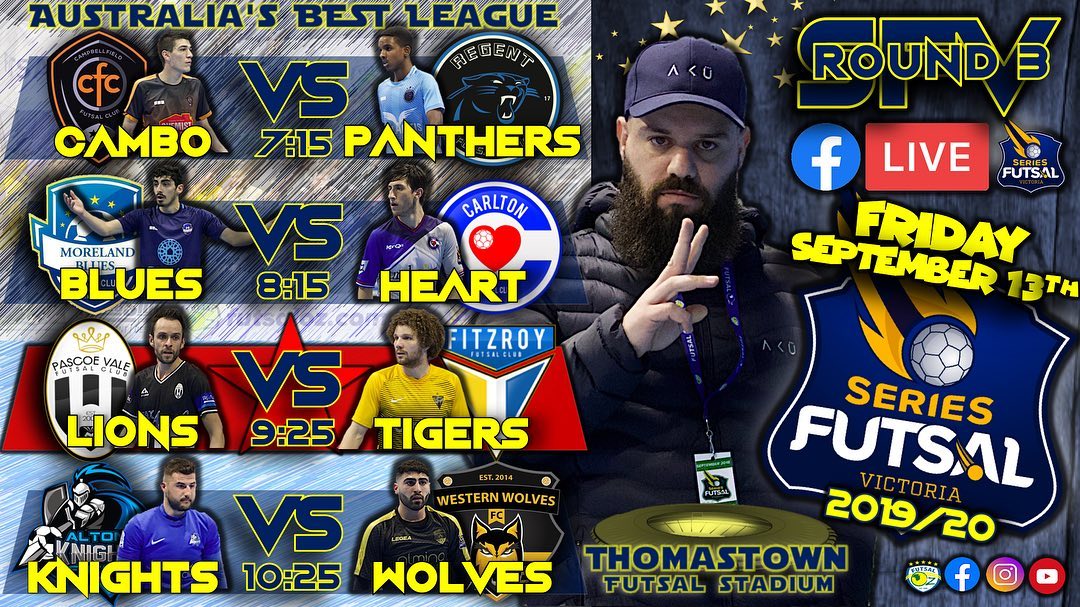 The opening game of round three saw Campbellfield take centre stage as they were looking to bounce back from last weeks defeat when they took on the winless Regent City. Despite not taking a point yet in this season, Regent had a couple of big signings on show that they hoped would change their fortunes. The optimism wouldn’t have lasted very long as Ubeyde Cicek finished off some good work from Brenno Polatti within the opening minutes to give Cambo the lead. Midway through the first half the lead was doubled as Khaled Ayache continues to prove the specialist from free kicks as he picked a gap and fired home low into the net to double his sides advantage. Just minutes before. the break, Cicek recited the ball and turned his player with ease before firing home low past Samatar Yusuf to go into the half time break with a commanding 3-0 lead.

Regent had looked unconvincing to say the least but their start to the second half was much more positive, as a good bit of play saw Shifa Ahmed put through on goal and fire home low into the net to pull within two goals. The game was in the balance for a long period with the next goal crucial, but with 10 minutes to play it was Cambo that got the reward with Henrique Pimenta beating his player and firing an effort which was destined for goal, though touched in at the back post by Michael Nguyen for a 4-1 lead that made it a lot more comfortable for Campbellfield. The game would Melo out from there with not too many more clear cut chances created by either side, until the final fifteen seconds where Shifa Ahmed would put away his second of the game, but it would not be enough as Campbellfield bounced back from last weeks defeat to record their second win of the season, while Regent remain winless.

Next up saw a massive game as a title favourite in Moreland took another who was up there for the top honour in Carlton. It was the Blues who opened the stronger as Muhammed Temel rounded up David Barra and found the net for the lead early. It was two soon after as a side ball found its way to Adam Cooper and he put it past Barra for a two goal lead. Carlton hit back through Dylan Govic who struck from range but Moreland would again find the net through Cooper the creator as he found Cosimo Russo who converted his first goal in Moreland colours to give the Blues a 3-1 lead at half time.

Early in the second half, Carlton stepped up their pressure and pulled a goal back after forcing a turnover which saw Santiago Munevar mark his debut with a goal to cut the deficit to just one, and soon after the Heart were level when Ernie Simsek found Josh Pulvirenti at the back post who tapped it home to bring his side level. Carlton had turned it all around when new signing Moe Matar linked up with Abdirizak Ahmed to finish it off and get himself a debut goal, before Simsek squeezed another home from a tight angle for a 5-3 lead. Moreland hit back through Cooper who lashed home from a side ball but again Carlton netted to extend the deficit as another turnover from the Blues saw Abdirizak Ahmed find the net to again make it two goals, but the Blues were not going away as Temel cut inside and roofed an effort to again bring his side within a goal again, but Matar then netted on the counter attack as he out his side 7-5 ahead. Cooper then squeezed home an effort from a tight angle, and shortly after brought his side level again roofing a side ball to level the game at 7. The Heart weren’t to be denied though as as Chaaban Rajab stood up when it counted most as he rolled Cooper and finished with five seconds on the clock to steal a famous with for the Heart,

The Classico was up next as the only undefeated side left in the league Pascoe Vale up against defending Champions Fitzroy. Early on it was the Tigers who drew first blood as a lovely individual piece of skill from Elias Parthimos saw him beat two players and see his effort bundled over the line to give his side the lead which they carried into the half time break.

Early in the second half a fantastic ball from Scott Rogan found Tal Galper who lashed it home on the turn for a two goal lead. Pascoe Vale were pushing hard to get back into the contest but conceded a ten meter penalty which Adam El Hayek stepped up and put it into the top corner for a three goal advantage. Pascoe then turned to the fifth man tactic and had immediate effect as Kevin Dos Santos tapped home to have Pascoe on the board, and soon after another well worked goal saw Dos Santos tap home for a second time to set up a grand stand finish. It was too little too late for the Lions though as Fitzroy held on for a crucial win to ensure there would be no more undefeated sides in the league.

The final game of the night saw a big rivalry resume as the Altona Knights took on the Western Wolves. A must win game for both, and it was the Wolves who drew first blood as Abdirahman Ahmed finished a one on one chance for the lead, and soon after they doubled the advantage when Hayden Kanjo finished off a lovely ball from Reda Zenfouri to double the Wolves lead. The Wolves were well on their game and made it a three goal advantage when Zenfouri netted to have the Wolves on fire. Altona pulled a goal back before the break as Karrar Hassany netted to keep the Knights in the game.

Early in the second half Altona pulled a goal back as Marin again finished the rebound to get within a goal. The lead was extended when an own goal off Tony Saric gave his side some breathing space, before Altona netted once again as Luke Jurcic squeezed home his effort from a tight angle to keep his side in the contest. Zenfouri again steadied for his side finishing from a tight angle, but the goals kept flowing as Zois Galanopoulos marked his debut with a goal, scoring a free kick from range, but the game was over when the Knights turned to the 5th man but it back fired as Kanjo struck into the open net to seal back to back wins for the Wolves.