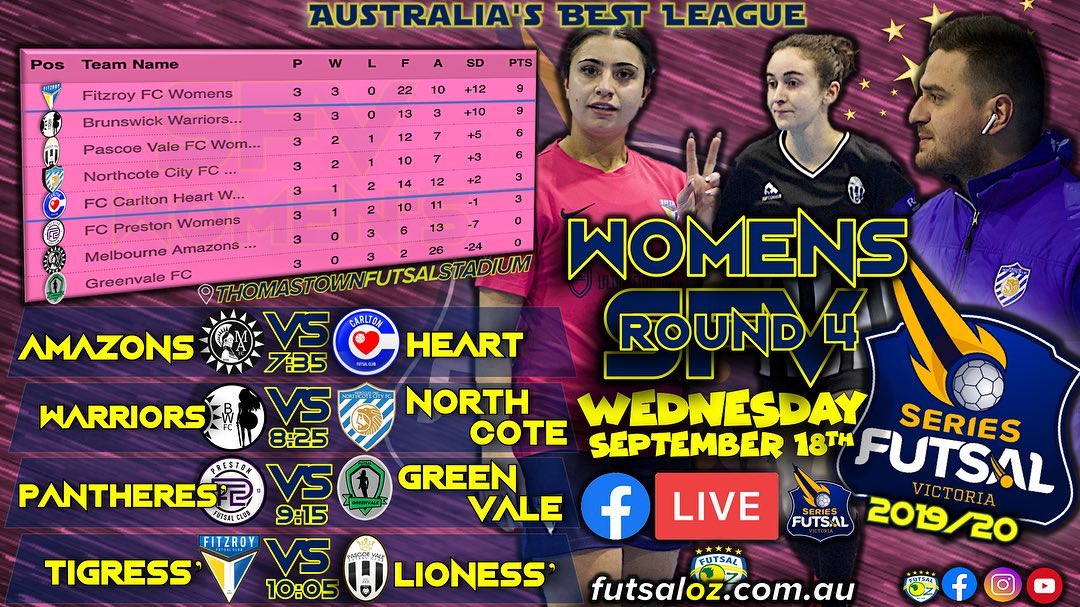 The opening game of the night saw a determined Melbourne Amazons. searching for a giant killing win as they took on Carlton who were eager to continue pushing the top half of the table. Early on the Heart looked in the mood and got themselves a goal through Jessica Au to take an early lead that was crucial for their chances in the game. The advantage was doubled soon after when Katrina Tsalikidis continued her good form, finding the net from distance to make it a two goal lead. Before the break the Amazons were rewarded for the pressure they were putting on the Heart goal with Rachel Grove finding the net to have her side in the contest as the break.

The second half began with Carlton being on the front foot and they made good on their early dominance as Tsalikidis netted for a second time to restore their two goal advantage. Amazons again found the net as they scapped the ball home from a free kick to set up a nervy ending to the game for the Heart, but they managed too hold on as Carlton grab another victory, while the Amazons continue to come close to a big upset win.

The next game on the card was one of the games of the night as undefeated Brunswick Warriors took on a Northcote City side coming off a defeat and in search of a bounce back win.

Next up saw Preston face bottom of the table Greenvale as they continue to push for a top four finish. A strong first half all but put the game beyond doubt as Preston fired home six goals to one with a good spread of goal scores all round to remain in control.

The second half was smooth sailing for Preston as Galea struck twice more to complete a hat trick, while Tayla Halabi added to her first half strike to end with a brace as Preston ran away convincing winners in the end.

The final game of the evening saw the top two sides from last season go head to head as Champions Fitzroy faced last seasons runners up Pascoe Vale. The first half was a tightly contested battle as both sides were defending well and not allowing easy chances on goal as the first half went goalless.

The second half continued the same trend until midway through the until some good work from Ili Jakab set up Deanna Fruscalzo who slotted it home for the opener. Pascoe began to attack more in search of an equaliser as they created a few good chances, but a long ball from Stef Oddo found the head of Nikolina Bucalo who slotted home to seal a hard fought win and see Fitzroy remain unbeaten.