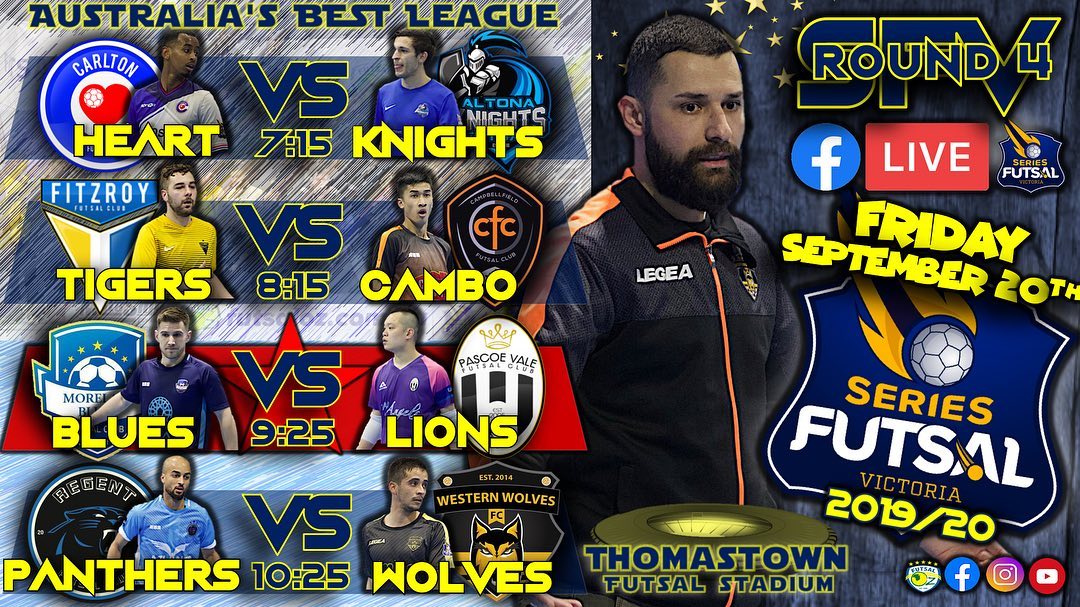 Our first game of the night saw a struggling Altona Knights take on a roaring Carlton Heart after their incredible win last week against Moreland.

Our first half saw sparks as both sides fought for the highly needed three points. The favourites of the fixture though, red hot Carlton took the lead early with Chaaban Rajab side-footing and slotting home another goal for his seasonal tally from close range. Carlton continued to look strong as Arturo Garzon Diaz took the field finishing a tidy goal off of Rajab’s well given assist. Diaz would return the favour late in the half by squaring Rajab just outside the semi-circle who would strike the ball just under the crossbar to score his brace. Abdirizak Ahmed slotted a toepoke off of Rajab’s second assist to make it 4-0 and allow Rajab to finish the half with a contribution to 100% of the goals.

The goals didn’t stop there for Carlton or for Rajab as he netted a second half hattrick to bring his total for the match to 5. Whether it was a tidy finish or powerful long shot, Rajab was deadly. Injury riddled Dylan Govic made his mark on the match aswell scoring a brace to allow this game to finish at 9-0.

Our second fixture of the night was a definite match of the night candidate with the always inform Fitzroy taking on a determined Campbellfield looking to bounce back after last weeks defeat to Western Wolves.

This game was a spectacle from the get-go with Campbellfield taking the early lead from Brenno Polatti’s fantastic bottom-left corner finish. Voices were loud as both sides were doing whatever it took to take the three points. Ubeyde Cicek made his mark on the match early, with a wonderfully placed left-footed shot off of Enrique Pimenta’s layoff.  The game was steady at 2-0 with Fitzroy fighting to get back into the match but it was Cambo who struck again through Daniel Chabaani’s low driven strike from distance which was followed by roars from players and spectators. Fitzroy dominated the second quarter of the match but ultimately couldn’t find their opening goal.

Our second half was a fantastic turn of events with Fitzroy carrying their dominant possession based-skills from the first. It took a few minutes for Fitzroy to finally get their goal from Corey Sewell who had been knocking on the door of a goal all game. His goal came in the form of a rebound volley into an open net. Soon after, Elias Parthimos scored off of Sewell’s corner pass, with Fitzroy relentlessly attacking Campbellfield. Leo Kimpara would shoot from extremely close range and see his shot deflected off Fabio Albuquerque to equalise for the tigers. It was Sewell again who showed up to then give his side the lead with a composed right-footed finish. Cicek decided to take the game by the throat, scoring a hattrick of well-taken goals, with his third being off of a chip from Enrique Pimenta. Pimenta would score in an open net and Elias would get another to his name before this fantastic match would finish 7-5

Our third fixture of the night was also another looking to steal the show as a slow starting Moreland side took on league leaders Pascoe Vale.

The first half may have been a back and forth affair, but it was Pascoe Vale who were the more clinical side, thanks to star goalkeeper Aaron Yu’s efforts though. Moreland were the side with the most dangerous strike attempts, but Pascoe Vale were the side with the goals as Andre Caro found himself shooting home a powerful low-driven long shot. Joao Da Silva then got his brace to continue his scoring form for the season with a bottom corner finish from close range and a volley that had placement written all over it. The half finish 3-0 to the league leaders.

The action continued in the second half as Adam Cooper got his side back in the game with his trademark sideball layoff longshot into the far post bottom corner. Lucas Vaz then got his goal to truly give Moreland hope with a close-ranged finish. It was game on and both sides were gunning for the three points. It was Kevin Dos Santos who rejected Moreland from finding their second win of the season with a well-taken goal followed by loud and passionate celebrations. Although Muhamed Temel scored in an open net to close the gap, it was Yu who showed up once again with an incredible triple save to win the match for his side and remain on top of Series Futsal Victoria.

Our last fixture of the night pitted a struggling Regent against a firing Western Wolves. Regent would search for their first win against their 2nd placed opponents.

The first half saw the favourites fall to Regent’s unpredictability as Joaquin Jimenez opened the scoring early showing great composure. Regent’s consistent counter-attacking futsal lead to a second goal for Regent through Abdulkadir Mohamed which was followed by an eruption of cheers from their ever so passionate spectators. Mubarak Ahmed then furthered the lead with his close-range strike, which also saw loud celebrations. Regent closed the half strong with our third 3-0 halftime lead of the night.

The second half began with a bang as Abdirahman Ahmed and Hanna Shamon gave Western Wolves hope bringing them back into the game with a goal each. Shamon then equalised with an outstanding rabona receiving cheers of respect from the rival crowd. Abdirahman Ahmed then saw his strike deflect off Jimenez into the back of the net to then take the lead. It wasn’t over though, as Osman Ahmed finished an incredibly taken backheel scoop shot to more loud celebrations to equalise. It was then Reda Zenfouri who curled in a top corner longshot to take his side back in the lead, which was followed by another goal from close range to make his brace and widen the deficit. Abdirahman Ahmed then scored to continue stretching the lead, but it was Jimenez and Abdulkadir Ahmed who closed the gap. It all looked said and done until Regent ridiculously found themselves scoring through Osman Ahmed from mere centimeters out with 0.1 seconds to go. The crowd erupted and it felt as if the building would implode as we experienced celebration levels like never before from the Regent crowd. This took the match into penalties.