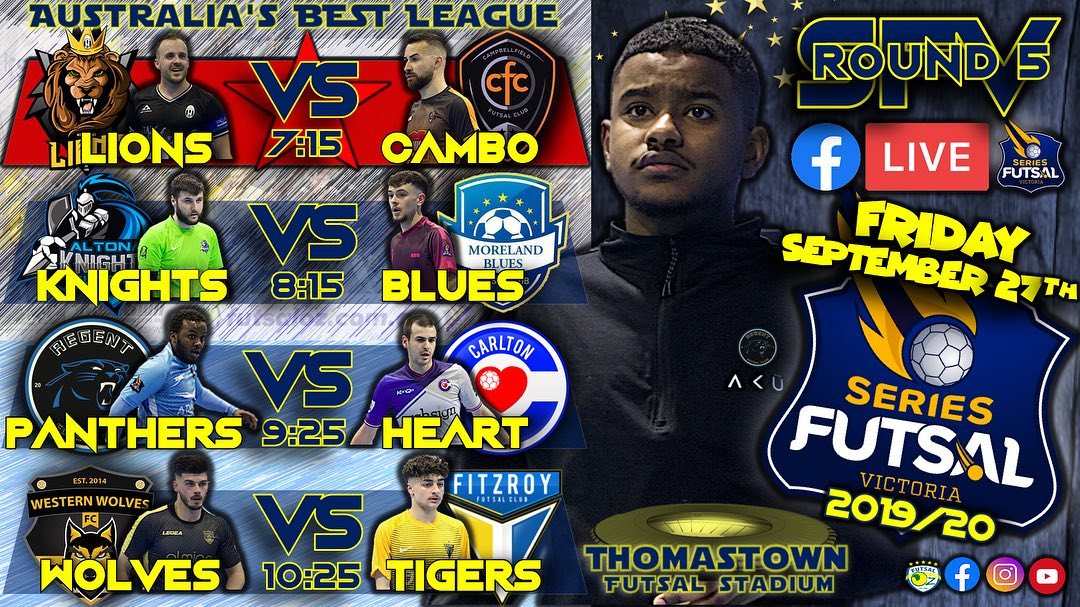 Our first fixture looked to be a potential match of the night candidate as two of the leagues top competitors battled for their fourth win of the season each. It was Pascoe Vale and Campbellfield set to begin our night with a bang.

Our first half offered plenty of entertainment and fantastic futsal as both teams put on a show. We kicked off with strikes to test each respective goalkeeper, but it was Alison Lima De Rosa who scored first blood with a nicely taken 180 degree turn and strike. Nam Pham would score a bullet off of Enrique Pimenta’s assist to equalise soon after. De Rosa would then secure his brace by controversial blocking Anthony Perroudon’s distribution, as the ball rebounded off him and hit the back of the net. Brenno Polatti had his say as he passed the ball into an absent net whilst Felipe Bley was out of his area. It was equal at 2-2 until De ROsa secured his hattrick from a Bley assist, which later would be combined with a Bley goal from a long-ranged toepoke to finish the half at 4-2 to Pascoe Vale.

Our second half saw Pascoe Vale smell blood as they piled the misery onto their opponents as Jake Besenyi scored his first of the night off of a greatly worked Kevin Dos Santos assist. Dos Santos helped another teammate get their first of the game in Mauricio Novak as he made it 6-2. Alejandro Gomez secured his first of the night after a lacklustre first half, and it was Dos Santos who got his deserved goal to complete a fantastic man of the match worthy performance. Ubeyde Cicek scored from close range off of the goalkeeper but it ultimately was meaningless.

Our next fixture of the night appeared on paper to be one-side, so it was up to Altona Knights to prove the pre-match doubters wrong as they took on Moreland.

The match stood at a stand-still for the first quarter as Frano Saric was on fire keeping his side alive. It took several knocks on Altona’s door for Moreland to break through, but it eventually happened as Rico Hauser took to the game and quickly proved to be the difference with a fantastic bottom corner half-volley on the run. Michael Lettini would score a shock equaliser for Altona giving the underdogs a glimmer of hope, but it was Adam Cooper who fired home a near-post strike on the right wing to take back the lead. An Edison Ponari own goal to close the half allowed Moreland sit slightly more comfortably.

The second half began with Nikola Jurcic giving his side all the motivation he could with his first goal of the night, but It was a game of cat and mouse as Atay Ibrahim got on the scoresheet with a well-taken, powerful strike. Muhamed Temel then made his mark with a goal, and Adam Cooper topped off a strong Moreland performance with a strong low-driven goal to make his brace. Despite the heroic efforts of Frano Saric, Altona Knights found themselves on the losing side once again.

Our third game of the night saw league leaders Carlton Heart take on bottom of the ladder Regent in what appeared to be relatively one-sided affair.

Chaaban Rajab took the game by the scruff of the neck from the beginning as he received Abirizak Ahmed’s pass on the right-wing, and confidently struck home the opener. Mubarak Ahmed equalised for Regent, but Joshua Pulvirenti responded with a fantastic turn-and-volley from close range to retake the lead. Rajab would then find himself passing to Pulvirenti infront of goal, but a move of brilliance from the young player saw him dummy the ball past #1 to give Rajab his brace. A low-driven strike from distance saw Rajab secure his hattrick. A goal from Ahmed to compete with Rajab’s was followed by an entertaining celebration for the crowd in attendance who were eating it up. Muhamed Rahimi and Fundi got a goal each to shorten the deficit to 3-5 to Carlton.

Our second half saw a more competitive affair as Regent opened the half with Mubarak Ahmed securing is brace, as teammate Fundi squared a ball across goal allowing an open-netted strike. It was another man of the match performance for Rajab though, for he was having none of it from Regent, as he added another to his tally making it his fourth of the game. Carlton continued to relentlessly hold attack as they eventually found their seventh goal through new signing Moe Matar to close the game.

Our last fixture was another match of the night candidate as the young-gunning reigning champions Fitzroy took on an in-form Wolves side. The narrative of the match involved the debut of star-player Tyler Garner.

This match was hard to predict, and it became even harder when Wolves got an early two-goal lead through a long-distanced toepoke from Jose Filho and a composed close ranged finish from Nikola Velkovski. He wasn’t finished there as Velkovski received the ball just outside the penalty area, took one mere second to make his decision and fire home a very intelligent bottom corner finish to increase their lead. After controversial tackles, fouls and verbal protests from each side, Hayden Kanjo found himself striding powerfully towards goal, beating his man and firing home a great near-post strike to close the half.

Our second half provided mayhem in Thomastown as Corey Sewell brought his side back in the game with a brace of very well-taken strikes past an on-form Billy Atik. Fitzroy were looking stronger than ever as new-boy Tyler Garner received the ball in a dangerous area, and with the world on his shoulders, found the bottom corner to make it 4-3. It was Elias Parthimos who found the back of the net with the free kick that went through Billy Atik and into the back of the net to equalise. Fitzroy fought with more fury then ever as Adam El Hayek demanded the next goal come from him, as he created chance after chance for himself and finally put his side in the lead with a cross-shotted strike. The passionate celebrations lasted so long, as it was Filho who equalised after scoring a controversial penalty. The seconds were counting down and Wolves were attacking relentlessly, until finally with under one second to go, Filho topped off a man of the match performance with a trademark toe-poke above Peter Tamburrino and under the crossbar to win the game. Celebrations filled the building as fans swarmed the court, holding Filho on their shoulders as the clock read 0.5 seconds. A controversial ending saw a ridiculous rollercoaster of emotions persist, making this match a must-see spectacle.