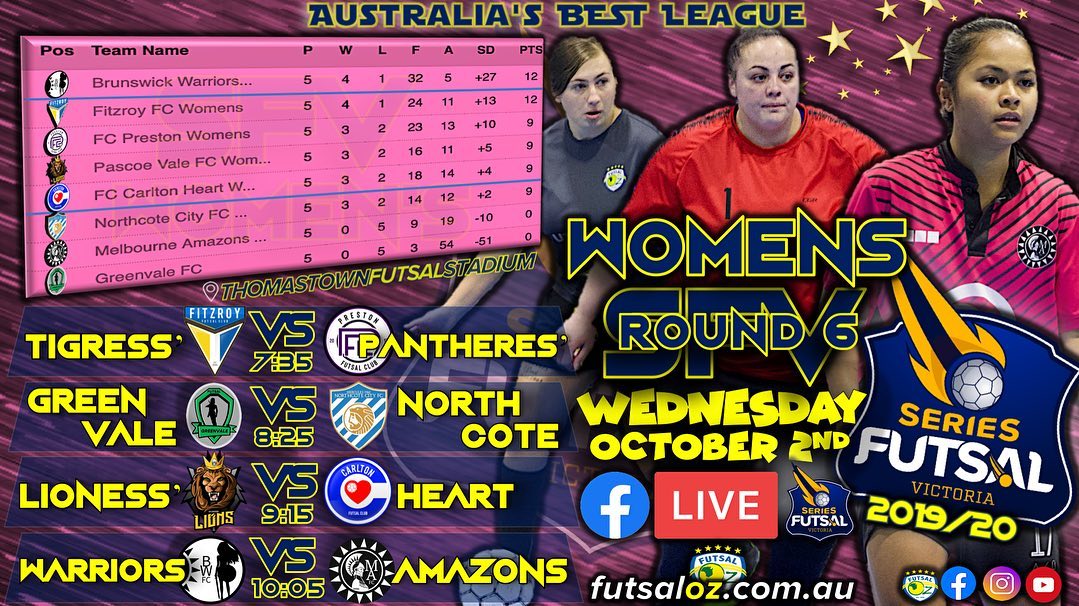 The opening game of the night saw Fitzroy face Preston in what looked like it could be the game of the night. Fitzroy struck early through Em Coppock to take the lead, before Coppock netted again to double her tally. Claudia Fruscalzo then got herself a goal to give Fitzroy a three goal lead, before also getting a second of her own before the break to see Fitzroy going into the break with a handy four goal advantage.

Preston were looking to regroup and started the second half well as they bounced on an error to see Elizabeth Eyar net to keeper he side in with some hope, before Izzy Swift also got herself on the scoresheet to put some pressure on their opponents with eight minutes to play. Coppock would complete a hat trick to steady the ship, before Stacey Papadopoulos squeezed home an effort from a tight angle to restore the four goal cushion. Steph Galea got herself a goal to again keep her side in the contest, but Coppock grabbed a fourth to all but kill off the game. A pair of late goals from Janelle Sammut and a screamer from Galea added some respectability to the score line but it wasn’t enough as Fitzroy return to the winners list.

Next up saw a struggling Greenvale take on title chasers Northcote. In what was expected to be a one sided game, Greenvale took it up to their higher ranked opponents in the opening half as only a Claudia Dimasi strike would give Northcote a slender lead at the half time break.

The second half saw Greenvale lose concentration as Northcote ran out comprehensive winners with Garcia bagging five second half goals in what was a top class performance, supported by a second half brace from Eleni Fakos & a second to Claudia Dimasi rounding out a big win to keep Northcote in the title hunt.

Next up was another entertaining fixture as Pascoe Vale took on Carlton in what is always a tight contest. A tactical start to the game saw both sides implementing their game plans, and it was Pascoe Vale who would make good on theirs with Marcela Marques marked her return to playing with a goal to give her side a lead at the break.

The second half saw the intensity rise and the sides begin to create more chances to score. Both keepers were on their game this evening and it took a piece of brilliance from Jess Byrne to beat her player and cut it back to Marques who turned home her second of the game for a two goal cushion. Carlton continued to battle and got on the score sheet through a Jessica Au strike to set up a grand stand finish, but it wasn’t to be as Pascoe hung on for a crucial victory.

The final game of the night saw Brunswick take on a Melbourne Amazons side who were pushing hard for a big scalp. Brunswick were not about to let themselves be the victims of it though as they piled on five unanswered goals with Monica Fonua completing a first half brace to all but seal the game by the break.

The scoring slowed in the second half but Brunswick were too strong as Monica ended with a game high four goals, while sister Lisa Fonua got two of her own to run out comprehensive winners and remain at the top of the table after six rounds.