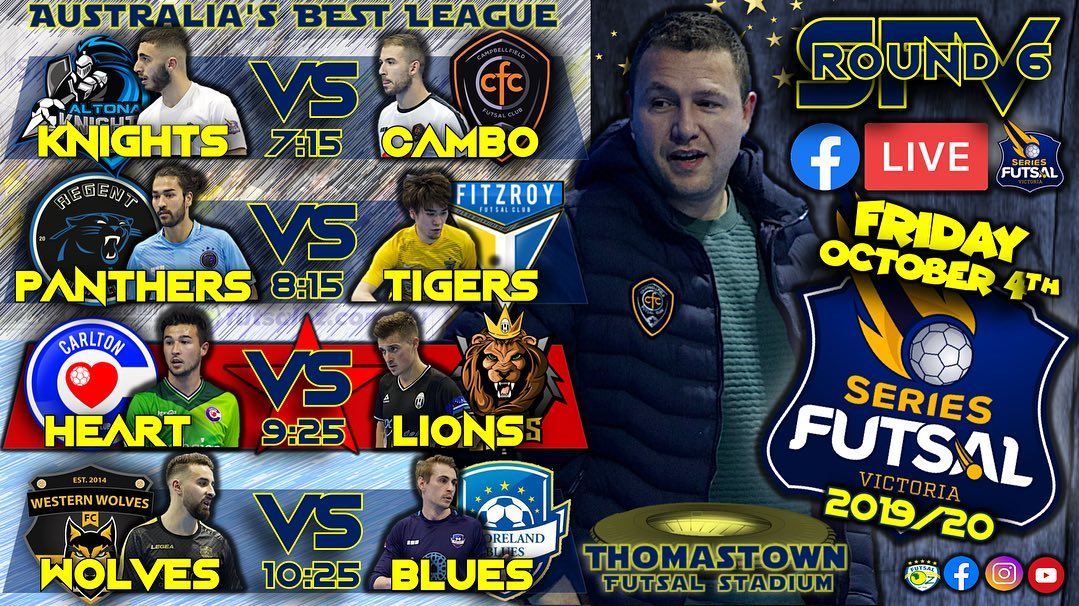 Our first fixture of the night saw the two newly promoted sides Campbellfield and Altona Knights face off in a match with more than just three points on the line.

The match began fiery with the matches intensity resembling that of a rivalry. Campbellfield took the early lead with a goal from marksman Dani Chaabani, who received a pass from a corner and struck the ball low and hard to open the scoring. Both teams were loud in their gameplay with shouts and appeals dominating the narrative and it was Chaabani who added to the drama as Frano Saric came off his line to shoot, only to see his shot blocked and his positioning compromised. Chaabani showed expert composure when curling a strike over Saric and into the back of the net to double the lead.

The second half either saw more attacking precision or less defensive mindsets as both sides managed a number of goals each. The goals began when Ubeyde Cicek scored from close range to further the lead to 3-0, but Altona responded off kick off with Zois Galanopoulos scoring a longshot to close the gap. It was then Thomas Brossard who fired an impressive backheel to increase the lead for Campbellfield. Galanopoulos wasn’t letting this game get away from his side though as he scored with a powerful strike that left the goalkeeper stunned. Campbellfield goalkeeper Anthony Perroudon was red carded due to a handball outside the box, which saw Altona Knights take advantage as Mark Saric fired home his first for the night. Although Cicek scored his brace to make it 6-3, Michael Lettini, Frano Saric and Galanopoulos all scored in quick succession to take this game to penalties.

Althought the second half was a goal-fest, the penalties offered contrast as Galanopoulos topped off a man of the match performance by scoring the only penalty of the shootout to win for Altona Knights FC.

Our next fixture saw dead-last Regent take on reigning champions Fitzroy looking to avenge their last gasp loss to Wolves last round.

The game kicked off aggressively with Fitzroy acquiring 4 fouls in quick succession, meaning they were treading on thin ice for the majority of the half. New-boy Tyler Garner assisted first blood extremely early with Scott Rogan finishing a tap-in off of his pass. Rogan then scored from close range almost immediately after to make it 2-0. Corey Sewell got another goal to his tally for the season with an easily finished strike. Regent weren’t down and out though as Shifa Ahmed scored two very well-taken goals to close the gap, but it was Rogan who got his hatrick after scoring a penalty late in the half.

Much like the first game, the second half saw the trailing team find their inner fight to claw their way back into the game as Shifa Ahmed topped off his hattrick with a goal from close-range. The surge of energy reached Mohamed Rahimi as he scored his first from the night from centimetres out, and it was Osman Ahmed who topped off the comeback and took the lead for Regent with a very well-taken goal from just outside the penalty area. Rogan scored from close-range and confidently celebrated for the opposing fans as he took this game to penalties.

Our second penalty shootout of the night saw man of the match Scott Rogan score first for Fitzroy, followed by Abdulkadir Mohamed scoring the only penalty for Regent as Adam El Hayek won the shootout for the tigers.

Our third fixture was undoubtedly a match of the night candidate as league leaders Carlton faced an inform Pascoe Vale fresh out of dominating Campbellfield in Round 5.

This match was a spectacle from kick-off as Abdirizak Ahmed continued his spectacular form with a header off of Chaaban Rajab’s throw in. Kevin Dos Santos responded soon after with a low-driven strike from distance to equalise. Dylan Govic took to the game after being substituted and quickly made an impact with a goal just outside the penalty area to take the lead. Alejandro Gomez and Andre Caro both scored from close-range to regain the lead, but Moe Matar’s header brought Carlton level again. Abdirizak Ahmed scored a magnificent chip from close range to make his brace, but both sides couldn’t catch a break as Dos Santos assisted Joao Da Silva in equalising for Pascoe Vale to close the half.

The flare and intensity continued to heighten as both sides went all out for the much needed three points. Joao Da Silva gave his side the lead through a tight angled tap-in after taking advantage of Dylan Govic’s red card. Carlton equalised though through Rajab as a mistake at the back from Kevin Dos Santos saw the Carlton marksman score with a slide to equalise. Carlton Heart found themselves taking a free kick just outside the penalty area and scoring through Ernie Simsek to regain the lead once again. Pascoe Vale resorted to using the fifth man tactic and found success through Da Silva from close-range. They received a penalty with under a minute on the clock and it was powerhouse Andre Caro who took the lead and the three points for his beloved Pascoe Vale.

Our last game of the night saw a struggling Moreland take on a Western Wolves side fresh out of their monumental victory over Fitzroy in Round 5.

The first half continued the goal-fest for the night with Wolves opening the score early through the inform Nikole Velkovski from range. Wolves were feeling it as Abdirahman Ahmed provided a wonderstrike from range as his shot saw the ball curl with power into the top right corner. Adam Cooper entered the game as the league’s top scorer and didn’t plan on slowing down as he fired home a brace in quick succession to equalise for his side. Velkovski wasn’t having it though as he fired his second of the game from close-rang to take the lead back. Cosimo Russo broke his duck by scoring a top corner strike with confidence. Lucas Vaz followed this up by exemplifying tremendous physicality and scoring powerfully to take the lead.

Cooper continued his dominant form in the second half, securing his hatrick with a trademark bottom corner strike. Lucas Vaz got his brace through a tap-in off of Coopers low-driven pass to him at the backpost. One of the recent narrative of SFV was Cosimo Russo’s struggle to maintain his goalscoring form from last season but that didn’t seem to phase him as he struck a well-placed shot from distance into a net left open by Wolves’ Billy Atik. Although the goals were open Russo had to strike under the pressure of his opposition and did so impressively. The match ended with Moreland taking the very well-deserved three points and they will hope to carry this form into the next round.