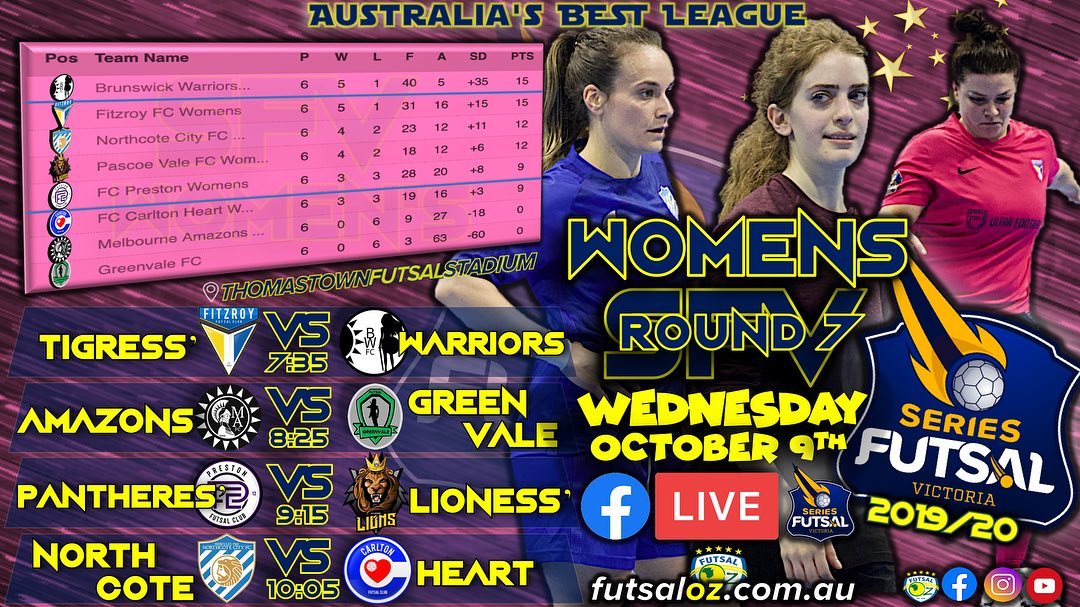 The opening game of the night saw a top of the table clash kick it all off as Fitzroy faced Brunswick Warriors. In what was a highly anticipated game, both sides came out the blocks making chances early, but it was the Warriors who struck first through Monica Fonua who netted from close range for the lead. Christina Fonua continued her goal scoring form as she found the top corner from range to double the advantage, before late in the half Penny Bakopoulos struck to have her side three up.

Fitzroy steadied at the half time break and came out on the front foot as they forced a number of good saves out of Christina Fonua, but failed to take any of their chances and were punished at the other end as Monica Fonua struck for a second time to all but seal the win, before a late strike from Monica saw her complete a hat trick as Brunswick proved too strong to sit on top of the league after the first third of the season.

Next up saw a battle of the two winless sides in the league as Melbourne Amazons took on Greenvale with one of the sides to come away with a win after this one. Amazons struck first through the returning Rachel Alonso to take an early lead, before Amir Ayache pegged back a goal to have her side on level terms. Amazons would then pull away from their opponents as they went on a run of three unanswered goals with Alonso finishing the opening half with all four of her sides goals to go into the break with a three goal cushion.

The second half was an even contest, with Greenvale netting twice more through Madeline Bove & Lauren Gallina, but it wouldn’t be enough as a further two strikes from Alex Sinclair and Zoe Schaffner saw the Amazons run away with a comprehensive victory.

Next up saw another big clash as Preston took on Pascoe Vale in what was a must win for both sides, it was Preston who opened the scoring as Sidney Allen struck from a corner to give her side the lead, before a scramble in the area fell to Elly Torre who doubled her sides advantage. Pascoe got themselves back into the game when Evangelia Parthimos struck to halve the deficit, but Allen was on her game in this one as she struck once again to see her side go into the break with a two goal cushion.

Preston seemed content with what they had at this point in the game as they shit ip shop and weathered the storm of Pascoe Vale attacks, before firing home another as Allen completed her hat trick when she classily rounded the keeper and finished to round out an important win for Preston to keep them in touch at the top.

The final game of the evening was another big one as Northcote City faced off against Carlton Heart in what was a late contender for game of the round. It took only a matter of seconds for Carlton to take the lead as Alyson Pym struck to give Carlton a dream start. Northcote worked their way back into the game and drew level when some good pressure from debutant Alanna Cerne saw her lash home to bring Northcote level just seconds into her debut. Before the break Carlton again found the net through Pym who turned home from a corner to see her side go into the break with a lead.

The second half saw Northcote battle back into the game as Carlton held their shape and looked to strike on the break. It took Northcote to change things up a little as they went for the throw in option which paid off as Melissa Garcia netted to level the game at two in the final five minutes. A two touch on the keeper awarded Carlton an in direct free kick on the edge of the area which Rebecca Davies roofed to restore her sides advantage going into the final stages, before a golden chance went begging for the Heart as they missed a tap in that would have sealed the game giving their opponents a life line. A Northcote time out with a minute and fifteen seconds to play paid dividends as Garcia lashed home from the corner for her second of the game to level the game at three and send it to a shootout.

Northcote converted all three of their penalties, while Carlton missed one of their three to see Northcote snatch the points.