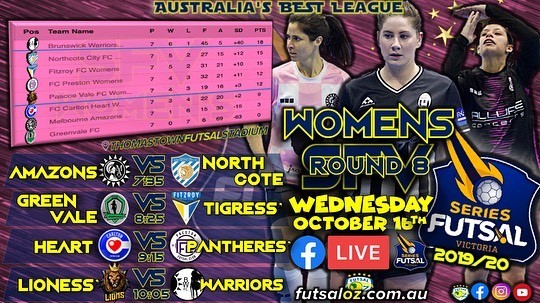 The opening game of the night saw Melbourne Amazons take on Northcote City in what was a must win for both sides. Northcote would find the net first through a Melissa Garcia strike following a turnover, but the Amazons pulled a goal back through Zoe Schaffner to restore parody. Northcote again took the lead when Garcia found her self with an eternity of time on the edge of the area seeing her net to take her side into the break with her second of the game.

Amazons started the second half on the front foot and pulled level with Alex Sinclair netting to level the game at two, but again Northcote took the lead when Claudia Dimasi struck to restore her sides advantage. The sides continued to trade blows as Sinclair struck again to level the game at three, before the Amazons took the lead for the first time through Bianca Lee, and soon found themselves two up when Schaffner struck for a second time as they looked to complete a major scalp. A quick two goals from Dimasi saw the game levelled at five, before Sinclair stepped up again, completing her hat trick to seal a famous win for the Amazons to make it two on the trot.

Next up saw bottom placed Greenvale take on second placed Fitzroy. With Greenvale ever improving, they held their own early on with Fitzroy having chances but Greenvale keeping them out, until Em Coppock broke the deadlock to give her side a slender lead at the break.

Early in the second half the Tigress doubled her sides lead through Diarna Cartwright, before another from Coppock saw her side three up. Lauren Gallina finished on the break to keep her side in the game, but it wouldn’t be enough as Fitzroy came away with the points.

Next up saw a big clash as Carlton took on Preston as both sides were chasing a crucial three points. The Heart took the lead early on through Rebecca Davies as she thundered home the opener, before Elizabeth Eyar struck a cracker of her own to bring her side level again as the two went into the break on level terms.

The Heart opened the second half with the opening goal through Alisson Pym to again take the lead, and both sides were creating plenty of chances with both keepers on their game, before a good strike from Sidney Allen again brought the Pantheress level. Both had chances to win it, with Paige Daly on fire in the goal for the Heart to send the game to a shootout.

The opening five penalties were converted, before Armina Sherifi was the unlucky one to miss as the Heart took home the points.

The final game of the evening saw Pascoe Vale looking to return to winning ways as they faced top of the table Brunswick Warriors. The Warriors started the stronger of the two bagging the opening two goals through Emma Langley and Monica Fonua for a good buffer early on. Pascoe responded when Christina Fonua was caught out of her goals and punished with Marcela Marques netting to keep her side in the game, but Brunswick again restored the two goal cushion with Lisa Fonua netting before the break for a 3-1 lead at the half.

Brunswick added to their lead in the second half when Langley struck for a second time as the game began to blow out, before Marques netted for a second time to keep the Lioness in the contest. A late strike from Penny Bakopoulos would seal the deal for the Warriors as they remain at the top of the table.