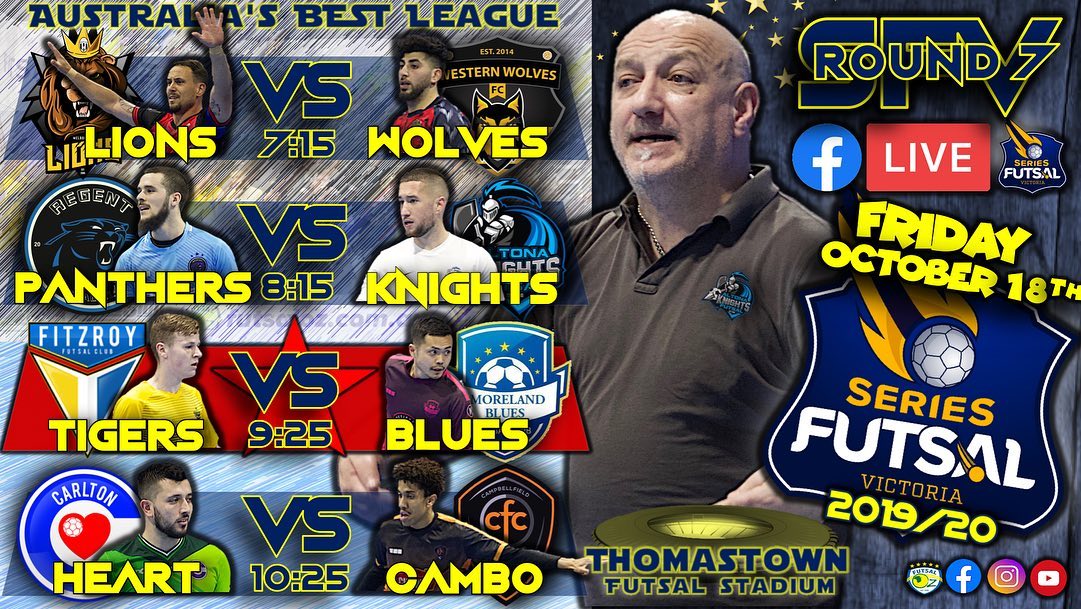 Our night of Series Futsal Victoria kicked off with the top of the table Pascoe Vale taking on third placed Western Wolves who were looking to overtake the lions.

This unpredictable clash kicked off with the opener from the man-inform Kevin Dos Santos as he took the ball in his stride down the left flank and neatly slotted it into the back of the net. Wolves’ didn’t lose momentum though as they pushed for an equaliser and eventually found it through a trademark Jose Filho toe-poke that powered under the crossbar. Lokman Ramadan then saw his shot roll into the back of the net due to an Aaron Yu fumble, but it was Andre Caro who made it level again through a sweetly hit side-ball assisted strike. Reda Zenfouri was seeing red with fury as he chased down Kevin Dos Santos, fouling him and giving away a penalty that would be taken and finished by Mauricio Novak to finish the half up for Pascoe Vale.

It indeed remained a back and forth encounter as both sides struggled to keep up with eachothers attacking intensity. Ramadan got involved again as he netted a tap-in off of Filho’s cross, which was then followed by his fantastic chest and volley that took the lead for Wolves once again, securing his hattrick. Caro then had his say once again, firing another powerful equaliser, and it was his assist to Alison Lima that allowed Pascoe Vale to get infront once again. The match wasn’t over yet though, as Filho fired home a fantastic strike from deep down the left flank to equalise once again. The clock saw under 1 minute left as Billy Atik through the ball hard for Filho to control beautifully and finish composedly on his left foot to win the game for the Western Wolves. This victory saw a shift in the league table with Western Wolves’ now being equal first with their opponents Pascoe Vale.

Our next game saw the bottom two teams in Regent and Altona face off to try to escape the relegation zone.

Our first half saw both sides hungry for a very important victory, and it was Regent who opened the scoring as Abdulkadir ‘Fundi’ Mohamed fired a close range strike to take the lead but it was Nicholas Jurcic who took the applause as he equalised with a fabulously struck longshot. Ismael Mohamed found himself carrying the ball forward and making his own space to shoot as he fired past Frano Saric from distance to retake the lead. Regent entered the second half with a shaky one-goal lead.

Our second half was the more one-side of the two as Regent played the possession game to see the game out whilst they had the one-goal advantage. They played well up scoring through Ismael Mohamed scoring his brace as he finished from close range to make it 3-1. It was a goal from Durim Cura where he practically walked the ball into the net that allowed Altona to find some sort of momentum as they pushed for the equaliser. They would eventually get it through Jayden Merceica’s finish into an open net which took the game into penalties.

The penalties wasn’t an affair that consisted of many goals as Tony Saric completed the comeback by scoring the only penalty of the shootout to win it for Altona Knights.

The two goliaths of last season faced off in what undoubtedly could have been a potential match of the night contender but the narrative was oddly one-sided.

The first half saw both teams fight hard and rough from the get-go with Moreland using their 5 fouls fairly early. An early goal from Lucas Vaz where he struck with great placement into the bottom right corner allowed Moreland to steal the early lead, but it was a #ridiculous Adam El Hayek strike from distance that floated just under the crossbar and into the back of the net that equalised. It was an extremely tight affair but was separated by a Muhamed Temel goal from outside the area that hit Peter Tamburrinos hands and crossed the line for a goal on the whistle.

The second half began the same way the first ended, with Temel striking from distance (this time on a free kick) and seeing his shot hit Tamburrinos hands but still find its way into the back of the net. It was 3-1 in Moreland’s favour but they weren’t slowing down as they fought fire with fire against Fitzroys pressure throughout the half. Temel was Tamburrinos nemesis tonight as he struck another shot through the hands of the Fitzroy goalkeeper to make it 4-1. Fitzroy played the fifth man tactic which allowed Atay Ibrahim to finish a strike into an open net from his own half, and a close ranged goal to make his brace allowed him to finish off Fitzroy at 6-1.

Our last match of the night pitted two Series Futsal giants against eachother as Carlton Heart took on Campbellfield.

Our first half saw the action kick-off quickly as Campbellfield took the early lead through a horror blunder that saw David Barra quite literally drop the ball into his own net. The misery was piled on as Brenno Polatti scored from distance to double the lead.  It was Abdirizak Ahmed though that carried the ball through the Campbellfield defence on two fantastic runs that saw him assist both Joshua Pulvirenti and Arturo Garzon Diaz as they walked the ball into the back of the net for a goal each. It was 2-2 and Campbellfield had used up their six fouls as they gave a last-minute penalty away to a Carlton team that had Ernie Simsek on the court. Simsek stepped up and struck the penalty off the post and into the back of the net with grace and power to take the lead and close the half.

The second half saw Carlton continue the pressure as they found another goal through a tidy finish from Ernie Simsek to make his brace. Ahmed then continued his fine form as he finished a magnificently flicked backheel to stretch the lead to 5-2. Ubeyde Cicek gave his side hope with a powerful side-ball lay-off strike and with this goal it was clear a resurgence was on the rise. Thomas Brossard then had his say finishing from close range, but it was Henrique Pimenta’s fantastic run from his own half that saw him finish a deflected strike to equalise at 5-5 emphatically. Dani Chaabani tapped in a goal to equalise, but it was Stephen Gustus who took the game to penalties after another fantastic run from Ahmed that allowed Gustus to fire from close range.

It was an entertaining penalty shootout that saw Cicek, Garzon Diaz, Michael Nguyen and Stephen Gustus score their respective penalties, but Henrique Pimenta was the difference as he scored a precise penalty to win the game.