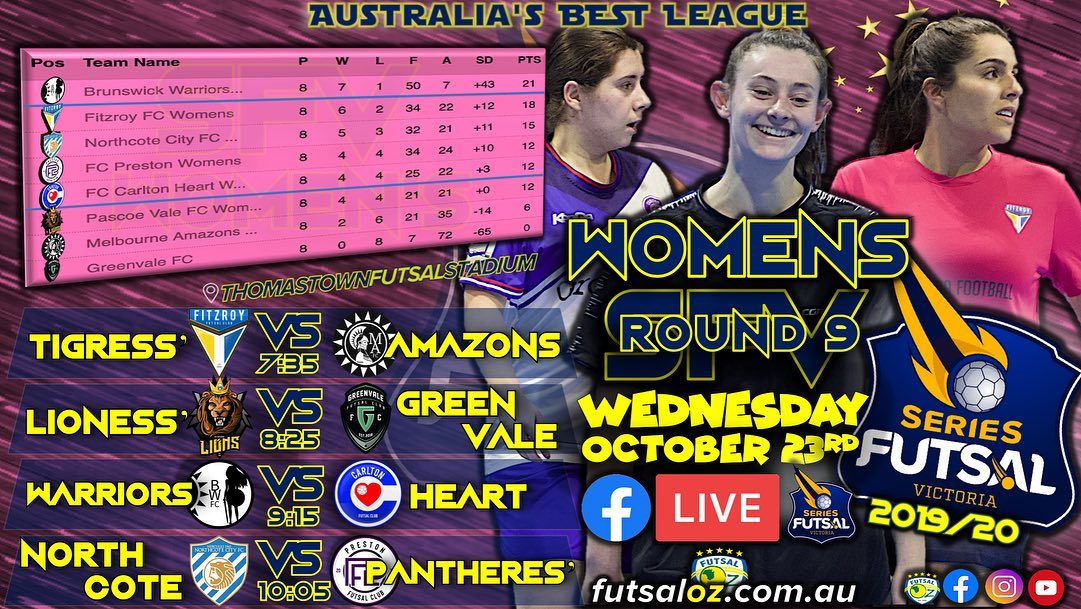 The opening game of the evening saw second placed Fitzroy take on a rejuvenated Amazons side who were looking to take another big scalp. The Amazons got off to the best possible start when Alex Sinclair beat her player and fired a low effort home for the lead, and though Fitzroy were not without their chances, the Amazons held their one goal lead into the half time break.

Early in the second half the Amazons struck again on the break as Alycia Eicke netted to double the Amazons lead. Fitzroy got themselves on the board with a penalty being converted by Stacey Papadopoulos to halve the deficit, before Papadopoulos rounded Sam Dowling to finish again and level the game at two. Fitzroy were ahead when Papadopoulos completed her hat trick from a tight angle, and with the Amazons pushing for an equaliser, it wasn’t to be as Em Coppock pounced on a loose ball and slotted home to complete the turn around and give Fitzroy an important three points.

Next up saw Pascoe Vale face off against bottom of the table Greenvale. In what was a must win for both, the Lioness flexed their muscled in the first half as they added five unanswered goals, with Liesl Woods completing a first half hat trick, while singles to Bruna Silva and Jess Byrne had their side in control at the break.

The second half saw Greenvale find the net on two occasions through Madeline Bove and Lauren Gallina, but it would be just a small consolation as Pascoe added a further seven goals to their tally, with Woods finishing with a game high four goals, while Evangelia Parthimos & Abbey Flight both netted braces in the commanding win to get their season back on track.

Next up was a big clash as Brunswick Warriors took on Carlton Heart with both sides needing the win to remain in the title hunt. Carlton got off to a flying start with Alyson Pym bagging the opening two goals to give her side a two goal lead. Brunswick battled back into the game and halved the deficit before the break through Lisa Fonua to keep the game in the balance at the break.

Brunswick started the second half the way the Heart began the first with two quick goals as Lisa Fonua struck her second and Monica Fonua also got herself a goal to give the Warriors the lead for the first time on the night. A late ball into the area from Pym was turned home by Savanna Anastasopoulos to level the game at three and send it to a shootout.

Hero in normal time Anastasopoulos was the unlucky one to miss her penalty as the Warriors escaped with the three points against a determined Heart side.

The final game of the night saw Northcote City FC take on Preston in what was a must win for both as they looked to keep in touch with the league leaders. A strong first half from Northcote saw them build a 4-2 half time lead thanks to a brace from Claudia Dimasi and singles to Melissa Garcia & Mary Hubeek to give them the edge, while goals from Steph Galea & Elly Torre kept Preston in the contest.

Preston steadied themselves at the half and pulled a goal back through Armina Sherifi to close within one goal, and going into the final five minutes the Panthers’ were level when Galea finished her one on one chance to level the game at four and send it to a shootout.

Northcote’s Iesha Atik proved the star in the shootout as she denied Steph Galea and Taylor Halabi, while her side made no mistake from their spot kicks to take away a vital win.