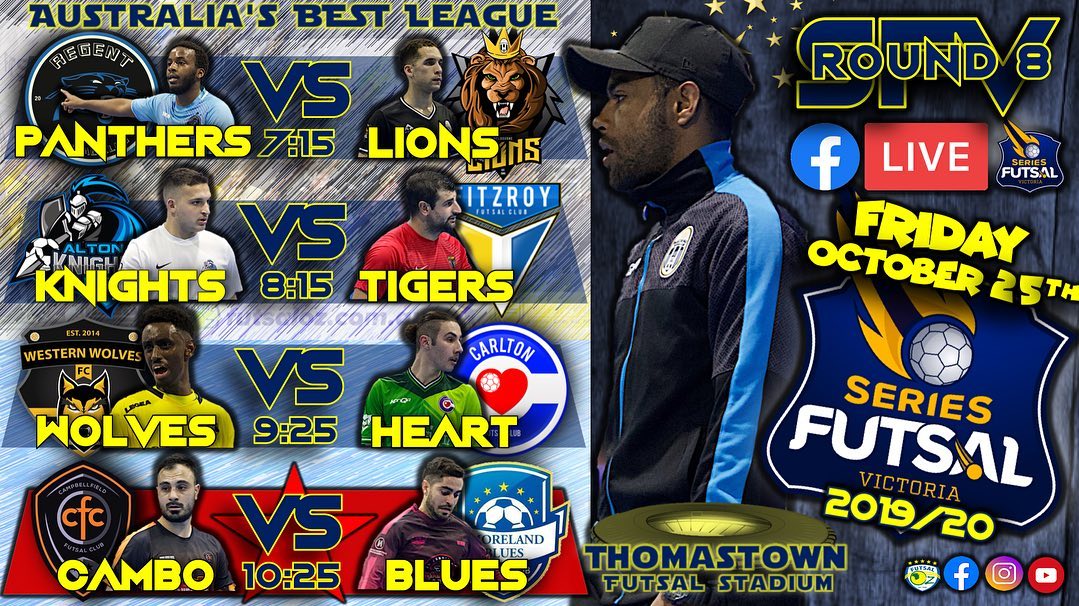 Our first fixture of the night resembled a David vs Goliath clash as the winless Regent took on top of the table Pascoe Vale.

Our first half was a cagey affair as although Pascoe Vale held more of the possession, both sides were relentless in letting the opposition know that they were up for a fight. It was an early and composed Joao Da Silva goal that separated the sides, but only for a limited time as Abdulkadir Mohamed aka Fundi equalised with a goal from extremely close range. Pascoe Vale saw the half out strongly but the score was all square.

The second half saw more goals and more frustration from both sides as the scoreline increased whilst the yellow card count followed. Joao Da Silva got his brace from inside the penalty area but Regent equalise through Fundi with a very well-taken strike. The game remained level until Fundi had his say again, striking through Aaron Yu’s legs after skilfully dribbling past Da Silva to allow himself to get in front of goal. Pascoe Vale didn’t lie down though as Da Silva redeemed his poor defensive efforts by snatching his hattrick confidently. It took Pascoe Vale until the final minute to get the goal to get their noses infront through Kevin Dos Santos’ powerful, low strike, but it was Alejandro Gomez’s #ridiculous rabona that stole the show as the game finished 5-3 to the league leaders.

Our next clash saw Fitzroy look for redemption against Altona after they fell to them in penalties in the opening round.

This match played out unlike the first time these sides met as Fitzroy played confidently with their main man Scott Rogan retrieving a hattrick of bottom-corner goals. All the goals were very similar as he struck hard and low from outside the area and into the bottom corners. Rogan proved he is a step above the competition as he single-handedly gave his side a comfortable 3-goal lead, which was complimented by Elias Parthimos’ fantastically placed longshot to make it 6-0.

Our second half saw Fitzroy continue the domination, with Rogan snagging an assist to Adam El Hayek at the backpost which was followed by a goal for Altona from Michael Lettini who struck low and precise to close the gap. The goal was good, but not enough as Sinan Gluhak would get his name on the scoresheet into an open net to make it 6-1. A brilliantly left-footed placed left footed strike from Rogan saw him get his fourth, and a slow but accurate Jackson Shaw longshot finished the game off at 8-1.

Western Wolves – Carlton Heart Next up was the battle for second place as second positioned Wolves took on third placed Carlton in a match filled with emotions.

This unpredictable clash began with a phenomenal Jose Filho strike that couldn’t have been more top corner. Lokman Ramadan would double the lead with a powerful strike but it was veteran Ernie Simsek who struck into the top corner to close the gap. An own goal off of a Hayden Kanjo strike made it 3-1 whilst Nikola Velkovski stretched the lead further to 4-1. Abdirizak Ahmed struck hard and high into the top corner to close the gap and maintain hope for his side entering the second half.

The second half kicked off with Ahmed scoring to make his brace, but it was a strongly-hit Kanjo goal that stretched the lead once again. The midget messi Moe Matar grabbed goal to keep his side in the game, and it was Simsek’s second that allowed the comeback to be complete at 5-5. Reda Zenfouri attempted to give the dagger to the Heart’s by scoring low and hard under the opposition goalkeeper, but it was another Matar strike that found the bottom corner powerfully to take the game into penalties.

The penalty shootout saw Simsek score the only penalty for Carlton, but it was Velkovski, Filho and Zenfouri that all scored their strikes to win the game for the Wolves.

Our last match of the night was a clash of the titans as two star studded sides in Moreland and Cambo locked horns for three important points.

This ridiculous clash began with Enrique Pimenta opening the score into an open net from inside the penalty area. Moreland only got stronger through conceding though as a powerful brace from Cooper saw them gain the lead. Rico Hauser fired a trademark long shot to stretch the lead further, and it was Cooper who got his hattrick after sending a defender to the floor and firing into the bottom corner. Muhamed Temel finished from just outside the area low and hard, and it was a Lucas Vaz header that closed the half with the scoreline shockingly being at 6-1 to Moreland.

Atay Ibrahim opened the half with a powerful strike, but Ubeyde Cicek responded quickly with a low and convincing shot of his own. Pimenta then added another to his tally, and it was Cicek’s goal after a scramble in the penalty area that allowed him to get his brace and close the gap to 7-4. Cambo were knocking on the door, but it was Atay Ibrahim who nutmegged his opponent to get himself in front of goal and emphatically chip the goalkeeper to finish Campbellfield off.