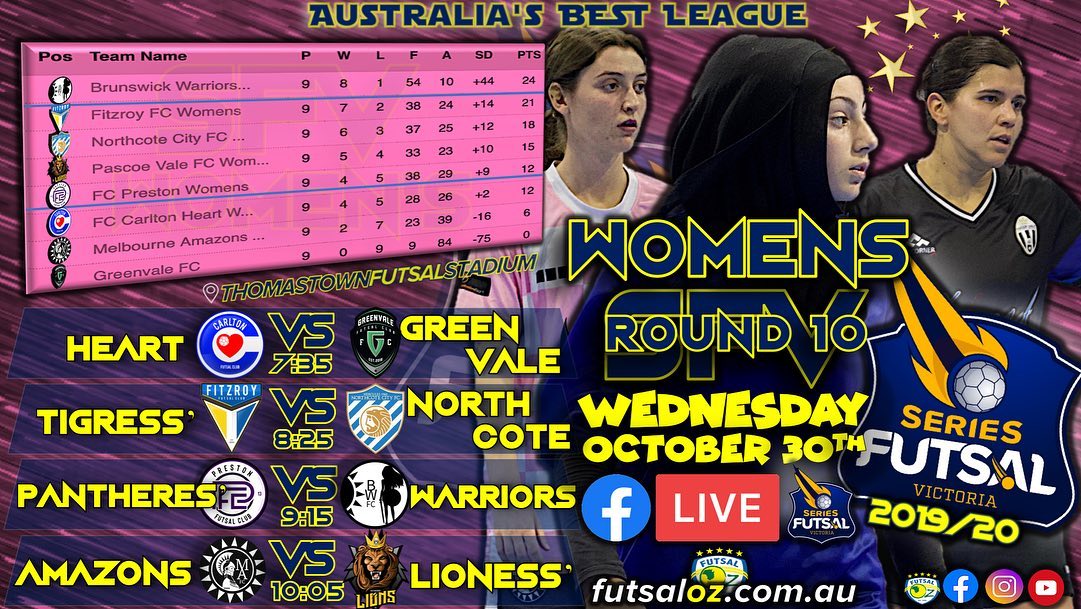 The opening game of the night saw Carlton take on bottom of the table Greenvale as they looked to climb the table. A strong first half from the Heart saw them open up a 4-0 half time lead thanks to a brace from Katrina Tsalikidis and singles to Alyson Pym & Morgan Kirk Eaton had the Heart in control at the break.

The second half was the same story as the Heart stuck four more times with Pym the standout to net a second half hat trick taking her tally to four for the game while Valentina Shamoon also netted to seal a convincing win for the Heart.

Next up saw what is always a nail biting contest take centre stage as Fitzroy took on Northcote. It was the Tigeress’ who struck first as a good ball to the back post found Ebru Efe who converted the opener. Northcote didn’t take long to steady the ship as two very well worked goals on the counter attack as Mary Hubeek and Camilla Fresneda tap home to give their side the lead. Laila Abdullatif then found the net to open up a two goal cushion, but Fitzroy stemmed the flow of goals from the kick off as Ili Jakab picked out the top corner from range to have the game in the balance at the break.

Next up saw Preston take on league leaders Brunswick as the Warriors looked to stretch their lead at the top. Preston raced out of the blocks and got out to a pretty convincing lead thanks to a brace from Elizabeth Eyar and a single from Steph Galea giving the Pantheress’ a 3-0 advantage. As Brunswick so often do, they clawed their way back into the game, and took a lead into the half time break as a brace from Monica Fonua was supported by singles to Emma Langley & Lisa Fonua to give the Warriors a slender lead.

Brunswick raced out of the blocks in the second half and never looked back as a four goal to one second half saw them run out convincing winners with a second half brace to Emma Langley completing a hat trick, while Lisa Fonua completed a brace of her own to seal a convincing come from behind win from the Warriors.

The final game of the night saw an in form Amazons take on Pascoe Vale in a must win for both sides. A commanding first half display from Pascoe saw them build a handy 3-0 lead thanks to a brace from Marcela Marques and a single from Priscilla Ribas setting the game up at the half for the Lioness’

Pascoe started the second half in the same fashion as they looked to have killed off the game when Marques completed her hat trick and Liesl Woods netted a first of the game for a 5-0 lead, and despite a header from Bianca Lee getting the Amazons on the scoreboard, it would only be a footnote in the game as Marques netted for a fourth time to seal a massive win for Pascoe.