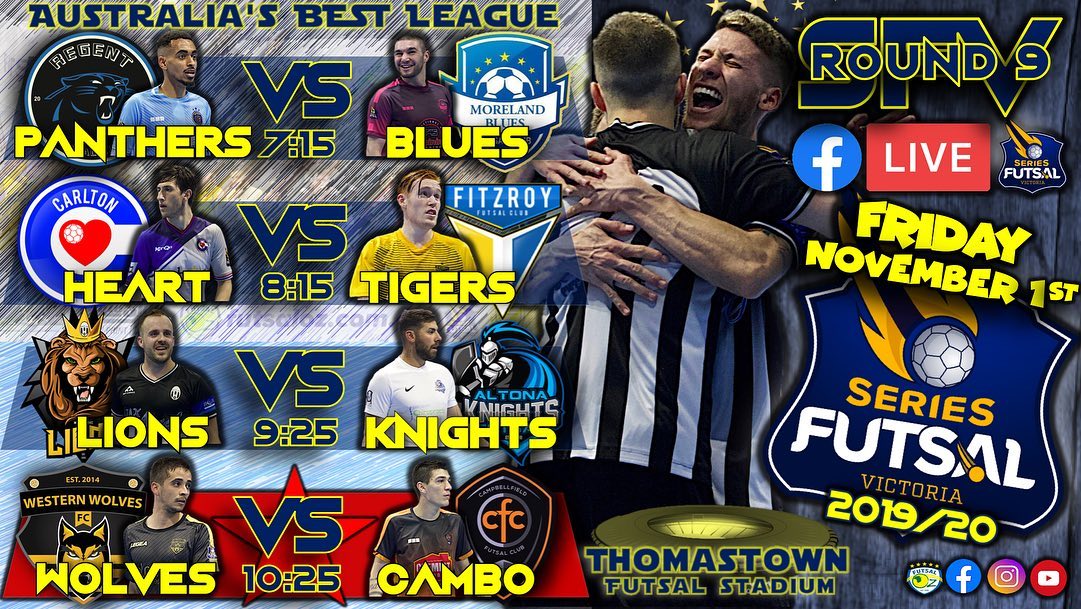 Our first match of the night appeared to be an uphill battle for Regent as they faced an inform Moreland side fresh out of dominating Campbellfield the previous week.

Lucas Vaz opened the scoring well and it was Cosimo Russo who complimented his teammates goal with a strike from distance that deflected off of Osman Ahmed to double the lead. Russo scored again through a distanced volley, and it was Regent who pushed for the next goal and eventually getting it through a smart Abdulkadir Mohamed freekick. Adam Cooper found himself receiving the ball after a deflected ball fell to his feet, which allowed him to fire a very well-placed strike under the crossbar to regain the momentum for his side.

The second half told a similar narrative to the first, the only difference being less goals were scored. The score line didn’t quit do Regents performance justice as they were valiant opponents for a strong Moreland side but ultimately saw themselves conceding another two goals and losing 6-1. The first goal came in the form of Russo’s strike to make his hatrick off of a controversially won corner. Kazuhide Hirose closed the game with a well placed finish from outside the area.

Our second of the night was an unpredictable clash as fourth place Carlton Heart faced long-time rivals Fitzroy who sat just beneath them in fifth.

Our first half was a #ridiculous affair between two fiery sides. Nobody could predict the intensity these teams came out with as both Fitzroy and Carlton’s players and staff were caught seeing red at respective points in the half. The deadlock was broken by none other then the youngster Adam El Hayek who finished into an open net after receiving a pass from Scott Rogan. The game really began to heat up as Fitzroy’s bench were completely losing their lids, which would eventually lead to yellow cards being pulled out of the referee’s pockets. Although they verbally lost their composure, Fitzroy saw the half out at 1-0.

The second half saw the action continue as both sides fought hard and loud as the appeals and dirty tackles certainly didn’t stop. Carlton were certainly knocking on the door of an equaliser but it was Peter Tamburrino who was the difference between the sides for the entirety of the game. Shot after shot Tambo saw himself keep his cleansheet and it left people questioning the powers of his new Movember moustache. It was a Leo Kimpara goal off of a side-ball pass that struck the roof of the net and doubled the lead for a well-performing Fitzroy side. Fitzroy saw the game out with great defensive discipline which was complimented by the reliance of a great performance from Tamburrino.

Our next match saw league leaders Pascoe Vale face the hungry Altona as they looked to break away from the relegation zone.

The first half of this David vs Goliath clash saw Joao Da Silva open the scoring early from close range. He’d would strike again later in similar fashion to make his brace. Kevin Dos Santos complimented both of Da Silva’s goals as he collected his brace aswell, following his goals with animated celebrations. Pascoe Vale continued the domination, and it was Jake Besenyi who had his say as he snatched a brace of his own. The highlight of the half was Besenyi’s powerful volley from the right flank that rifled into the top corner. The half finished at 6-0 and this one seemed over early.

Our second half saw Pascoe Vale continue the domination as they scored quickly through a Jason Barrientos Backheel. It was 7-0 and the leaders weren’t slowing down, firing a powerful strike through Dos Santos to top off his hatrick. Another strong distanced strike from Besenyi finished his hatrick aswell, but it was Camilo Martin who got a consolation goal from close range to steal the clean sheet off of PVA. Another great strike from Dos Santos saw him get his fourth and finish the game off at 10-1.

The first half of this stunning clash saw Brenno Polatti open the scoring from close range which was followed by emphatic celebrations from the pack crowd. Wolves marquee man Jose Filho would equalise soon after though, splitting two defenders with a precise strike. Reda Zenfouri confidently ran in on goal, skilfully ball-rolling and finishing under the opposition goalkeeper to take the lead. Henrique Pimenta powerfully responded soon after, and the list of goalscorers was starting to look like an ensemble of some of Series Futsal’s best players. A strong goal from Lokman Ramadan allowed Wolves’ to steal the lead back once again and finish the half on top at 3-2.

Brenno opened the second half up with a wonderfully taken goal where he needed the perfect balance of composure and precision to find the bottom corner, which he did. Ubeyde Cicek would retake the lead against his former club with a quality goal from just outside the area. Filho fired home another equaliser as he does, but it was Cicek who retrieved his brace to retake the lead again powerfully and emphatically. All eyes were on this one as nobody knew which way it could possibly go. Filho got his hatrick off of Hayden Kanjo intercepting the ball and allowing his teammate to tap-in his third equaliser, but it truly was a game of cat and mouse as Pimenta stole the lead back again to finish the game off at 6-5 to Campbellfield.