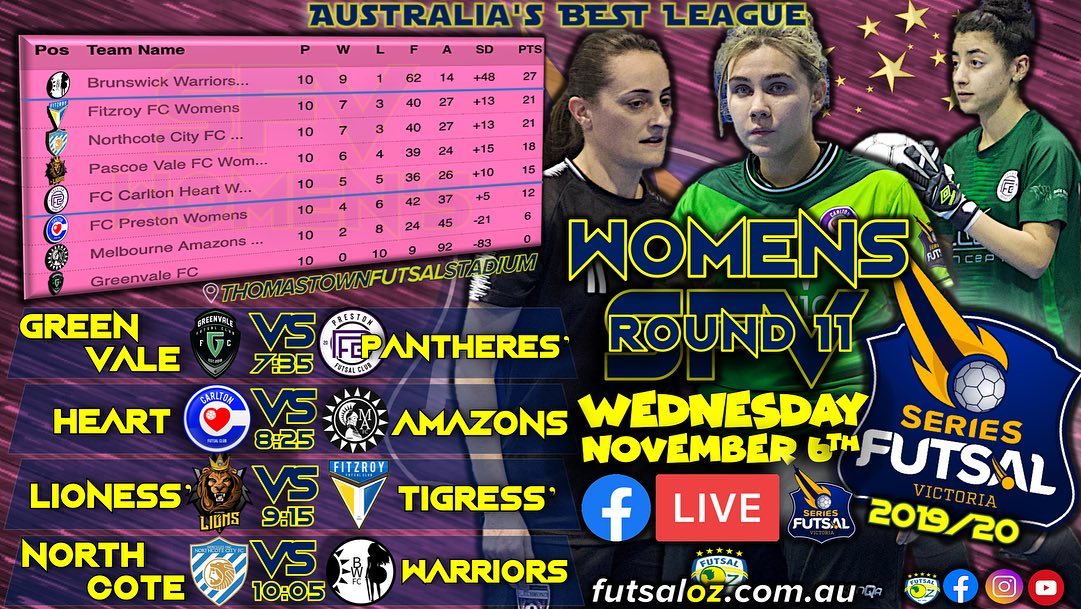 The opening game of the night saw bottom placed Greenvale searching for their first win as they took on Preston who were pushing for a top four finish. Preston were in control early and built a commanding 6-0 half time lead thanks to braces from Elly Torre and Steph Galea, while Taylor Halabi & Sky Jensen both netted singles to have the Panteress’ in control at the break.

The second half was more of the same from Preston as they cruised to a big win and a boost to their goal difference, with Galea and Jensen both completing hat trick, while Halabi secured a brace and Bousra El Khatib & Janelle Sammut both finding the net to help their side to a big win.

Next up saw an in form Carlton side take on Melbourne Amazons in a game that both sides would not want to lose. A dominant first half from the Heart saw them build a commanding 4-0 half time lead thanks to a brace from Rebecca Davies and singles to Alyson Pym & Katrina Tsalikidis had the Heart in control at the break.

The Amazons steadied the ship at the break and managed to stop the Heart from netting any more goals, while also netting a consolation goal from Alex Sinclair to win the second half, but the Heart had done the damage in the first half as they ran out convincing winners.

Next on the card saw Pascoe Vale take on Fitzroy in what was a big game in the course of these sides seasons. It was Pascoe who opened the scoring with Bruna Silva firing home at the near post to give her side the lead. In what was a defensive game, goals were hard to come by and the Lioness’ got a big one on the stroke of half time as Abbey Flight found Silva at the back post to take the Lioness’ into the break with a two goal advantage at the break.

Moments into the second half Fitzroy halved the deficit as newcomer Chloe struck to halve the deficit, but Pascoe looked too organised as a well worked move on the break was finished off by Jess Byrne, before Byrne fired home for a second time for an almost game clinching 4-1 lead. Fitzroy battled until the end scoring a late consolation through Stef Oddo but it was too little too late as Pascoe keep their top four hopes alive.

The final game of the night was a massive contest as the two title contenders went head to head in Northcote and Brunswick Warriors. A tight first half saw both sides hit the net once each with Lisa Fonua netting for Brunswick, while an own goal had Northcote on the board to go into the break with the game in the balance.

The second half followed the same trend as both keepers were on their game until late in the piece when a stunner from a tight angle from Monica Fonua would seal all three points for the Warriors to send them nine points clear.