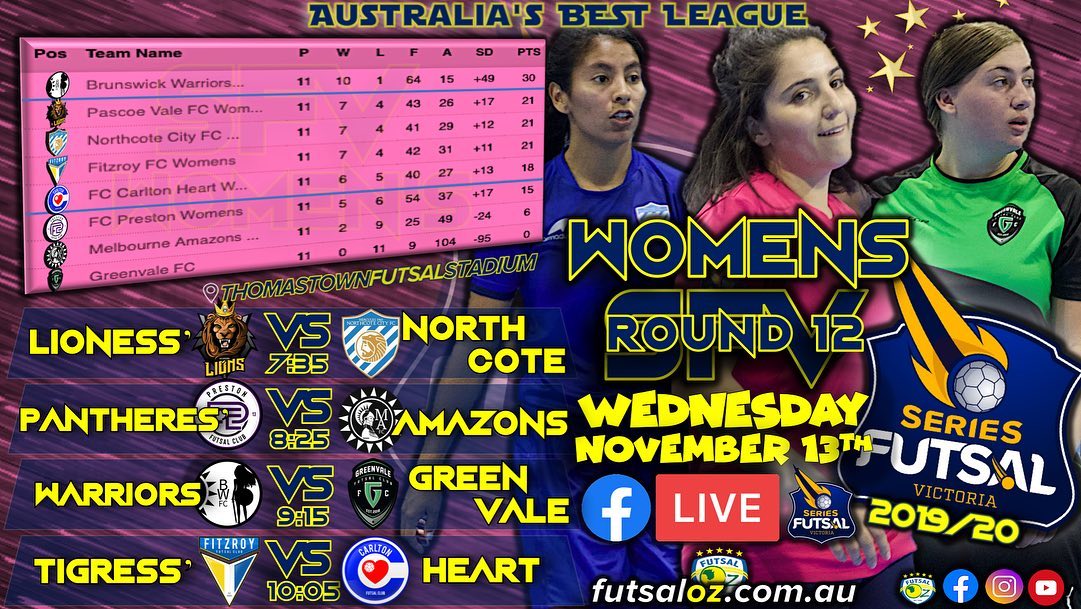 The opening game of the night saw Pascoe Vale take on Northcote City, as both sides were fighting for a top four finish. Northcote had a strong first half as they built a solid two goal lead at the break with goals from Melissa Garcia & Giuliana Pavia had City in control.

Pascoe fought their way back into the game and netted twice through Clarissa Allerton & Abbey Flight, but it wouldn’t be enough as Northcote struck three more times with goals from Alana Cerne, Camila Fresneda & a second to Pavia. sealed a hard fought win for Northcote.

Next up saw Preston take on Melbourne Amazons, with both sides pushing for a top four place, a result here was crucial. Preston built a lead in the opening half as a brace from Sky Jensen helped her side take a lead into the break, supported by singles to Steph Galea & Elly Torre had them in control, while goals from Meg Grove and Alycia Eickle kept the Amazons in the game at the break.

The next game saw Brunswick Warriors take on bottom of the table Greenvale, in what was expected to be a landslide result, Brunswick only managed two first half goals through Daniella Galluccio to have the Warriors in control.

The second half saw Greenvale fall away as the Warriors ran away with the game seeing Monica Fonua complete a second half brace, supported by singles to Pam Demetriou, Penny Bakopoulos & an own goal sealed a comfortable win for Greenvale.

The final game of the night saw Carlton looking to climb into the top four as they faced third placed Fitzroy. An important game for both sides, The Heart struck in the opening minute through Alyson Pym to take the advantage. Fitzroy then turned the tide of the game as they struck three in quick succession with goals from Ebru Efe, Ili Jakab & Stef Oddo had the Tigeress’ in control at the break.

Early in the second half Carlton again pulled within a goal, as Katrina Tsalikidis netted on her left foot, but Fitzroy again extended their lead when Jakab tapped home her second at the back post, before a late free kick saw Em Coppock seal an important win for Fitzroy.