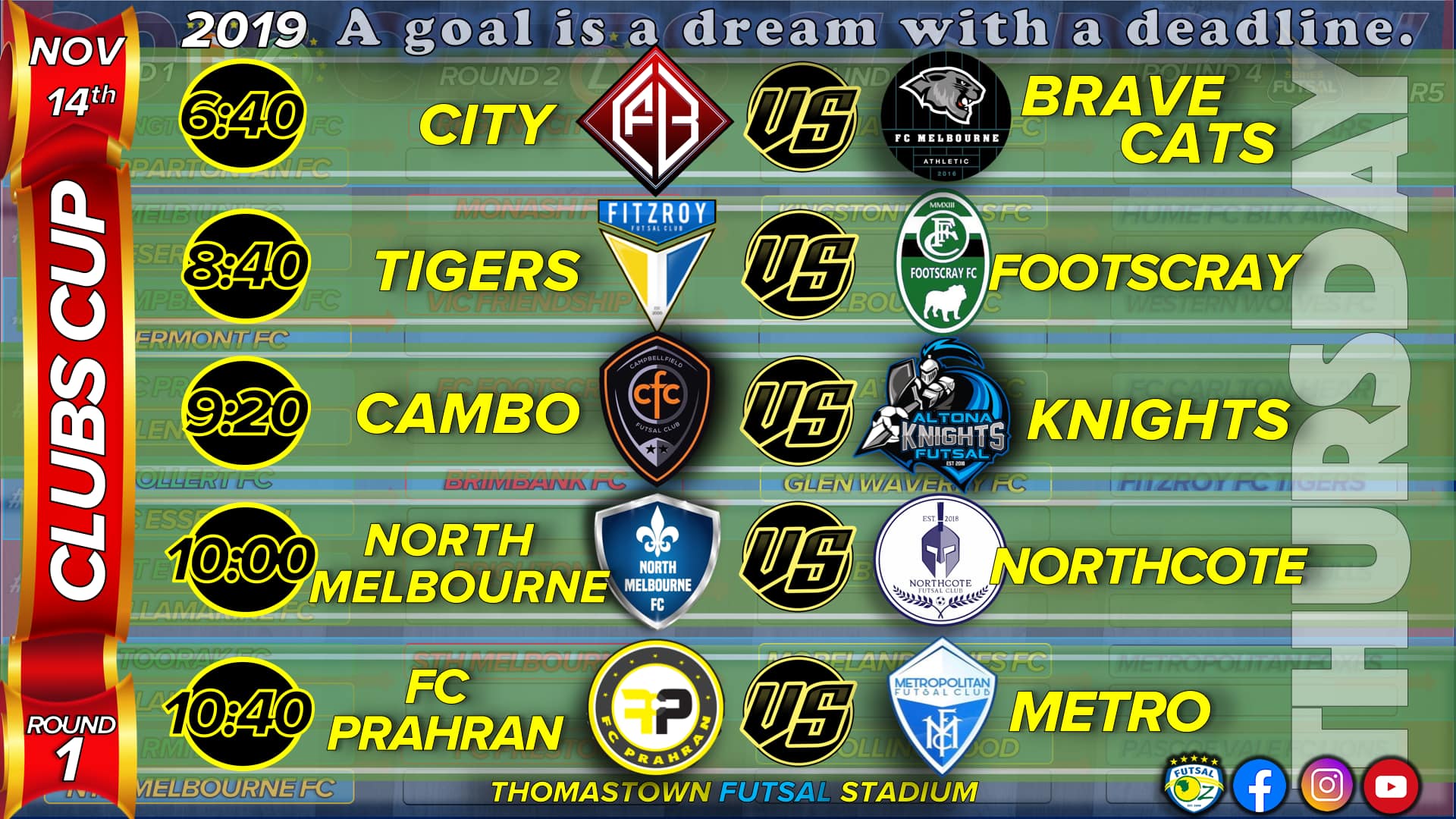 The opening game of the 2019/20 Clubs Cup was an all State League Championship affair as Brunswick faced Melbourne Athletic. There was drama from the start as Melbourne struck first through Seb Lock and in the process saw Brunswick stopper James Szabo injured, and with no recognised back up, they were forced to play the fifth man tactic for the remainder of the contest, and it was risk vs reward as they drew level through Ben Monteleone, only to concede an own goal off Michele Giotta, before firing home twice more through Giovanny Garcia to take a slender 3-2 lead into the break.

The goals continued to flow as Athletic were punishing the Brunswick mistakes, on the back of four second half goals from Nic Ormond and a second from Seb Lock had saw them go to a penalty shootout, while another to Garcia saw him complete his hat trick, supported by singles to Michele Salvi, Simone Pelletti & Andrea Zaccone sent the game into extra time.

With the golden goal rule in effect, Brunswick would find the crucial winner through a fourth Giovanny Garcia goal to take home the win and progress to the second round.

Next up saw Champions Fitzroy enter the competition as they took on State League One side Footscray. It was the Tigers who drew first blood through a Tyler Garner strike, before Footscray respond through Mehraz Chowdhury to level the scores at one. Fitzroy again took the lead through Garner after the well worked set piece as they carried a slender lead into the break.

The Tigers starts the second half off on the front foot as Elias Parthimos struck into the bottom corner to give his side a two goal cushion, but it didn’t last long as Jamal Ali pulled a goal back for Footscray, and soon after they were level when a Tom Franklin strike deflected home to level the scores at three. Some good work from Scott Rogan saw him beat a man before finding Tal Galper unmarked to restore the lead for Fitzroy. Footscray were not going away as they levelled again from a throw in, seeing Ahmed Azzam finish to send the game into golden goal.

The miracle was complete when Franklin netted his second of the game to snatch a famous win for Footscray as they knock out the defending Champions and progress to the next round.

Next up saw an all Series Futsal Victoria affair with Campbellfield taking on Altona Knights. Always an interesting contest, Altona raced out of the blocks to a three-nil lead with goals from Ivan Razumir, Nikola Jurcic & Michael Lettini giving the Knights a dream start. Campbellfield hit back before the break through a classy Henrique Pimenta chip to remain in the contest.

Campbellfield looked a different side after the half as they struck four straight times to take the lead, and despite some resistance from the Knights, it wouldn’t be enough as a second half brace from Fabio Albuquerque set Cambo on their way, supported by a second from Pimenta and singles to Khaled Ayache & Danny Chaabani seeing Campbellfield survive an early scare, to progress through to the next round.

Next up saw an old rivalry renew as North Melbourne of State League One, took on State League Two side Northcote. The Mystics have been finding their feet of late and got out to a two goal lead at the break with Johnny Crocaris and an own goal giving the Mystics the advantage.

The second half saw North Melbourne only add to their tally with Crocaris adding a second, and Jordan Constan & Chris Dimitropoulos all but sealed the game at 5-0. A pair of late goals from Nick Stevenju added a consolation to the scoreline, but it wouldn’t be enough as North Melbourne progressed to the next round.

The final game of the night saw State League One side Prahran take on State League Championship side Metropolitan. A tight first half saw Metropolitan edge the scoring as Kemal Irdem bagged a brace, supported by singles Matthew Cundari & Alija Redzepovic had them in control, while goals from Erick Vasquez & Bugra Yapar kept Prahran in the game.

The second half was even tighter but Metro proved to have too much experience as Irdem completed his hat trick and Alija Redzepovic completed a brace to see Metropolitan through to the next round, although Prahran gave all they had, it wouldn’t be enough.