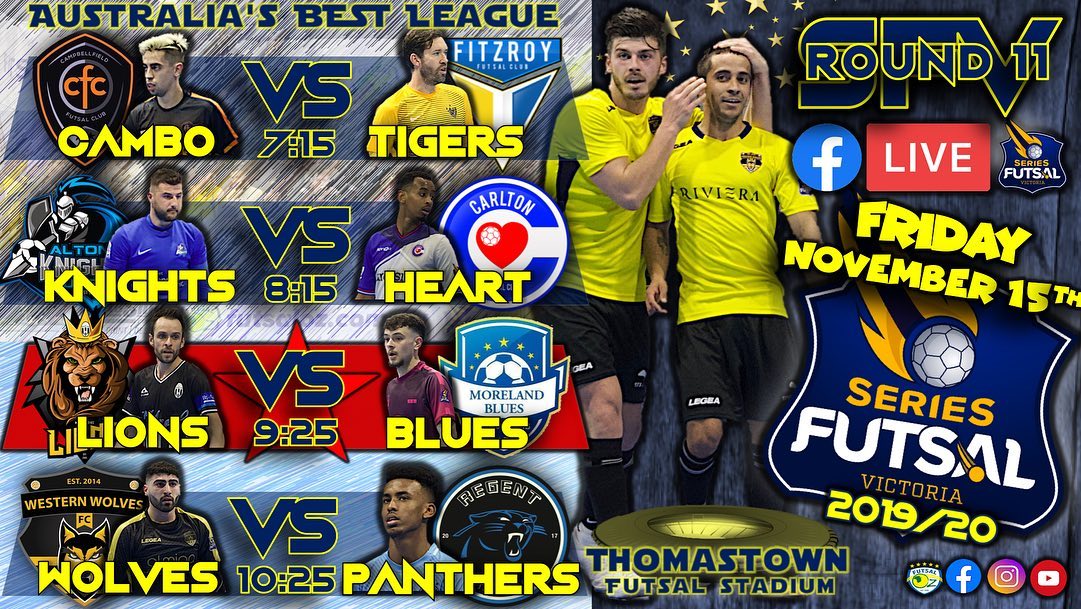 Our first match saw the reigning champions who are struggling to rediscover last seasons form, take on a Campbellfield side desperate to redeem themselves after their shock loss to Regent last round.

Much like the first time these teams met, this match wasn’t shy of controversy and aggression as both sides made their voices heard towards each other and the officials throughout. The first goal came in the form of a precise Scott Rogan free kick, who carefully struck his shot under the wall and into the back of the net to take the early lead. Both sides were very much alive as they attacked one another, but it was Henrique Pimenta who struck next with a powerful equaliser. Taking the ball in his stride on the left flank, he struck with power and determination across goal into the opposite bottom corner. The goal came after a controversial side-ball call from the referees which left Fitzroy players stunned.

Henrique Pimenta opened the half with a goal to take the lead, but it was well-taken low strike from Elias Parthimos that allowed Fitzroy to stay in the game. Pimenta would have his say again though, striking once more from a free kick into the top left corner extremely accurately. Cambo weren’t stopping now as crowd-favourite Brenno Polatti scored from close ranged twice to make the score 5-2. Fitzroy were desperate for a lifeline as Scott Rogan played the fifth man in a goalkeeper jersey and would find the net eventually but a brace from Dani Chaabani meant that this one was finishing 7-3. The goals came in the form of a cross-court lob into an open net and a strike from inside the penalty area after he stripped Leo Kimpara of the ball in Fitzroy’s defence.

Our second of the night was a relegation battle as Altona Knights took on a Carlton Heart side who were hungry for a chance to climb the table.

Carlton were hungry indeed as the first half saw them fire on all cylinders, netting five whilst only conceding once. The goals came in the form of two Arturo Garzon Diaz close range strikes, the latter being the more impressive as he raced to a free ball with immeasurable speed firing a first-time volley to make it 2-0. The next goal was a Dylan Govic tap-in off of Diaz’s backpost cross, which was followed by an identical goal from new signing Thomas Natoli. Moe Matar struck hard and low of the near post with an exquisite finish to make it 5-0, and a last minute goal for Altona through Luke Jurcic’s close range strike closed the half at 5-1.

The half opened with Diaz taking the ball in his stride and showing incredible flair and skill when he fooled the defender  and struck past Frano Saric to make it 6-1. Altona grew stronger through conceding though, as Michael Lettini struck powerfully from range to close the deficit. Jurcic then had his say once again from outside the area, and it truly was game on again at 6-3. A great showing from David Barra allowed his side to hold on throughout the rest of the match, but it didn’t come without a scare as Jurcic secured his hattrick with a #ridiculous chip into the top left corner in the closing minutes. With under 30 seconds on the clock, Mark Saric got his goal to give his side a last-gasp momentum burst but it was too little too late as the game finished at 6-5 to Carlton.

Our third fixture of the night was a battle of the goliaths as first placed Pascoe Vale took on second placed Moreland in a clash that had everyone’s attention.

Our first half showcased an affair as tight as you’d expect with both sides fighting for the early lead. It didn’t take long for the opener to appear though, as Kevin Dos Santos stripped Muhamed Temel of the ball in his half, sprinted down the line where he would pass to Jake Besenyi, who would slot the ball under the goalkeeper to make it 1-0. Alejandro Gomez was stealing the show with his flair and skill but it was the close range goal that allowed him to celebrate with his teammates as he doubled the lead for his side. A class first-half performance from goalkeeper Aaron Yu allowed Pascoe Vale to enter the second half with a cleansheet.

Our second half opened with Besenyi collecting his brace as he struck from the left flank once again, powerfully finding the top right corner extending the lead to 3-0. Moreland may have seen the deficit widen, but the team in blue found a resurgence after Mumed Temels close ranged goal. The goal saw momentum flip Moreland played the fifth man tactic which allowed Cosimo Russo to fire a bullet whilst wearing the goalkeeper’s jersey. Lucas Vaz would find himself heading in a goal from centimetres out as the ball luckily fell to him at the backpost which allowed this game to go into penalties.

The penalties saw Joao Da Silva and Alejandro Gomez score for Pascoe Vale but it was Cosimo Russo, Atay Ibrahim and Jose Filho who won it for Moreland and completed the comeback.

Our last game of the night saw a resurgent Regent side looking to start a win-streak take on a strong Western Wolves team.

The game started with roars from the crowd as the Regent faithful found themselves backing their team once again. We kicked off with a Hayden Kanjo goal which was struck from close range after fantastic dribbling to beat the defence and goalkeeper. Hana Shamon then struck from range, and it was Robert Stambolziev and Michael Ayayi who both scored simple goals deep in the opposition half to make it 4-0 early. Kanjo would then score a toe-poke to make it 6-0, but it was Regent’s Mubarak Ahmed who struck hard into the near-post to close the deficit. Shamon got his brace from close range, but Regent responded once again through Osman Ahmed’s fantastic dribbling and finish. Wolves’ still weren’t done as they struck late to make the lead 8-2 through Stambolziev to make his brace.

Joaquin Jimenez assisted Osman Ahmed to make it 8-3, but the goals didn’t stop there as Yahya Khalifa found the back of the net aswell as Abdulkadir Mohamed and that wasn’t it. Mubarak Ahmed struck to get his brace and the spectators were truly losing their minds at this point. It was 8-6 and Regent were going all-out aswell as the spectators, a ‘let’s go Regent, Regent suck’ chant divided the crowd and entertained all. There was one minute to go and Regent were knocking on the door on their 7th goal, and they found it through Khalifa which made his brace, but that was it as the game finished 8-7, devastating Regent fans.