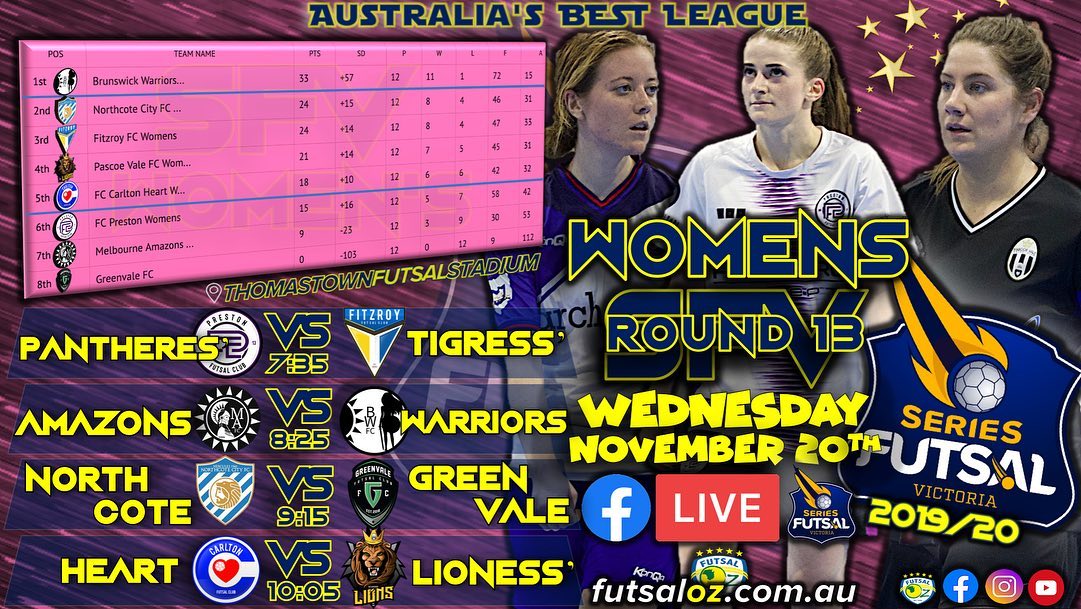 The opening game of the round saw Preston look to keep their top four hopes alive as they took on third placed Fitzroy. The Pantheress’ were on from the start and raced out to a 4-0 lead thanks to a brace from Sky Jensen and singles to Janelle Sammut and a thunderbolt from Elizabeth Eyar having their side in control. A nice piece of play had Fitzroy on the board with Em Coppock tapping home, but from the kick off Preston struck again through Jensen who completed a hat trick to have Preston 5-1 ahead at the break with a blowout on the cards.

Fitzroy steadied the ship in the second half and managed to keep Preston goal less while finding a second goal themselves through Ili Jakab but it would only be a consolation as the damage was done and Preston ran out with a convincing win.

Next up saw Melbourne Amazons take on top placed Brunswick Warriors. In what was expected to be an uphill battle for the Amazons, Brunswick started the better as they got out to a two goal lead thanks to goals from Monica Fonua & Penny Bakopoulos giving them a good start. A penalty to the Amazons saw Alex Sinclair convert to have the Amazons within a goal at the break.

The second half followed the same trend as the first with Monica Fonua firing home twice more to seal her hat trick and all but complete the win, before a late goal from Amazons Mar Pastor gave her side a late consolation as they fell just short against the league leaders.

Next up saw Northcote City continue to push for the top spot as they took on bottom of the table Greenvale. It was Greenvale who took a surprise early lead through youngster Zahara Abou-Eid as Greenvale dared to dream of an upset win. It was short lived however with Eleni Fakos netting twice and Laila Abdullatif once for a 3-1 half time lead.

The final game of the night saw Carlton looking to bounce back as they took on Pascoe Vale. A must win for both sides to take a top four place. A commanding first half performance saw Pascoe race out to a 4-0 half time lead thanks to goals from Anita Caro, Marcela Marques, Bruna Silva & Liesl Woods giving them a big lead at the half.

Carlton sured up their defence in the second half but were struggling to find the net and Pascoe looked to have no problem with it as Caro and Silva both completed braces to all but seal the win, as Carlton got themselves on the board with a late own goal, but it would only be a consolation as Pascoe ran out with a big win.