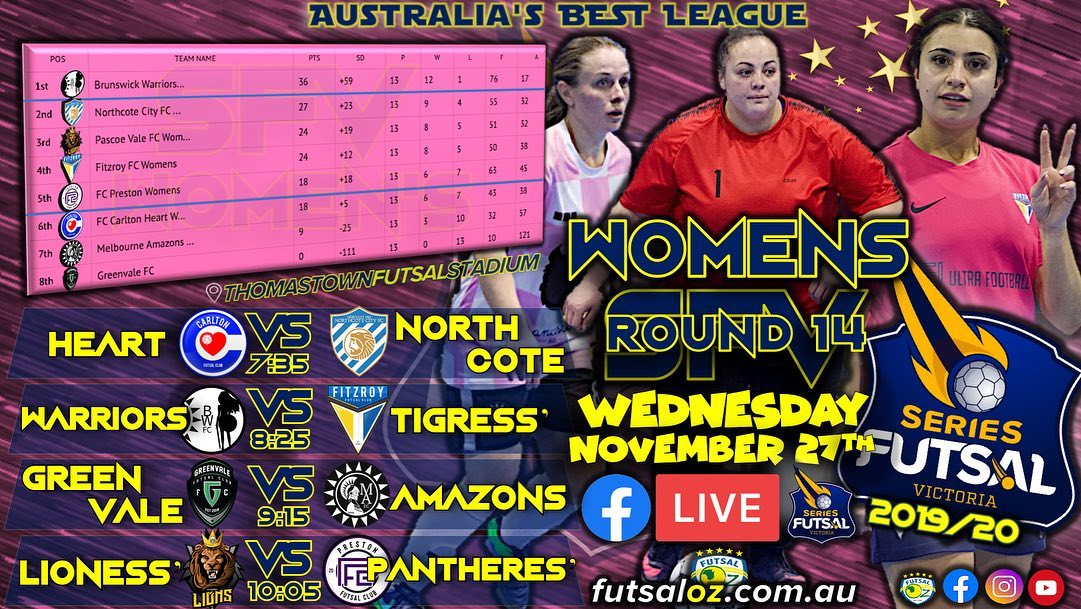 The opening game of the night saw Carlton take on second placed Northcote City as both sides were pushing for the top of the table. A tense first half saw Northcote edge the scoring thanks to goals from Camila Fresneda & Sinem Celepci giving City the lead at the break, while a Rebecca Davies strike kept the Heart in the contest.

Try as they might in the second half Carlton would fall short as Northcote City had an answer for everything the Heart threw at them, with Fresneda completing her brace with a second half goal, while two second half strikes from Mary Hubeek gave them the advantage, before singles from Eleni Fakos & Laila Abdullatif sealed the win for Northcote as they continue to chase the top of the table, while a pair of goals from Alyson Pym and Val Shamoon kept the Heart in it, though it wouldn’t be enough for the points..

Next up saw league leaders Brunswick Warriors face an out of form Fitzroy as they continue to chase the title. The Warriors wasted no time in taking the advantage as a Lisa Fonua strike found the net to give her side the lead, before Fitzroy hit back through a Rebecca Berry strike to restore parody. Brunswick would again take the lead through a Daniella Galluccio strike, but again Fitzroy pegged them back as Berry finished for a second time to see the game head into the break locked at two.

Just moments into the second half the Warriors took the lead for a third time through Penny Bakopoulos and this time looked as if they would hold onto the lead as Bakopoulos struck for a second time to give her side some breathing space. Fitzroy were not going away though as they pulled another goal back through Ange Durston-Ryan to keep them in the game, until a mistake from the Warriors saw Fitzroy draw level when Chloe Romero ran into an open net to level the game at four. Late in the game the Tigeress would find the winner as a lovely bit of play saw Rebecca Saber tap home to seal an upset win for Fitzroy.

Next up saw two sides who sat at the bottom of the table go head to head as Greenvale took on the Amazons as both were desperate for the points. A strong first half from the Amazons saw them build a two goal advantage thanks to a brace from Alex Sinclair and a single to Bianca Lee giving the Amazons the lead, while a single to Steph Pantazopoulos keep Greenvale in the contest at the break.

Greenvale battled back into the game early in the piece and edged their opponents as a second from Pantazopoulos and a single from Chloe Gatt had them trailing by a goal after Bianca Lee gave Amazons their fourth and kept them ahead by a single strike. Greenvale rotten luck continued as an own goal off the head of Cristina Sousa restored the two goal cushion, before a stunning long range free kick from Lee sealed her hat trick and the win for Amazons and despite a late strike from Gatt it wouldn’t be enough as Amazons hung on for the win.

The final game of the night saw Pascoe Vale and Preston face off as both sides were fighting for a top four place. A tense first half saw Preston race out to an early lead before Pascoe pegged themselves back to trail 3-2 at the break with goals from Sidney Allen (2) & a single for Elly Torre giving Preston the lad, while goals from Jess Byrne and Marcela Marques kept the Lioness in the game at the break.

Much like earlier games in the evening, Preston had an answer for everything Pascoe threw at them, as Pascoe managed just the one goal through Clarissa Allerton which would not be enough as Claudia Dimasi & Sky Jensen both netted to seal another important win for Preston.