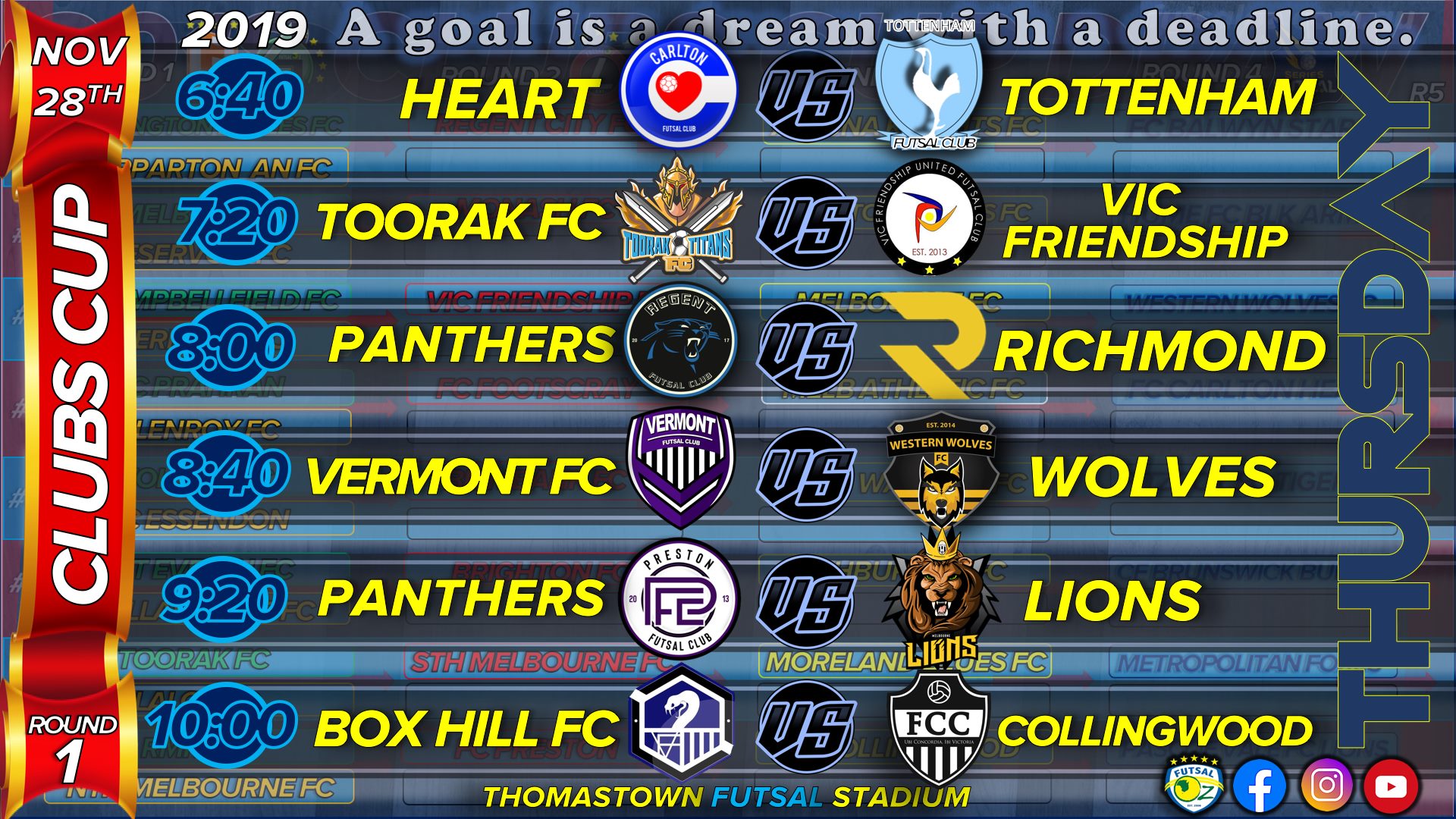 The opening game of the night saw Series Futsal Victoria side Carlton Heart face State League Three side Tottenham. It was Carlton who drew first blood as Harry Robotis lifted the ball over the Tottenham keeper for the lead, before a bizarre own goal brought Tottenham back into the contest. Returning Heart captain Chaaban Rajab marked his comeback with a goal as he restored the Carlton lead, before Rajab doubled his sides advantage at the half time break.

The second half was all Carlton as they raced out to a commanding victory as Rajab finished with a hat trick, while Dylan Govic completed a second half brace as well as singles to Ernie Simsek & Tom Natoli sealed a safe passage through to the next round for the Heart.

Next up saw Toorak of State League Two take on State League Championship side Vic Friendship. A tight first half saw Friendship control the play but fail to put the score on the board as Toorak held their defensive lines to go into the break trailing 3-1 with Kevin Lam bagging a brace and Andres Delgado a single for the lead at the break, while a Mario Gallucci strike kept Toorak in the game at the break.

Friendship pulled away from their opponents in the second half as they ran out 6-2 winners, with Daniel Sousa completing a second half brace to lead his team to a good victory to see them safely through to the next round.

Next up saw Regent City of Series Futsal Victoria take on State League Three side Richmond. Richmond would look to cause another cupset as they opened the scoring through Hayden Paratusic as they dared to dream of a big win. Sadly that is as good as it got for Richmond as their higher ranked opponents turned it up a gear as Shuayb Abdulkadir, Joaquin Jiminez, Yahya Khalif & Josh Sasic all struck for a 4-1 half time lead.

Regent proved too strong for their lower ranked opponents as they piled on a further five goals with Abdulkadir, Khalif & Sasic all bagging braces to guide the Panthers to a crucial win as they progress through to the next round of the competition, while for Richmond they fall at the first hurdle but can take positives from the defeat, with Paratusic completing a hat trick to take some consolations from the game.

Next up saw Vermont of State League One who are in some good form of late face Series Futsal Victoria side Western Wolves. Early on the game was played at a good intensity and Vermont stunned their higher ranked opponents when Alex Stojanovski tapped home at the back post to give Vermont the lead which they carried into the half time break.

Try as they might the Wolves could not get themselves on the board as Vermont doubled their advantage through Alex Husseni to have Vermont dreaming of a massive victory. A late free kick from Hugo Andrew-Leo sealed a famous win for Vermont as they progress to the second round.

Next up was the game of the night contender as Preston of State League Championship took on Series Futsal Victoria title contenders Pascoe Vale. It didn’t take the Lions long to hit the lead as Alisson Lima Da Rosa struck to give his side a slender 1-0 lead which they carried into the half time break.

Pascoe opened the second half on the front foot as they struck twice more through Alejandro Manuel Gomez and Kevin Dos Santos for a commanding 3-0 lead. Preston got themselves on the board through Nikolas Jamieson to spark themselves into life, but all hope looked lost as Jake Besenyi fired home to restore the three goal cushion. A late goal to James Ignatidis would not be enough to see Preston through as their gallant efforts saw them fall short as Pascoe progress to the next round.

The final game of the opening round saw an all State League One affair as Box Hill faced Collingwood. A tense first half saw Collingwood get out to a 2-0 half time lead thanks to goals from their leaders Cameron Holmes and Mark Morgan gave them a good position at the break.

Box Hill battled back in the second half and struck twice through Netra Cheng & Elvis Pjanic, but would fall short as Holmes and Morgan both completed braces to see Collingwood progress through to the next round.