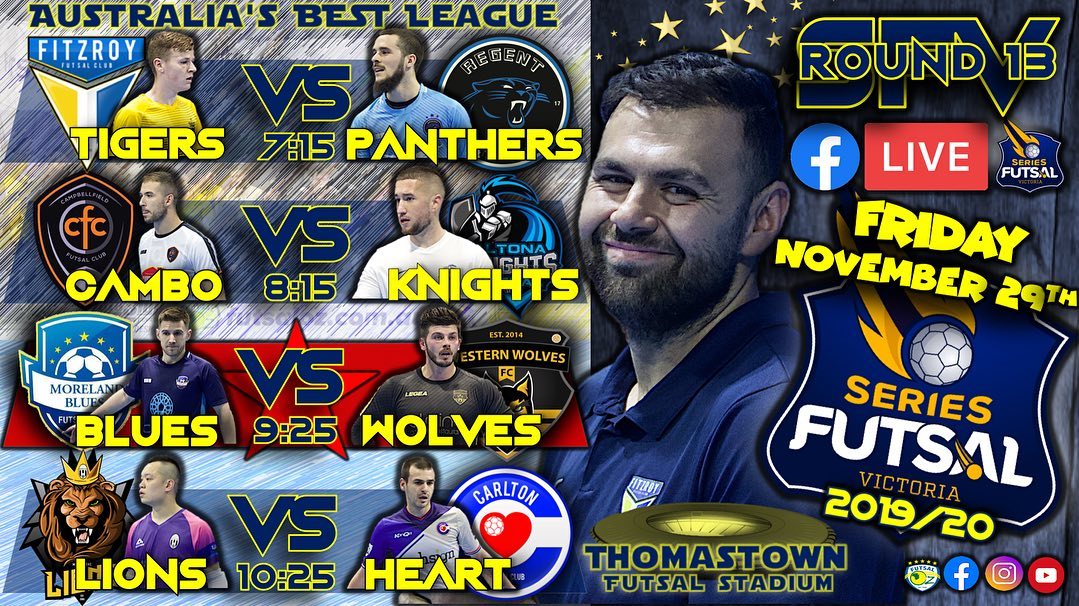 Our opening fixture was a must-win for both sides as they looked to rid themselves of a potential relegation zone finish when Fitzroy took on Regent.

Our first half was as competitive as expected with both sides fighting hard for the early advantage. It was a close encounter throughout, but the first goal to separate the side occurred when Adam El Hayek made a crucial sliding goal-line clearance to ignite a counter-attack that was finished fantastically from distance by Tyler Garner. It was indeed a very well earned goal by Fitzroy, but was cancelled out by a powerful longshot that was saved by Tyler Lewis, but was parried and rebounded off of Abdulkadir Mohamed aka Fundi and into the back of the net to equalise and close the half at 1-1.

Our second half saw drama heighten as Regent took the 2-1 lead early through Ismael Mohamed as he fired from close range. Adam El Hayek would then equalise emphatically as he showed great skill to turn his opponent and open up the shot for himself. A quick reply from Regent is what followed though as Yahya Khalifa struck from just outside the area, followed by loud celebrations as they thought they had toppled the current champions. It wasn’t meant to be though as Sinan Gluhak had his say with an impressive distanced strike to equalise 3-3. The drama wasn’t over yet though as El Hayek thought he completed his brace to win the match with 20 seconds to go, only to see his goal reversed by the referees due to the goals physically being moved off the line before the goal was scored. After all this drama, this one was destined for penalties.

The penalties showcased El Hayek completing a man of the match performance by being the only player to convert in the shootout to win it for Fitzroy.

Our next match was a clash between two promoted sides in Campbellfield and Altona as both looked to prove who belonged in Series Futsal Victoria.

The first half was quite one-sided as Cambo dominated the narrative with Nam Pham scoring to break the deadlock precisely from outside the area. A slow but accurate finish from Henrique Pimenta followed, and a Thomas Brossard goal made it 3-0. Pham would score again with a powerful strike from the left wing and the game was looking to be over early. Pimenta complimented a great first half performance with another left footed strike to make his brace and close the half at 5-0.

Although Altona managed to strike three goals through Jayden Merceica, Andelo Svalina and Sime Brzoja, they were proven far too inferior to their opponents as they fell 15-3. An astounding 6 second half goals from Pimenta, a brace from Brossard to make his hattrick, a goal each for Fabio Albuquerque and Pham meant that Campbellfield found enjoyment in their domination of Altona as players were taunting and showing off for the crowd throughout the match.

Our next clash was a match resembling a derby as Moreland’s Jose Filho found himself taking on his previous club Western Wolves in a match of the night candidate.

This match kicked off in fast-paced fashion as marksman Cosimo Russo early after doing well to beat Hayden Kanjo to open up the space to shoot. A goal from Adam Cooper at the backpost doubled the scoring, but a fumbled save from Felipe Bley allowed Nathan Long to get his name on the scoresheet. Russo would then deny the Wolves comeback by striking well once again and was complimented by Kazuhide Rose’s backpost tap in to close the half at 4-1.

The goals continued for Moreland in the second half as Lucas Vaz finished a goal at the backpost which was complimented by a great Muhammed Temel run and finish. They didn’t stop there though as Russo netted a second half braced to make 4 for the game, and Kazuhide Hirose got another. A well-placed penalty from Jose Filho completed the 10 goals Moreland scored which were met with an Atay Ibrahim own goal to finish the match at 10-2.

Our last fixture of the night was an unpredictable battle between league leaders Pascoe Vale and a hungry Carlton Heart side looking to climb out of the relegation zone with star-player Chaaban Rajab taking to the field after a lengthy time on the sidelines.

Our first half proved exactly why this was the biggest match of the night candidate as Chaaban Rajab proved early why his return to the court was so crucial. A distanced toepoke meant that his side took th e lead from the get-go, and a Stephen Gustus finish into an Aaron Yu-less net doubled the lead. The intensity was fiery as both sides locked horns in search for the next goal, but it was Pascoe who struck next as Joao Da Silva finished a wonder header off of both posts and in. With under a minute to go in the half both sides were going all out but it was Andre Caro who equalised emphatically as he struck from distanced powerfully into the top right corner.

The first half kicked off with Pascoe Vale taking the lead for the first time in the game as Caro made his brace with a low-driven toe poke. It was 3-2 and spectators were making their voices known as the crowd was dominantly in Carlton’s favour. Rajab gave the fans what they wanted when he struck a left-footed shot from distance, hitting the post and going in to equalise emphatically. The teams were inseparable as both sides struggled to break eachother down for the winner, but it was Alisson Lima who was the decider as he struck low and hard as the ball fumbled past David Barra and into the back of the net to finish the game at 4-3 to Pascoe Vale.